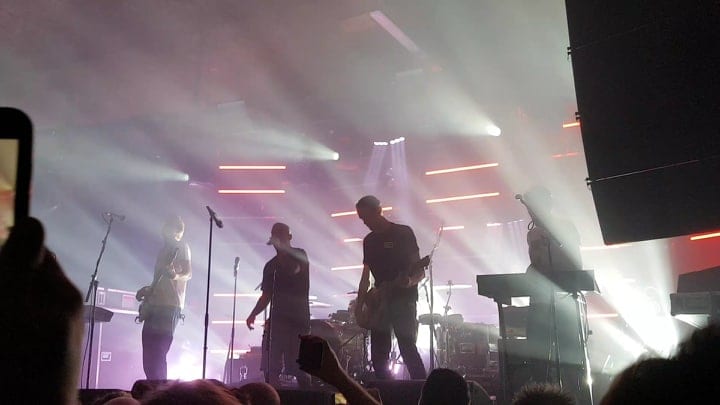 A special event with more of a gig-like vibe than the typical events held at Store Street, Groove Armada performed an electric and funky show for The Warehouse Project on Sunday night. With a performance that breaks the familiar at WHP and a full ensemble to make the most of a closing 11-year-old venue, the band brought everything they could to a crowd of all generations. The main room hosting Krysko, Ishmael Ensemble, and finally Groove Armada, was absolutely packed full of fans dancing along to the entire set. Laser beams and strobe lights bathing the audience in technicolour flashes as everyone moved in time with the pulsing rhythms. The support acts matched the vibe perfectly, with Ishmael Ensemble’s groovy show managing to set the tone of excitement for Groove Armada’s highly anticipated set.

In a genre that’s constantly and rapidly changing, Groove Armada’s music still holds up to their name and their influence on so much dance music in the past 22 years. The electronic music duo Tom Findlay and Andy Cato brought an amazing set with guests including MC M.A.D. — who originally performed vocals for ‘Superstylin’’ and influenced the track’s sound crossover of house, dance-hall, reggae, and dub. Saint Saviour performed most of the female vocals of the night and her cool and entrancing stage presence got everyone in the mood to dance. They started the gig with a quick medley of what must have been 15 build-ups of their most popular songs in a successful effort to build up the atmosphere to roughly 600 people, they held the whole crowd with both their most-loved tracks and even some lesser-known ones.

Some highlights of the show included the obvious classics; ‘My Friend’ with its catchy licks and everyone singing the line “Whenever I’m down — I call on you my friend” to their partners, friends, and to the guys on stage as a sort of homage to Groove Armada and everything they have done for electronic dance music. ‘I See You Baby’ got everyone singing, younger new fans and older more loyal followers danced together to the funky beat in one big party. One of my personal favourites was ‘At the River’, for which the stage and the audience were bathed in a hazy pink light as the gorgeous, more mellow and melodic song began. The live brass player gave everyone in the audience shivers and swept the whole crowd away as everyone joined in repeating the only lyrics: “If you’re fond of sand dunes and salty air, quaint little villages here and there…” creating a dreamy atmosphere of utter bliss.

They finished with their most well-loved and much anticipated original ‘Superstylin’ which amped the party atmosphere (and the strobe lights) back up and had everyone jumping around in time, hands in the air, without a care in the world as their set came to an end. Groove Armada gave me the best night I’ve ever had at WHP – you could tell that everyone in the crowd was loving the groovy dance music and the buzz in the room was like a physical presence. You couldn’t help but smile throughout and for the rest of the night after a set like that.