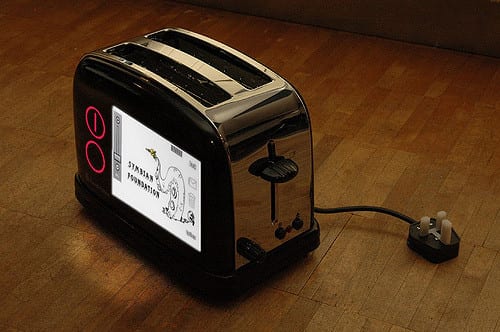 As companies strive to reinvent old products, there has been an explosion in so-called ‘smart appliances’. These are devices that can connect to the Internet, and be remotely controlled through your laptop or mobile phone. The idea has been around since the 1980s and is commonly referred to as the Internet of Things (IoT).

What started with fairly felicitous inventions, such as the smart electricity meter, has evolved to include much stranger devices – the arguably less useful, hundred-pound smart toaster, for example. Has the IoT gone too far?

In simple terms, any object that can connect to the Internet is part of the IoT. The concept involves using microchips or printed technologies to allow traditional electronics to share data with users and with each other. These objects range from kitchen appliances to wearable items (the Fitbit for example), to industrial machines.

In fact, one might not realise, but IoT saturates modern life. Traffic lights, wind turbines, and even vending machines all run on the premise of the automated data gathering and sharing. A large IoT network is currently being trialled in Milton Keynes. Across the city, smart bins send alerts when they need collecting. Smart car parks, that direct cars to empty spaces,  have been installed. Some experts predicting that by 2020, over half of new businesses will be run through IoT principles.

Despite this, consumer uptake of IoT technologies has been rather underwhelming. One study showed that only 9% of consumers trusted IoT appliances. Security (or lack thereof) was one of the main concerns people have with said appliances. Anything connected to the Internet is vulnerable to hacking. While the idea of having your toaster hacked is hardly panic-inducing, the possibility of a hacker gaining access to a WiFi-enabled baby monitor or laptop camera is decidedly sinister. Security experts argue that companies are not doing enough to ensure new IoT devices are sufficiently secure. Hacking a toaster might not only give someone the power to burn your toast but may also act as a back door into your entire network.

An additional related concern is personal privacy. Even if laptop cameras and baby monitors can be secured, IoT devices in the home still gather an unprecedented amount of data on the life and habits of consumers. A smart fridge could analyse an individual’s eating patterns and alert food companies. It has been suggested that the big money in IoT will not come from product sales, but instead from the data gathered by smart items that can be sold to businesses.

While consumers maintain a level of wariness towards IoT, there are no such reservations in industry. Use of IoT technologies has boomed (and is still booming) in industrial sectors. Estimates of the number of IoT devices present in industry range from tens of billions to trillions by 2030. IoT can be used in every step of the supply chain. Smart sensors can analyse products, check for defects, and apply fixes, all without the need for human intervention. These devices have a huge potential for cutting waste and costs.