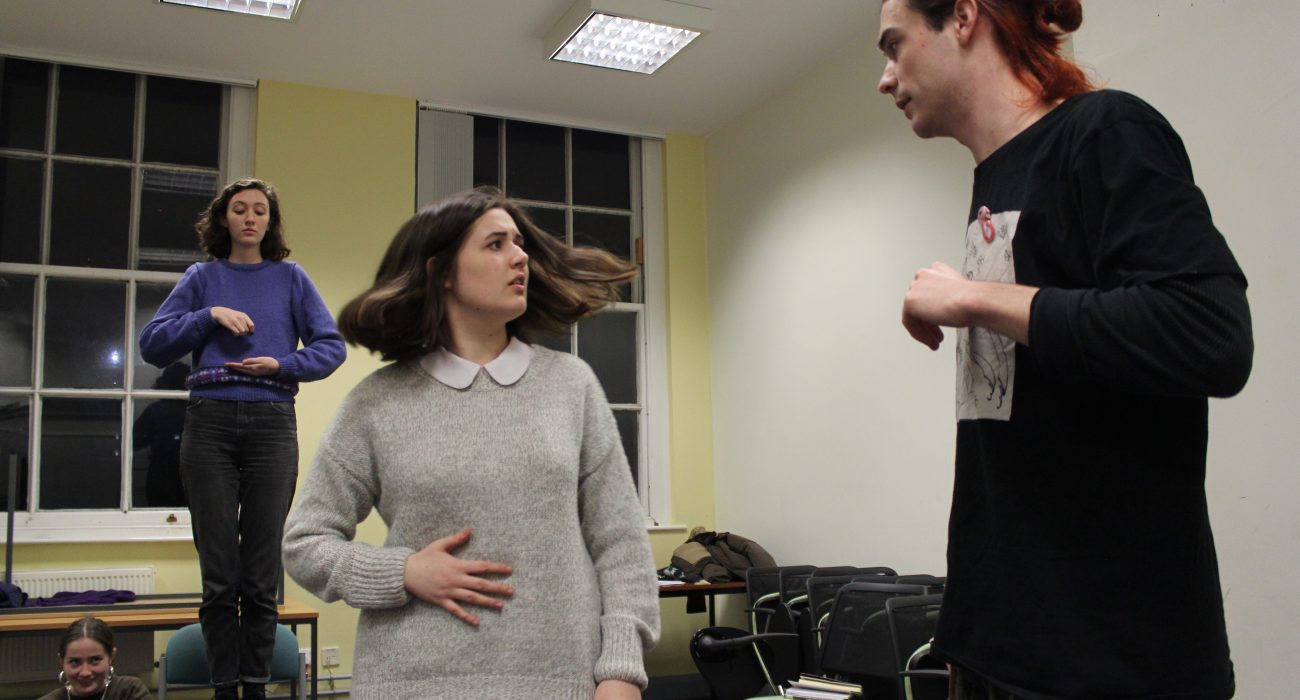 A Place is a psychological piece written by Sass Holmes that tells the story of four characters who end up in a sinister, purgatory-like place together, watched over by three ‘mediators’. Where is this place? The answer is not clear.

The Lady in the Red Dress (Elena Brearly) tells us it is simply ‘here’. With a slightly dystopian vibe, A Place raises concerning questions about life, death, and the ‘gap’ in between, throwing philosophical, moral and religious struggles left, right, and centre. The audience was even integrated into the storyline and became part of the narrative as the play progressed.

In a performance that shifted from complete detachment to overflowing emotion, Elena Brearly stood out as The Lady in the Red Dress, startlingly intense in her portrayal of an unworldly ‘mediator’. Despite remaining in a single spot for most of the play, Brearly’s performance was anything but static. The rest of the cast followed suit, with a stage and set design that perfectly captures the world-shaking (yet at times confusing) tone of the play.

The atmosphere created by the sound, lights, and set design (complete with an image projector) was unmatchable, lending itself brilliantly to the performance given by the actors. The set changes were spectacularly integrated into the performance. Clever direction of Sass Holmes and Radha Bhandari drew the audience’s attention to the changing scenery by removing and adding pieces in slow-motion. Although this was effective in the context of the play and helped to illustrate one of its fundamental themes — time — there were nevertheless occasions where it felt a little too drawn-out.

The plot progressed interestingly; all the characters had a solo focus, before their stories intertwined. This had the brilliant effect of highlighting the talents of the actors. Emily Fitzpatrick and Alex Stevens shone as Husband and Wife; their first appearance as individuals meeting in an art gallery had the audience laughing as they became a painting the couple studied. This tenuous relationship between the audience and the characters remained throughout the play, intensely self-aware in its orchestration and always tiptoeing the line between acknowledgement and obliviousness.

Another amazing performance was Kenan Vurgun as the Priest, showcasing a wavering resolve which declined further as the play progressed. Angelica Fitzmaurice also deserves a mention for her performance of the Girl, capturing the curious and blunt nature of a child incredibly well whilst switching between the extremes of carefree and troubled.

A Place is an incredibly well-structured play, with the repetitive and slow-paced mediators a direct and clear contrast with the other four characters. An interesting conceptual piece with an unmatched atmosphere, the actors excelled in their roles, and the multimedia elements set the play apart. A Place tells the story of  a ‘gap’ between forwards and backwards and also one of hope, darkness, light, struggle, and strife.