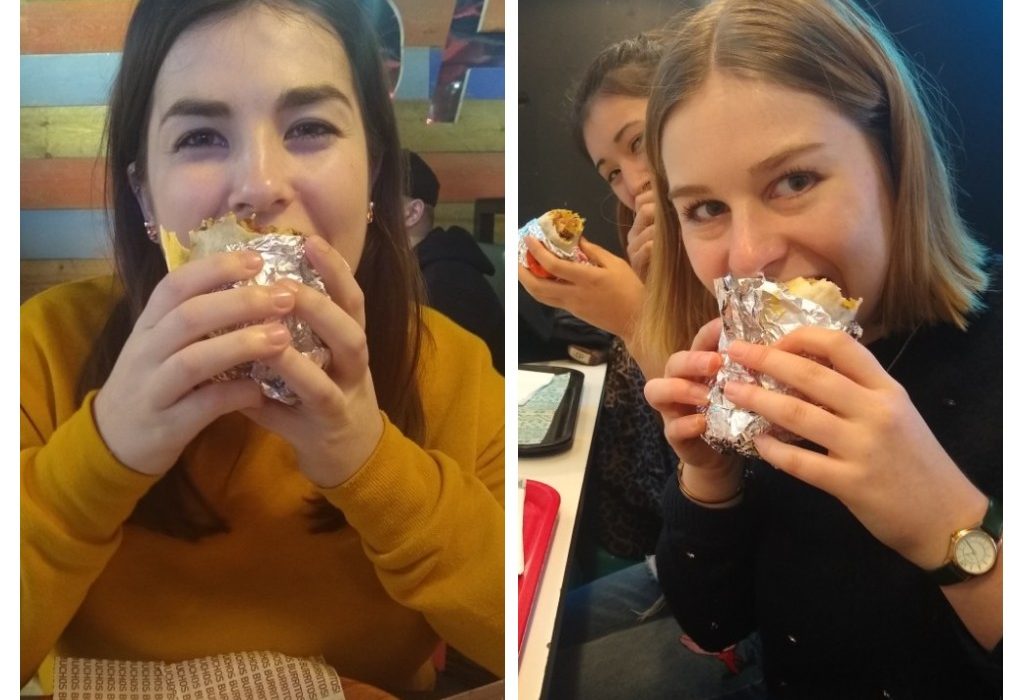 A good burrito can’t be that difficult to make, right? A wrap, some guac, and a tasty filling. Chuck in some optional extras (hopefully free of charge) and you’re good to go. But with so many options, where to go? This is where we come in.

As burrito aficionados, we decided to take one for the team and sample some of the very best (and worst) of Manchester’s burrito offerings. How hard could it be?

First off, we ventured to Pancho’s Burritos, which you can find by the Nando’s near Oxford Road. We’d heard good things — tales of free extras, juicy meat, and excellent student offers. Fresh out of Tuesday afternoon French grammar classes, we were in need of some food for the soul and Pancho’s did not disappoint.

“I had a cheeky glance at the hygiene rating. Five stars, you’ll be pleased to know,” Liv remarked as we went inside.

One of Pancho’s main attractions is the sheer quantity and quality of fillings available. We both opted for large chicken burritos which, with 15% student discount, will only set you back £5.78. You can choose from lots of different additional toppings, such as multiple types of rice and onions, as well as free guac.

Honestly, this was a pretty great burrito. It held its form well and had a lovely ratio of protein to carbohydrate. And the flavours were great, slightly smoky which worked well with the freshness of the toppings. The sauce wasn’t too runny either, which made for a relatively tidy burrito-eating experience.

Chloe even had to reassess her burrito preferences afterwards: “You know what? I think this tops Chango’s as my favourite.”

The next stop, a mere 48 hours later and a result of us having no dates on Valentine’s Day, was Barburrito. Now, normally Barburrito is at the pricier end of the burrito market but, thanks to singles’ night, a burrito and a beer were only £5. Although, shock horror, you did have to pay an extra £1 for guac.

There were a reasonable range of fillings and a good selection of salsa. However, if you choose the meat option, you have to decide between either beans or veg, and with the veggie option decide between peppers or mushrooms. The spice level was well balanced, although overall the burrito was on the blander side. The tortilla wrap had a slightly strange, doughy texture but it did hold together better than some of Barburrito’s competitors.

It was great value with the deal, however, we don’t think it’s worth the usual £7.95 price.

On to our third burrito stop and we were beginning to flag. This time we brought along Amy Wei, our Deputy Editor, who was the inspiration for this burrito tour. She loves the SU burritos, but we wanted to prove to her that there’s more to life than soggy lettuce and mushy chicken. Chango’s lured us in with its £5.95 lunchtime deal, which included a burrito, tortilla chips, and a soft drink.

There was a variety of fillings, even offering crushed tortilla chips, which was a nice touch. The star of the show at Chango’s though had to be the sauce: we both opted for spicy mango and lime, which combined tropical notes with a kick of chilli. After Barburrito, the combinations seemed endless: you could have both meat and veg in the same wrap. The only downside was that the vegetarian filling was a little too runny, and they didn’t drain the beans very well.

Chango’s is a pretty decent bet for a lunchtime treat, although beware the snaking queues outside, a testament to its popularity. 7.5/10.

And now to Chilango’s.

Oh, Chilango’s. What an experience.

We were so hopeful and full of enthusiasm when we ordered, nearing the finish line of our Tour de Burrito. And boy, were we disappointed. Where do we start? The lack of fillings? The wrapping so poor it had a gap bigger than the Grand Canyon? Or perhaps the pork belly so chewy you could have used it as gum. The cheese tasted sour, and the sour cream – well, let’s not even go there. And perhaps the biggest let down of all, the £1.50 extra that you had to pay for the privilege of guacamole. That’s a whole single on the Magic Bus. Having said all this, it was actually the only place to offer prawns, if you’re that way inclined. If you are, perhaps rethink your life choices.

“It’s actually the place that offers the most student discount at 21%, but don’t be fooled.”

We left Chilango’s, feeling like we’d aged thirty years, and with half-finished burritos in the bin behind us. It was a sad, sad end to the Tour de Burrito but hey, you can’t have it all in life. 4/10.

We’d like to give a special mention to the SU burritos, the flame that ignited this beacon, purely thanks to just how upsettingly bad they are. We’ve both tried them in the past and refuse to eat them again. Save yourselves and avoid at all costs. 3/10

So, what have we learned on our epic voyage? Well, wrapping is important, paying extra for guacamole ought to be a criminal offence, and it’ll be a while before we have another burrito …or not.