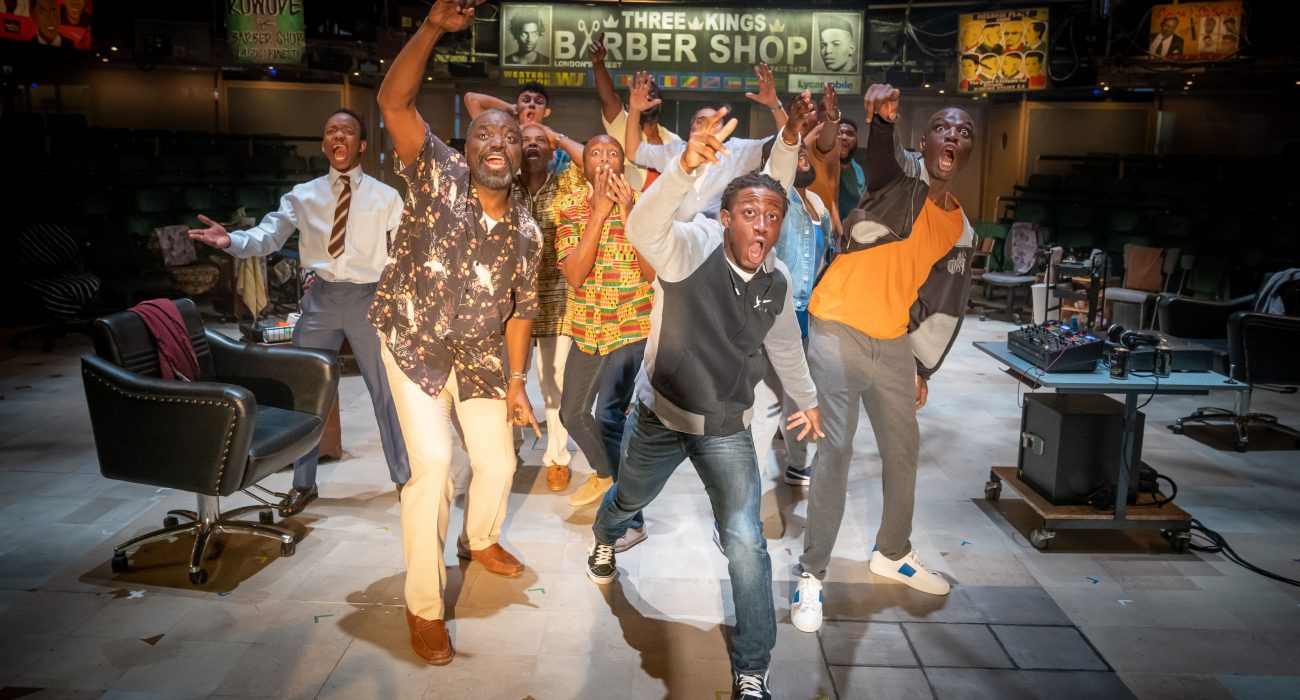 Never have I been so sure I would adore a production simply from the pre-set. The music and atmosphere on stage was electric, as the cast pulled audience members onto the stage for a faux cut in a barber’s chair or just to dance and enjoy the music.

Written by Inua Ellams and directed by Bijan Sheibani, Barber Shop Chronicles was amazing, in the perfect venue of the Royal Exchange (in association with Contact Theatre).

The production spanned across six cities: Johannesburg, Harare, Kampala, Lagos, Accra, and London. Inua Ellams writing weaves a story with connections between the different cities of varying subtlety. From a retold joke, to the same car poster, the same football game to talk about, and the same importance placed on the local barber shop.

This worked so well with the direction of Bijan Sheibani, in each scene when a relationship was mentioned, I found myself waiting to meet that person in a later scene or have different moments referenced. The production was constantly genuine and engaging, no character was overplayed.

The production had educational aspects aswell. Most notably, offering different perceptions of Mugabe and Mandela. The Western view of Mugabe is so firmly against him, but the Zimbabwean characters discussed the good Mugabe achieved and criticised the media for penalising him. Similarly, it was important to see Emmanuel Ighodaro’s devastating portrayal of how disappointed he was in Mandela’s Truth and Reconciliation approach after apartheid. Poignancy does not adequately explain the feelings evoked by Ighodaro.

Language in its many forms and styles was a great motif in the show. Inua Ellams’ writing balanced humorous differences in languages with genuine issues of miscommunication and division.

Possibly most comical was when a character (played by Jovi Servi) accused another man in the barber shop of besmirching Nigerian ‘Pidgin’ English with English. It was extremely amusing to listen to the group of men complain about their children using ‘proper’ English. Whilst hilariously delivered, this scene also acknowledged the worries of a loss in culture with a lack of language use.

The (perhaps) expected conversation about the n-word was also multifaceted in its portrayal in Barber Shop Chronicles. Discussion focused on reclaiming the word from being a derogatory term, as well as the word’s different endings (gg-er versus gg-a), but more unusually, there was a discussion the South African ‘equivalent’ term, ‘k*ffir’, a reminder that whether words are received as offensive can be geographically dependent.

Mohammed Mansaray and Anthony Ofoegbu had great chemistry in their London story line as Samuel and Emmanuel. Ofoegbu was a standout, as he struggled to run a busy barber shop whilst hiding multiple secrets and acting as a quasi-father figure to Samuel.

The scene changes were excellently choreographed by Movement Director Aline David. They were like mini parties in between scenes. The scene changes were accompanied by great music, often sung by the cast members, a wonderful mix of traditional music from the different countries. Mohammed Mansaray’s voice was a standout and the harmonies were a credit to the cast and the musical direction of Michael Henry.

Barber Shop Chronicles’ set design (Rae Smith) created such an immersive experience. The production was further elevated by the subtle changes in the types of barbershop chairs and reversible capes for different cities. The highlight of the set design was the enormous wire globe that spun and lit up the relevant city for the next installment of the story.

Elander Moore’s portrayal of a young actor questioning whether he could be cast as a ‘strong black man’ was beautifully handled. Barber Shop Chronicles did not shy away from discussing toxic masculinity and Ellams’ script created a thought provoking image of absent fathers and failed leaders, leaving your country or motherland, so eventually losing both parents.

We were left with the messages of the safety of a barbershop, where all opinions and feelings can be aired, Ofoegbu reminding the audience that the barbershop is a lighthouse, a place “where men can be men”.

Barber Shop Chronicles was a phenomenal piece of theatre and it is not to be missed, running at the Royal Exchange Theatre until 23rd March.