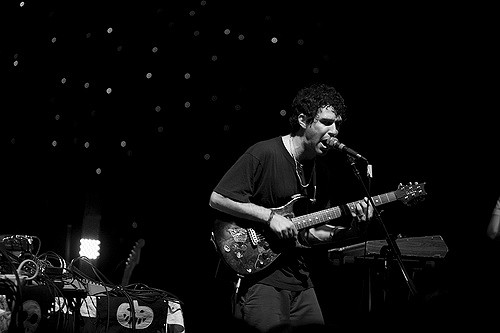 Despite his success as co-founder of the Baltimore-based experimental psychedelic pop quartet Animal Collective, US multi-instrumentalist Avey Tare, a.k.a David Portner, has so far failed to translate this level of achievement into his solo career with his first two releases, 2010’s Down There and 2017’s Eucalyptus, both receiving relatively lukewarm receptions.

However, his third studio album, Cows on Hourglass Pond, has managed to buck this trend with much aplomb and delivered an incredibly interesting psychedelic journey into the mind of an obviously extremely skilled musician.

Sonically, the album presents itself as a psychedelic riff on folk-pop, with the album making extensive use of acoustic guitar and drawing from a wide variety of influences. Whether it’s the almost Spanish flamenco sounding ‘Saturdays (Again)’ or the dreamy synthy ‘Our Little Chapter’, the album is clearly a varied listening experience, but the psychedelic overtones allow it to feel like a complete piece.

In addition to the one-off detours, there is an almost Vampire Weekend-esque baroque pop thread running throughout the album, becoming especially apparent on both ‘Eyes on Eyes’ and ‘Taken Boy’. This, alongside the psychedelia, makes for an intriguing genre fusion and showcases the best of Portner’s musical talents. The album’s best track, however, ‘Nostalgia in Lemonade’, takes a wide departure from the folk-pop overtones and replaces them with a simple acoustic backing peppered with bursts of intense industrial electronic noise. This bleak soundscape is augmented by Portner’s melancholic vocals and completed by his genuinely haunting and strained refrain, “My only lemonade”.

Demonstrated throughout the album is Portner’s uniquely versatile lyrical ability to convey a heartfelt and meaningful message through both traditional and abstract means. His skills are also shown by the confident use of often-heavy distortion to his vocal performance which, as well as adding to the record’s psychedelic aesthetic, makes some lyrics difficult to discern.

Although this may be considered by some to be a hallmark of poor production, in many ways it enhances the themes of the record. This technique allows the lyrics to take a backseat to the overall sonic picture Portner is presenting and still deftly manages to leave no doubt over the message being conveyed.

Whilst considering the album’s psychedelic sound, it is impossible not to mention the absolute mind-bending visuals of ‘Saturdays (Again)’s music video. The utterly surreal video perfectly complements the equally bizarre sounds and deserves an elevated status as essential viewing when considering the consciousness-expanding project as a whole.

Overall, Cows on Hourglass Pond is an inspired work which takes an already exciting musical concept and elevates it to a new level with a range of unique influences. Through the album, Portner has finally showcased his full musical range as a solo performer and has created a sizable buzz for his future work.