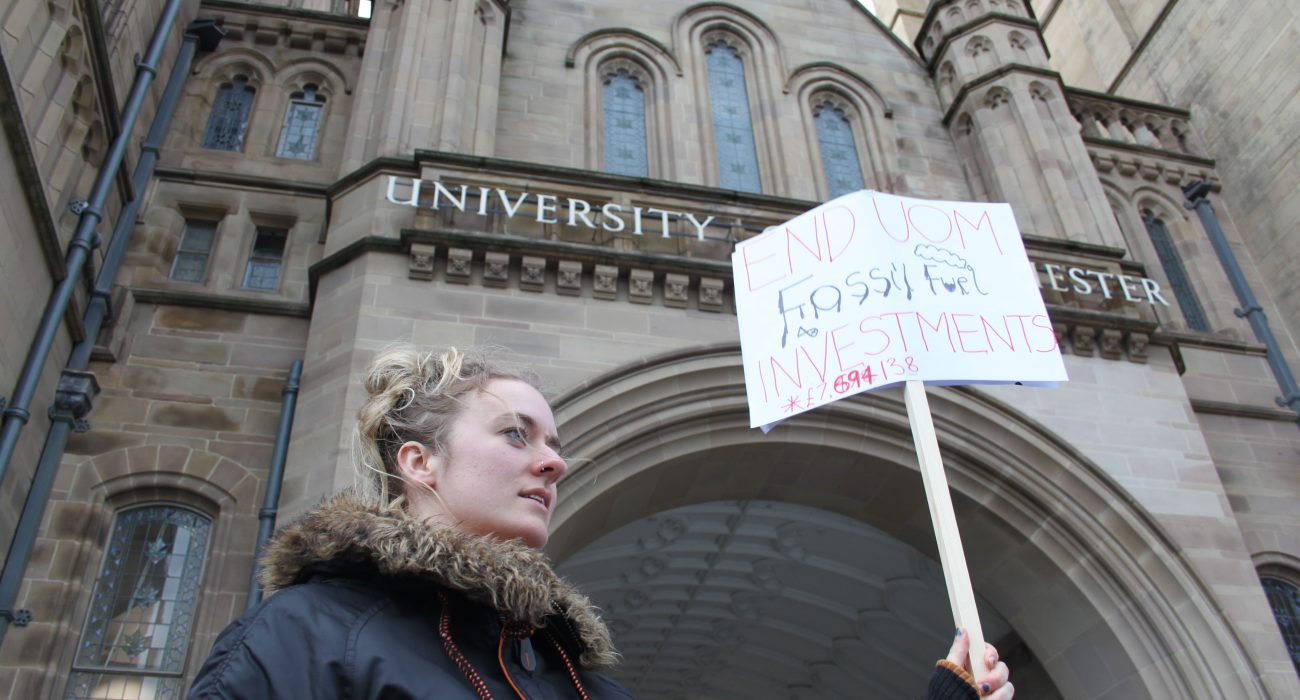 Haughton outside Whitworth Hall for another climate protest. Photo: The Mancunion.

Lizzy Haughton, the Students’ Union (SU) Activities Officer, has glued herself to Barclays’ offices in Manchester City Centre as part of her activism with Extinction Rebellion.

It’s thought that Haughton is one of eight protesters who broke away from Extinction Rebellion’s Deansgate occupation which took place over the weekend to perform the action – which Extinction Rebellion claim is in protest to Barclays’ investment in fossil fuels.

The Deansgate occupation was scheduled to begin on Friday, 30th August and come to a close this evening.

Another SU Officer, Adam Haigh, was seen at the occupation over the weekend, and is known to be an Extinction Rebellion activist. However, there is no suggestion that the Welfare and Community Officer is involved in the Barclays protest.

Ahead of the Deansgate occupation, Haughton and Haigh told The Mancunion in a joint statement: “Extinction Rebellion has had a huge role to play in increasing awareness in the climate crisis this past year, and has seen a number of protests occur, as part of the local group’s efforts to bring attention to the crisis, here in Manchester.

“What’s more, we need students on side; this is our fight for our future among youths across the world, and our educational institutions have incredible amounts of power to lead in this fight that they are, so far, ignoring. We need students to get involved in any way they can in environmental activism and to be able to hold their universities and local councils to account.” 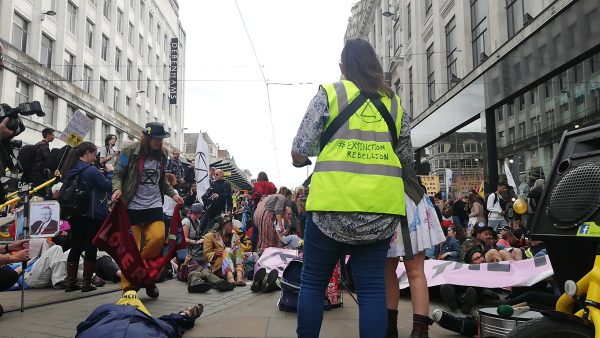 Haughton has been arrested before for action with Extinction Rebellion – back in November, she was one of eight people charged with allegedly “wilfully obstructing the highway” during a protest on Oxford Road.

Extinction Rebellion graffiti has also appeared at Oak House and outside Whitworth Hall in the past twelve months.

However, not every SU Officer is an ardent supporter of Extinction Rebellion, with Access and Liberation Officer Sara Khan telling The Mancunion that she felt the Deansgate shutdown didn’t take the needs of “both disabled people and people who can’t afford to get around any other way” into account, due to the disruption the occupation had on public transport.

Khan added that she did support the Barclays protest, saying she thought it was a “good tactic because hitting at the heart of these companies and institutions is where are efforts are best focused.

“I 100% believe in direct action, I just think it needs to be used in the right way, where it’s targeted at the people in power and the institutions – rather than stuff that might affect normal people with access needs.” 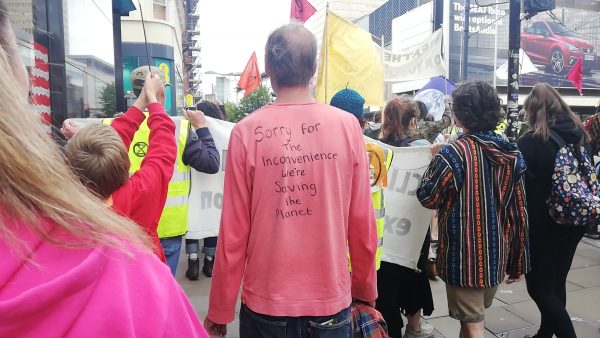 XR believe they are saving the world. Photo: Megan Oyinka

The MEN reported that Extinction Rebellion activists were marching down Great Ancoats Street, causing traffic to be stopped whilst the protesters were in the road.

According to a BBC report, Extinction Rebellion activists congregated outside the Manchester Civil Justice Centre today to show their support to an anti-fracking legal challenge, which seeks to pull an injunction on protesting around Cuadrilla’s  Lancashire fracking site.

A Barclays statement said: “We recognise that climate change is one of the greatest challenges facing the world today and are determined to do all we can to support the transition to a low carbon economy, while also ensuring that global energy needs continue to be met.”

In a statement on behalf of the Students’ Union, Women’s Officer Ayla Huseyinoglu said: “Last year the SU senate passed a clear motion in support of the aims of Extinction Rebellion, and we know that for many of our students the environment is their number one biggest concern, so it’s a false premise to suggest that Lizzy’s activism stops her from delivering other priorities for students.

“As officers we’re constantly working on a wide variety of issues to have the biggest impact we can for students and to amplify students’ voices and concerns.”