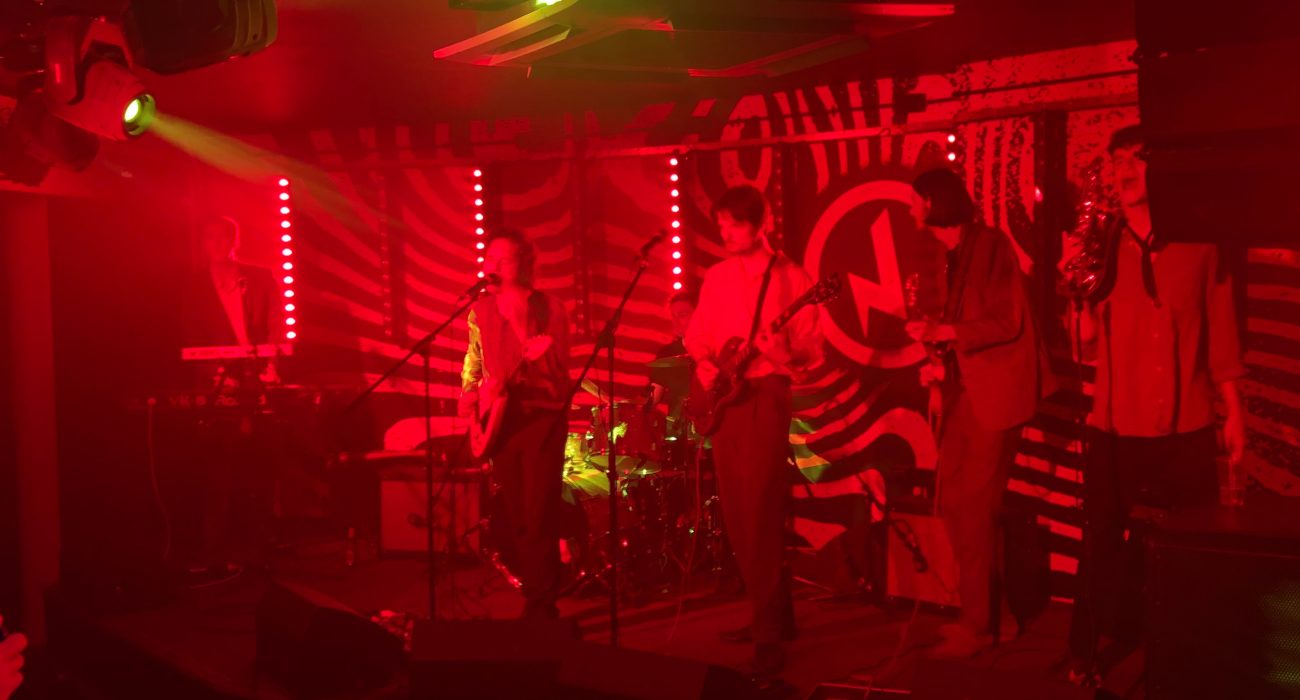 Children of the State at Jimmy's Liverpool Photo: Georgina Davidson

Live Review: Children of the State

Children of the State have emerged from the embers of the music scene in Yorkshire, like many other up-and-coming bands in the North at the moment, to baffle press and fans with their controlled easy vocals and psych vibes.

With clear influences from the 60s and 70s, where music pushed boundaries both politically and instrumentally to reflect changing times and attitudes, Children of the State seem to reflect the mirror in dynamic to the present day. Musically they don’t feel out of place with the releases of their peers; watching them onstage is like stepping back in time to the era of our parents and the juxtaposition of ease and passion that we associate with their generation’s music.

It is clear that the emotion of those early years resonates within their writing; their confidence at times conveys arrogance… which only exposes an evident insecurity not about their production, but about where they stand in a developing and quite frankly not as intellectually advanced music industry at the moment. Their experimental but beautifully curated tracks, such as ‘How Right You Are’ and ‘Kill Your Darlings’ are a testament to talent which probably isn’t going to be appreciated for years to come. Children of the State have developed something that is catchy enough to grace the charts with the right endorsement in ‘I Shiver When I Burn’.

Gracing the new stage at Jimmy’s Liverpool, the group were supported by local bands Two Islands and Filthy Tricks. The former are a four-piece with a lot of work to do to curate their stage and musical presence. Their tracks are bass-led, with firm pop roots, but generic and don’t allow their musicianship to flourish. The set resonated as a series of demos of the same song in a disappointing amalgamation of uninspiring vocals and overproduced backing tracks. Nevertheless, there is promise in their songwriting, and with improvement in their stage presence and crowd engagement there is certainly an opportunity to turn catchy tunes into something more distinguishable and identifiable in the industry.

Filthy Tricks were a surprise. Their excellent musicianship was paired with an easy stage presence which engaged a thin at times room. Clearly natural headliners, with multilayered vocals perfectly synced with strong rock guitar riffs and a killer of a closing track, they seemed at ease in a struggling atmosphere. With perfectly harmonised vocals, there was an evident display of passion and flawless control. Every band member displayed skill and confidence onstage, in what felt very much like a partnership of enthusiasm for their work. By allowing their enjoyment to seep into the audience, they guaranteed their success.

With Children of the State, it was like being thrown back in time. The energy and skill of what was being produced onstage can not be underestimated, their cross between sultry instrumentalism, smooth sax work and bitter lyricism is a momentous move both into the production of the past and a significant and radical step into a new way of writing in the modern age. The onstage detachment from the audience created an almost eerie environment which managed to engage through fascination. However, the audience was clearly too young and distracted to notice the poignancy of what was being produced onstage; Children of the State face a real battle to be appreciated in an industry swarmed with materialism and tacky pop, or the glamour of modern rock and roll. They appeal to neither. Their tracks are experimental, borderline genius, in their writing and production, however they don’t seem to take themselves seriously. If you are going to be so experimental, you need to be able to justify what you’re doing, or nobody is going to take you seriously – as much as they may want to.

Children of the State are a paradox of impressive talent and baffling egoism. With a clear drive to succeed, even if just to pay the bills, they interview poorly at best. Onstage they can convey their passion and talent for their work, but in person they seem to overcompensate by turning their intelligence and modesty into mockery. It will be interesting to see what people make of them, but more interesting to see what they make of themselves in the years to come.