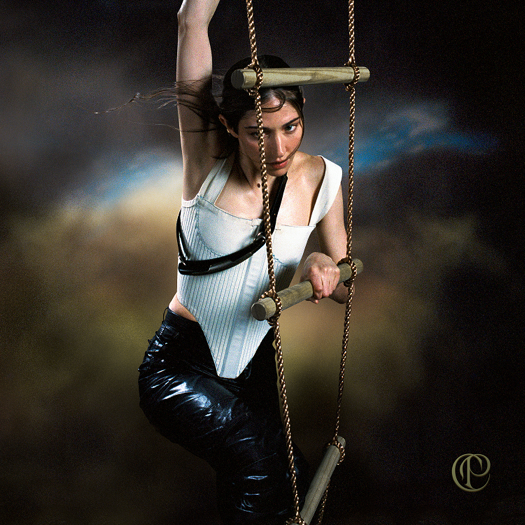 Caroline Polachek is a singer-songwriter and producer who made her claim to fame as part of the indie synthpop band Chairlift which disbanded back in 2017.

Outside of her work with Chairlift, she has released solo music varying from art pop to drone music as well as collaborating with the likes of Beyoncé, Blood Orange, Charli XCX, and Travis Scott.

In mid-2019, she put out a single titled ‘Door’, a 5-minute track which piqued the interest of many, drawing comparisons to Kate Bush. ‘Door’ is a timeless masterpiece which emphasises the art in art-pop with a grand build-up, unique hook, and a brilliant vocal performance over quirky production. Soon after, Caroline announced her upcoming album Pang which was to be her first project released under her own name, having previously used aliases.

Production was primarily handled by Caroline herself and Danny L Harle from experimental pop label PC Music, immediately setting it apart from its contemporaries. Pang features varied instrumentals that reinforce the lush, ethereal, atmosphere of the album. Caroline is a talented vocalist and her performance on Pang is brilliant, demonstrating powerful range and control.

The eponymous title track ‘Pang’ is mesmerizing, with Caroline gasping “pang” in a sticky hook over a simple but addictive electronic loop. She introduces the concept of the album as she describes a “pang” as sharp, sudden feeling whether it be pain, desire, envy or love.

‘Hit Me Where It Hurts’ starts off quiet but the vocals, trap drums and strings turn up, building up to a brilliant chorus and later on, a bridge featuring auto-tuned crooning from Caroline.

‘Look at Me Now’ is a folk-pop song released as a single which implements acoustic instrumentation and a slick melody to fill listeners with nostalgia of past relationships.

Danny L Harle enlists the help of PC Music leader A.G. Cook on another one of the singles, ‘Ocean of Tears’, to make a track incorporating electronic dance music style bubblegum bass’s traditional explosiveness . Caroline’s verses paint a vivid picture of lust and her post-chorus ‘oohs’ are simply euphoric.

The album’s best stretch of tracks is right at the end and begins with ‘Caroline Shut Up’, a self-reflective R&B-tinged song that slows down the tempo. ‘So Hot You’re Hurting My Feelings’ is a bubbly track featuring pop’s more traditional theme of escapism which Caroline executes brilliantly with a simple instrumental incorporating her ‘ahs’ and a fantastic vocal bridge. ‘Door’ closes this run and remains the best song on the album.

On the negative side, there are points on the album where it feels that the production clashes with the other elements, disturbing the album’s flow and coherence.

‘New Normal’ initially has engaging production with a bass loop and intermediate steel guitar twangs, but it lingers on. There is ambient production akin to Enya on the track ‘Insomnia’ but it leaves a little bit more to be desired.

‘I Give Up’ describes a low point in a relationship, and it’s definitely the lowest point on the album. The production features generic drums and although Caroline changes up her vocal inflections, the track remains one of the more tedious affairs. ‘The Gate’ is a rather boring introduction and ‘Parachute’, another ambient pop tune, does a poor job at tying up the record.

Most of the singles released before the album are definitely the strongest tracks on the album. But despite its shortcomings, the album is quite an ambitious musical effort as Caroline Polachek explores modern love over a dreamy soundscape.

Pang is another great release for pop music in 2019 and it is particularly exciting to hear the influence of PC music in a more minimalist setting, posing the question of whether it can cross over into the mainstream soon.