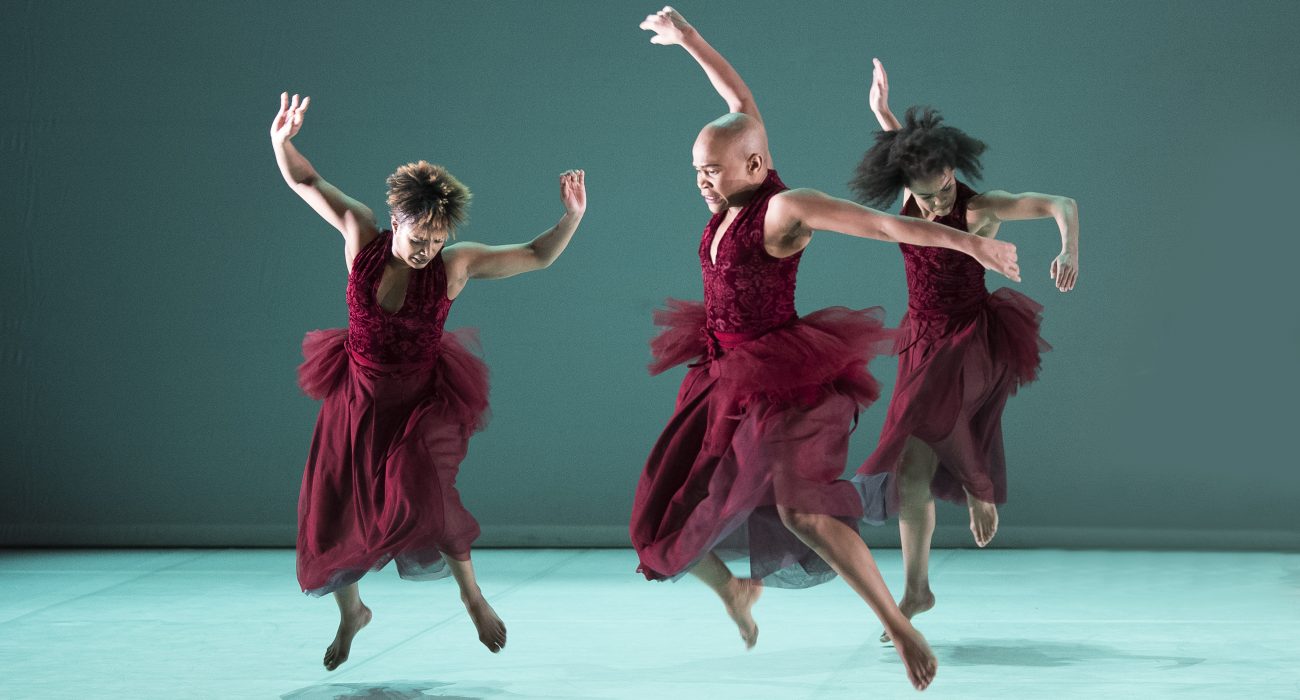 An exciting ballet of rhythm and passion, infused with traditional Tswana dance, South African dancer and choreographer, Dada Masilo showed us that contemporary African dance and ballet can co-exist in her radical reimagining of the classic ballet, Giselle.

Dada Masilo played the titular Giselle. A bold, black, African woman who moved fiercely around the stage, Masilo showed no intentions of being a stereotypical ballet dancer.

This reimagining of Giselle is set in a South African village and sees a peasant girl, Giselle, fall madly in love with Albrecht (Lwando Dutyulwa). However, she is rejected and betrayed by her lover, leading her to die of heartbreak. On the other side of death, she is acquainted with a group of supernatural women, the Willis, who curse men, leading them to dance until they die.

The stunningly simplistic set of a bare stage with a screen at the back was the perfect canvas to begin to layer this visual poetry.

Ballets have a reputation for being difficult to follow, but Dada Masilo’s reimagining of Giselle allows you to unpick the narrative with great ease. The sheer ingenuity of the choreography conveyed a multitude of emotions ranging from ecstasy and love to the hurt and trauma of being betrayed.

The first of the dances was when the lovers meet. This fast-paced sequence effortlessly communicated playfulness and the excitement of falling in love. The couple danced together to the traditional sounds of the beating drum; their fluidity and synchronisation were truly captivating.

As the performance continued, we met Giselle’s mother (Sinazo Bokolo), a drunk whose skewed perception of love became increasingly uncomfortable. She forbade Giselle to see Albrecht and proceeded to strip her, beating her breast with a broom, whilst exclaiming: “I do this because I love you.” Bokolo played ‘cruel to be kind’ fantastically, with her hysterical sobbing at the side of her daughter’s corpse silencing and touching the whole audience.

Yet, she was also the comedic relief of the ballet. Her impassioned rant of how beer was her best friend evoked laughter, and seemingly some agreement, from the audience.

Later on, at a function, Giselle saw Albrecht dancing with another woman. He was no longer in the attire of the peasants; he wore a rich blue, silk outfit, denoting he belonged to the upper-class. Giselle’s feeling of betrayal was communicated exquisitely through a solitary dance until she finally perished on the ground. It was beautifully sombre and macabre.

As the piece ran for only 70 minutes, there was no intermission, but, rather, a few minutes break at the end of “Act 1”. After it, we entered the ‘Land of the Wilis,’ a supernatural world inhabited by fierce women dressed in dark red dresses, who prey on men and force them into a dance of death, in real “Hell hath no fury like a woman scorned” fashion. This idea of a spurned woman dying of heartbreak and returning to punish men is a little sexist, but this production seemed to showcase a feminist revolution of sorts. It was like a visual representation of Slyvia Plath’s Lady Lazarus: “Out of the ash, I rise with my red hair, and I eat men like air…”

Myrtha (Llewellyn Mnguni), Queen of Willis, summoned Giselle through her spellbinding and darkly ritualistic movements. Mnguni was captivating, mesmerising and awe-inspiring; she could lure the purest of souls to the dark side with her rich, bold and formidable performance.

Dada Masilo has solidified her place amongst the best contemporary ballet choreographers and dancers with this production. It challenged the notion that ballet is a European art, and also the unfortunate opinion held by many people – including some avid theatregoers – that ballet is boring and/or difficult to watch.

Dada Masilo has not just modernised a classic ballet in terms of adding a beat and an increased pace, but she’s also called into question the politics of ballet.

Written by sophiahadjimichael and Jay Darcy