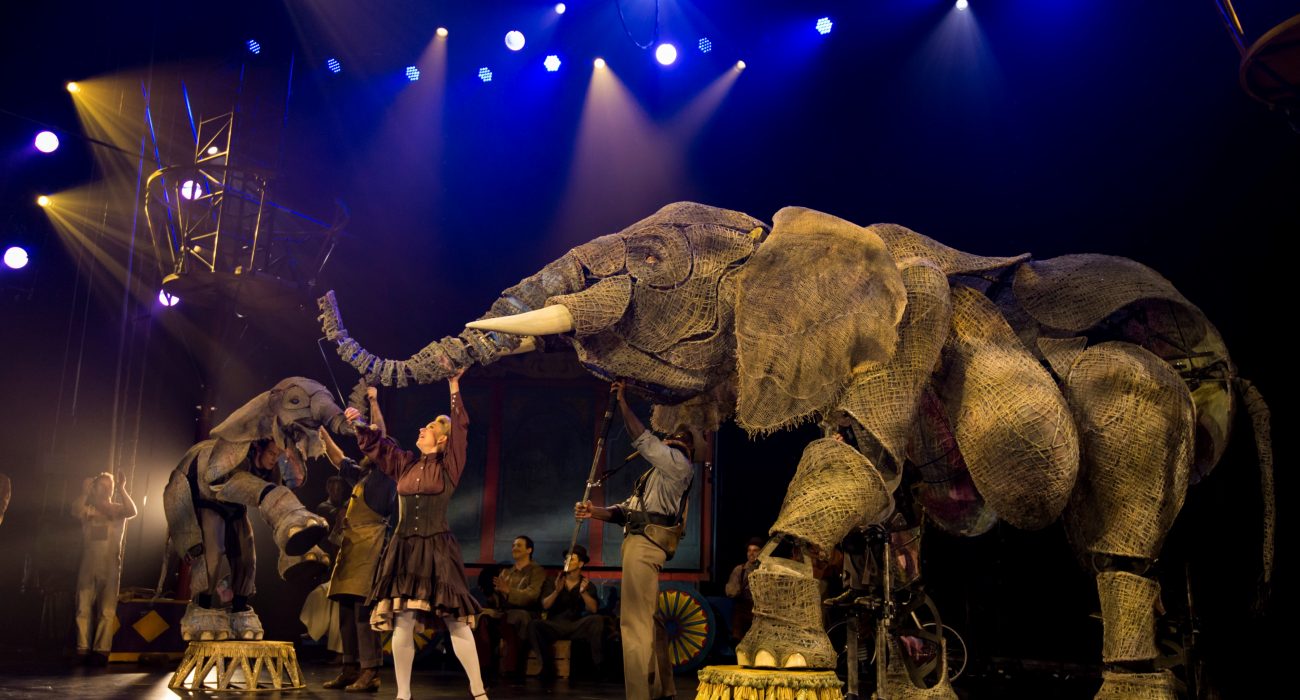 Circus 1903 is what it says on the tin. A circus in the style of one found in 1903 is built before our eyes as we are drawn into a series of acts including juggling, contortion and puppetry. Very much a part of the show, an orchestral backing (City of Prague Philharmonic Orchestra) provided the perfect backdrop for acrobatic and prop based acts alike.

An impressive opening showing the size of the cast swiftly lead into a trio of acrobats propelling each other into the air. Combined with careful choreography, this scene turns the stage into a circus, a showground for the acts that follow.

These included all the usual suspects: the juggler spun his clubs faster than any other I’ve seen, and the hula hooper aimed to spin as many hoops as she can while walking a golden sphere around the stage, but among these were nestled a few unexpected pieces.

A balancing act held the audience on edge as an increasingly tall stack of pipes wobbled under a sure-footed performer. An acrobat somersaulted high above the stage as her partner tossed her into the air, neither of them ever missing a beat. And the pièce de résistance: a pair of elephants – not real, of course – designed by the creative mind behind War Horse (Mervyn Miller), which allowed the early 20th century show to remain true to its time period while showing off the abilities of a truly talented team of puppeteers (and not harming animals!).

Further performers included a contortionist who smiled widely before shocking us with a series of increasingly impossible-seeming twists and bends, a hand-balancer who teetered at the top of a swaying tower, and a pair of acrobats – one of whom was spun and flipped on the other’s feet.

Also worth noting is the aerial piece in which a couple demonstrated the trust between the two of them in acts that elicited audible gasps at times. This piece was one of my favourites, because of the way in which the performers showed their technical skills and strength while maintaining a natural elegance and intimacy.

Unfortunately, the show was supposedly strung together by a ringmaster who seemed to still be living in 1903. He performed small magic tricks with children that he brought on stage, which on the whole were pleasing, but undermined this by making uncomfortable jokes (of a bearded lady who turned out to be a man: “or should I say gender-neutral person?”). He also took as long for each performance as each of the acts, which made for a test of patience between otherwise dazzling spectacles.

Overall, the show encompassed many elements of the perfect circus. Great music, choreography and, most importantly, amazingly skilled acts, were only lacking a talented ringmaster to become the show they were aiming for.