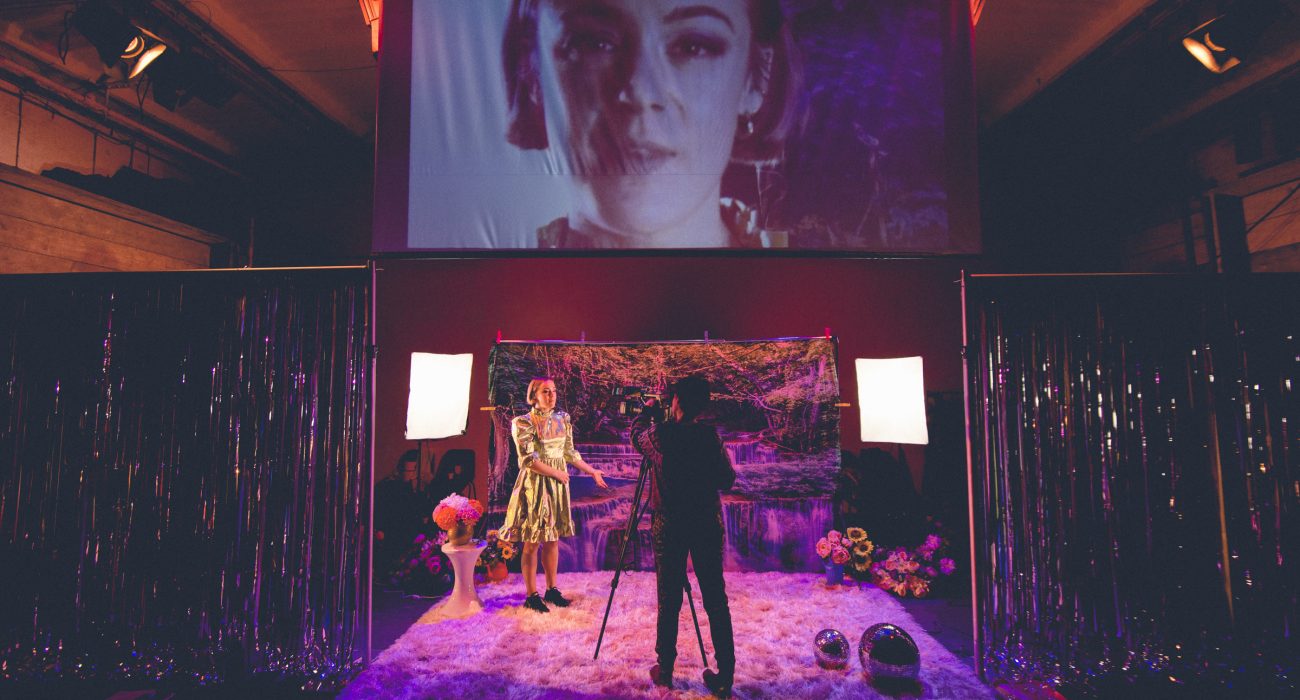 Performed at The Royal Exchange Theatre, Super Duper Close Up is a ‘tragicomedy’ which explores one woman’s attempts to navigate a life where everything is online.

We never learn the name of the star character, played by Jess Latowicki, even though as the performance progresses, we know almost all the details of her life. As the name Super Duper Close Up would suggest, the show really does get up close and personal. Latowicki starts the performance at the back of the stage, moving closer with every scene transition.

This culminated in Latowicki taking a seat in the front row of the audience. A camera onstage films her, the footage playing in real time on a screen above the stage. As Latowicki twists and turns in her seat to interact with the audience as she continues telling her story, the camera stays focused on her. The intimate feel of the production grows stronger and stronger as the distinction between performer and audience is broken down.

The message is clear: even when we’re alone, we’re made to feel like we have to perform.

As Latowicki gets closer to the audience, her story becomes more personal. What at first seems like a trivial inconvenience is revealed to run much deeper. Jokes about being early for a meeting quickly turns into an anxiety-ridden inner monologue revealing deeper fears. Set against a backdrop of online culture and the increasing need to broadcast yourself to the world via social media, the situation quickly escalates from mundane to out of control.

Themes of anxiety and stress are present throughout the performance. Latowicki narrates a seemingly ordinary event, speaking faster and faster until she is left gasping for breath. This spiralling is closely connected to her rocky relationship with social media, as she scrolls through different apps to try and reduce the panic. Jess Latowicki is brilliantly dynamic in her performance, possessing a masterful control of the atmosphere and emotion of her audience.

Super Duper Close Up explores the difference in what people post online and the realities of their daily life. It is a performance which asks a lot of questions. How can we know what direction our lives are going in? How do you plan for a future in a world with so much uncertainty? Does posting about it online matter? Does anything matter?

Funny, thought-provoking, and deeply existential, Super Duper Close Up is a performance perfectly fitting for a 21st century audience. Asking more questions than it attempts to answer, the undeniably raw performance is a must-see for philosophers and Facebook users alike.