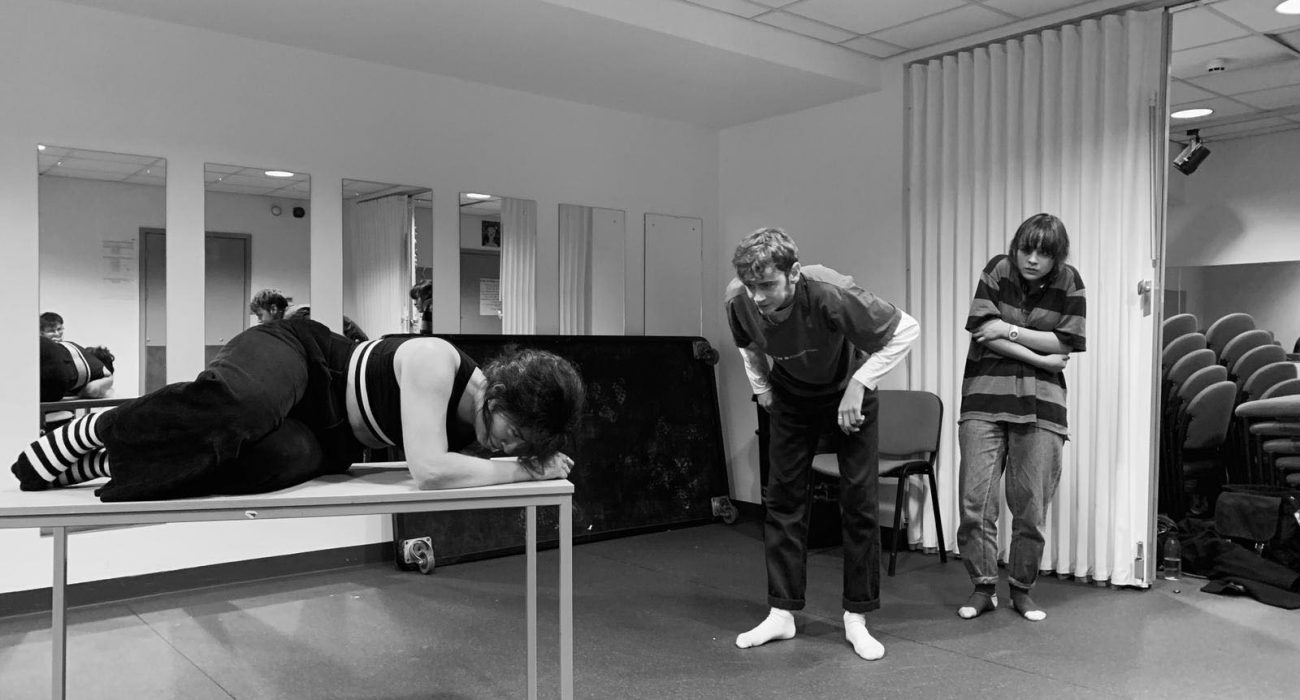 Thomas Thacker’s Gorgon Westley’s Railway Circus tells the story of Euean (Willow Major), a young boy who, after falling asleep in a railway carriage, finds himself trapped on a runaway train with an unknown destination.

To find his way off the train, Euean ventures through the carriages, meeting a twisted troop of self-mutilated oddballs overseen by the ominous Gorgon Westley (Laurie Bayley-Higgins).

Each carriage is a harrowing cage, its inhabitants deranged and wrathful. They drag Euean into their torturous existence in which salacious toad, sado-masochistic clowns, a self-mutilating tight-rope walker and Gorgon Westley himself all dwell, waiting to inflict pain. Each member of Thacker’s cast is an asset to the realisation of his tumultuous world.

A standout performer is found in Laurie Bayley-Higgins as the eponymous Gorgon Westley. He stalks the stage with vocals and physicality both intricate and strong. He is at his most terrifying when writhing beneath the carriage, in hunt of Euean, in the final scene of the second act.

This horrifying moment, which undoubtedly required fantastic direction from Thacker and Bez-Cryer, is heightened by Major’s performance as Euean. She encapsulates the pure terror and consistently raises the tension for each morbid scene through her engaging characterisation.

Yet in amongst the horror, Thacker’s script features wonderful moments of light and shade. Eloise Russell as Reap Galo and Sofia Armella as Howitz, both bring a great energy and humour to the show. Cali Nice and Lenny O’Sullivan give enthralling performances as the cock-crossed lovers, Herpe and Cyst, with infallible characterisation.

The play is also in debt to the musical talent of the cast and crew. Eins, the MC played by Giulia Grillo, is the first to welcome us to the railway circus in cabaret style through song and clowning,  stippled with imaginative innuendo. The creative team, consisting of Thacker, Raphael Bez-Cryer and Ted Walliker, also perpetuate a claustrophobic, eerie atmosphere through the show’s music.

A particularly resonant moment was in Euan’s first interactions with the gluttonous Cardinal (Hugo Lewkowcz) whose tirade on human existentialism is underlined by a dissonant horn parodying every pompous line. In this moment, Thacker’s nuanced scriptwriting truly shines as he highlights the Cardinal’s hypocrisy.

Situated in the Peer Hat, the cast and crew had a tiny space to work with, and in many ways, this aided the suffocating atmosphere the show produces. With one exit and entrance, the cast did well to manoeuvre props and furniture off and on stage, yet sometimes characters would remain on stage with no other function but to watch over the main action.

On a technical note, however, I would like to congratulate the creative team on their props and make-up – moments of horror or intimacy can easily be undermined in a play by poor makeup and cheap props. However, the creative team of Gorgon Westley delivered in dark bruises, bloody incisions, bodily fluid, pulverised beef tartare, vomit and eyeballs galore. Nearly every scene produced a moment of gleeful repulsion that amplified the play’s gruesome tone.

Gorgon Westley’s Railway Circus is by no means a comfortable ride; it is a dark, perverse fairy tale which unrelentingly twists and turns just out of reach. The world Thacker has created is cruel and what at first seems a dark fantasy to Euean soon becomes a brutal reality.

His dreams of gardening are mocked, castigated and rebuked by all those he meets. He struggles to find an emotional connection to the material world he now exists within, and the relationships he does find are violently torn away from him before his very eyes. The runaway train is a journey and throughout I could not help but feel that life really does seem to imitate art :

“To live and love in this world is to fight.”

The imagery evoked by Euean’s dialogue of love, growth and nurture vividly contrast the relentless machine bearing him to his destination. His act of planting a seed in a corpse in the penultimate scene is akin to a glimmer of hope for a world on the verge of environmental collapse.

Thacker’s intricate language and prolific imagination is something to be in awe of. His creation of a deeply layered fantasy world left me with the same passion for stories that I felt after reading Neil Gaiman.

I look forward to seeing further productions, and I have no doubt the show will benefit from a shorter running time and hopefully a larger space at Edinburgh Festival Fringe this August.