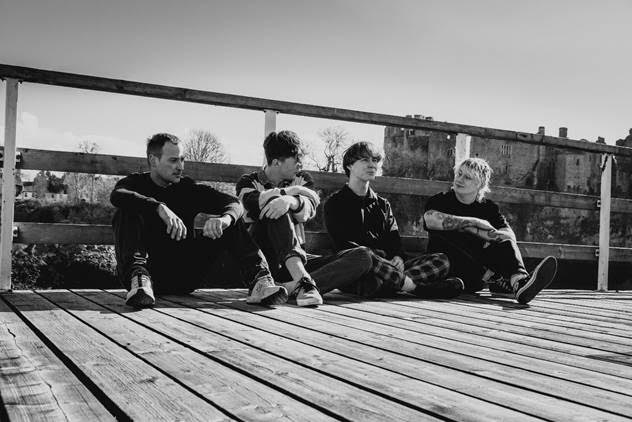 Sub Cultures are an exciting alternative indie four-piece band with members from South Wales and Gloucestershire. Their debut self-titled EP will be released on the 26th March via Prank Monkey Records. Ahead of this, I called frontman Kane Radnor to chat about the band. We discussed their influences, how the pandemic has affected their work, and what the future holds for the group.

They’ve been compared to DMA’s and The Night Café which Kane says are some of ‘his favourite bands’. But their influences are eclectic, ranging from 90s and noughties alt-rock bands to The Cure, whom Radnor is ‘massively inspired’ by.

The band’s name came from a piece of art by a friend of theirs. Kane explains it was a picture of ‘lots of different people belonging to different subcultures like goths, emos, rastas and skaters’ . He mentions the name also reflects the band’s wide range of influences. I asked Kane if he were to belong to a specific subculture, what it would be? He decided on skaters, enthusing about Bristol’s thriving skate scene.

Having members in both England and Wales during the COVID-19 pandemic has made rehearsing and writing difficult for Sub Cultures. Yet, Kane tells me the band has been ‘optimistic’ about the situation, and has been able to adapt to using online platforms such as Zoom to plan and share ideas.

However, in September last year, the boys were able to travel to Rockfields Studios in Monmouthshire, Wales. The legendary studio which has hosted names such as Oasis and Manic Street Preachers, to record their new EP, an experience that Kane describes as ‘surreal’.

The opening track ‘Comedown’ is 2 minutes of pure energy. Soaring guitars and infectious basslines from Charlie Foster feature heavily throughout the EP, and this track is no exception.

Lead single ‘Enjoy Yourself’ erupts in a similar vein and is sure to be a hit with audiences when the band can play it live. The lyrics are relatable, clearly inspired by various lockdowns in the UK (‘you find yourself at home with nowhere else to go’), but also optimistic. The instrumental section in the final minute already brings to mind roaring festival crowds.

Sub Cultures have previously toured with Northern bands such as The Pines and Violet. Kane explains ‘We’re more of a live band […] we play all the songs a little bit differently live than we would on the record’. He can’t wait to get back on the road, and hopefully play some more festivals in the future.

Third track ‘Friends’ takes a different turn, slowing down and allowing Radnor to show off his vocals. Done so over smooth guitars from Lewis Perks and steady drumming from Eric Karvik.

‘Ride with You’ is a brilliant finale to the EP, with its catchy chorus (‘step out my car I don’t want to see you anymore’) and quick changes of pace showcasing Sub Cultures’ more experimental side.

Asking Kane to describe Sub Cultures in three words, he responded with ‘rough, punky and energetic’. Hailed as ‘indie heaven’ by Last Day Leaf, Sub Cultures’ eponymous EP with its distinct sound certainly establishes the band as one to watch in 2021.

‘Sub Cultures’ EP is available on 26th March 2021, but you can stream lead single ‘Enjoy Yourself’ on Spotify now.