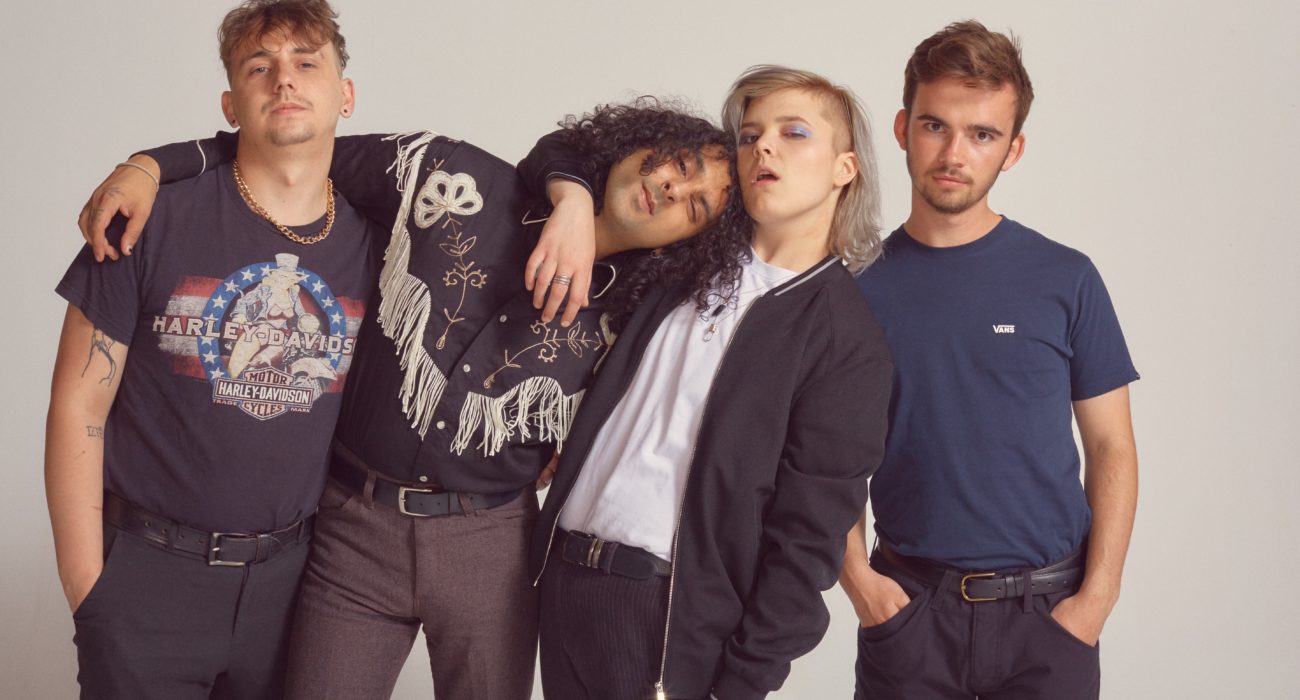 Indie-pop quartet BLOXX are on the rise. Having released their debut album Lie Out Loud last year, followed by a stellar EP Pop Culture Radio this summer, the group are set to embark on an extensive UK tour this October. Consisting of Fee Booth (vocals/guitar), Taz Sidhu (guitar), Mozwin Noronha (drums), and Paul Raubišķis (bass), BLOXX are creating relatable and inclusive anthems for a generation of indie-rock fans.

The Mancunion caught up with BLOXX’s Fee Booth to talk new music, finding inspiration, and life on the road.

You released your latest EP Pop Culture Radio in August, how has the response been to that so far?

Really good actually. We were quite eager to get stuff out the other side of lockdown. So, we were quite happy with how it went down at radio, especially how everyone gets on with ‘Everything I’ve Ever Learned’ which is a big song for us.

Tell me a bit about the meaning of that song.

One of those songs will probably mean a lot to us as a band for a long time. Especially me cos I wrote it in lockdown when I think everyone was going through a lot things that were really tough to make sense of. Now that’s the song we end our set on, and every time we’ve played it over festival season and on tour it’s made me a bit emotional. It’s a really important song for us.

Bloxx released their debut album Lie Out Loud last year during a pretty weird time. How was the recording process different from the EP now?

The album was recorded in 2019 before the pandemic so it was in a studio, recorded as music should be done. The EP is the product of me and Rich Turvey who I co-produced with. Me being in my shed until 3am every night doing vocals and guitars and firing them up to Liverpool over email and getting a nice finished product back. It was the first time we’d released something that hasn’t got the boys on but you have to adapt in situations like that.

How important is the production aspect to you? Do you prefer having more creative control or working with other people?

I love both really. I liked being able to get different opinions from other creative people. But I do have a bit of a complex over wanting to be in control of production. I want things to sound like how they do in my head but it’s not always possible. I’m in the middle-ground. I like getting other people’s opinions too.

What’s the creative process for BLOXX? Do the lyrics come first or the music, or is it a collaborative effort?

I usually find melodies first but I do things in different orders… sometimes I’ll start with a chorus melody, find the words to it and then realise it’s not actually a chorus but a verse and write a completely different chorus. Recently I’ve been writing notes on my iPhone of lyrics and then transforming them into songs with music behind it. It really just depends on the day.

Where do you find the inspiration for lyrics?

I’m very cut-throat and an open book with my writing. A lot of it is things that genuinely have happened to me or are happening to me now. The best way to break the mould is to completely break the mould. Being very colloquial in a sense with your lyricism and the subjects you write about. The things I write about…they’re so personal to me. When you have that personality through your music you can connect with other people.

Where did the band name BLOXX come from?

The floor [laughs]. It was on a piece of rubbish and we liked it.

In terms of the visual aspect of being a band, how important is design and music videos?

It’s important I think in the sense of a marketing strategy and all of that business stuff. Deep down I feel and I’ve always felt this, yeah visuals are important and they should match the aesthetic and the vibe. But sometimes there’s too much of an important placed on the aesthetic. If something sounds good, it sounds good, and how it looks shouldn’t matter. Sometimes they go hand in hand. I like to look like we know what we’re doing and cool and professional. We used to play shows back in the day in shorts and t-shirts cos we didn’t know what we were doing. I do think it’s important to carry yourself in a certain way to be taken seriously as an indie band or a pop band or a rock band. It is important to some extent.

As a band, do you feel that you fit into one box in terms of genre?

No, I don’t think we do. Music nowadays is so genre-bending and you’re able to cross boundaries. For us, going from our first single ‘Your Boyfriend’ to where we are now, as similar as they might be, in between there we have adapted our sound and grown into something else. That’s why I never say we’re an indie band. Because we’re not an indie band, we do indie-pop, and dream-pop, and indie-rock. The genre just keeps broadening.

Obviously with the COVID-19 pandemic, you couldn’t tour the album properly… How were the festivals you played this year?

Festivals are really really fun. I love a good festival. Nothing will ever top playing the Radio 1 stage at Reading and Leeds in 2019. That was such a pivotal moment for us. Then we got hit by the devil’s work.

You’re about to embark on your first tour in a long time, what can we expect?

Probably a lot of mistakes [laughs]. We’re not gonna play the whole album in full because I don’t think anyone does that. But it will be the longest set we’ve played on a headline tour because we’ve just never had the music out there. Before the album came out we could only do a 40 minute set but now we’ve got enough to fill a good hour and a half. You can expect a really good show and incredible vibes! Manchester is always really good to us. We love the Academy. We’re a bit scared because its our first headline tour in 2 years but we’re raring to go!

Do you have a favourite Manchester venue?

We’ve played nearly all of them I think, either ourselves or supporting other people. Our last headline show at Manchester was at Night People. I love the [O2] Ritz!

What songs have you enjoyed performing the most or what ones are you most excited to perform?

Yeah, ‘Everything I’ve Ever Learned’ and ‘Coming Up Short.’ The ending songs of our set are the ones I really take a moment for. Maybe we should make them the encore [laughs]!

Charismatic, outgoing, and inclusive! We have a very broad spectrum of fans and that’s why I like to write music that they can relate to.

What does the future hold for BLOXX?

We try to take each day as it comes but I am working on the second record. It’s kind of in the realm of the EP. We’ve adopted this new sound that’s bit more guitar-y, a little bit left of the first record which was more pop-y.

Is there anything you’ve been listening to recently which has influenced it?

I’m a bit of a freak for guitar music. I’m a fan of The Band CAMINO and COIN. I’ve been quite influenced by my earlier writing which I went back and revisited. Back then I was listening to Western emo bands like Modern Baseball. Also, Bombay Bicycle Club and Jeff Buckley. Just really honing into that guitar music sound.

Is there anything else you’d like to talk about?

The message I want people to take away from our music, and especially with ‘Everything I’ve Ever Learned’ is that sometimes it feels like everyone’s fine but collectively we’re all going through stuff. Talking about things is so important and being open. That’s why I try to be open too. Fans have said that really helps, knowing that they’re not alone. Everything people stress over isn’t the end of the world. Everything is genuinely going to be alright.