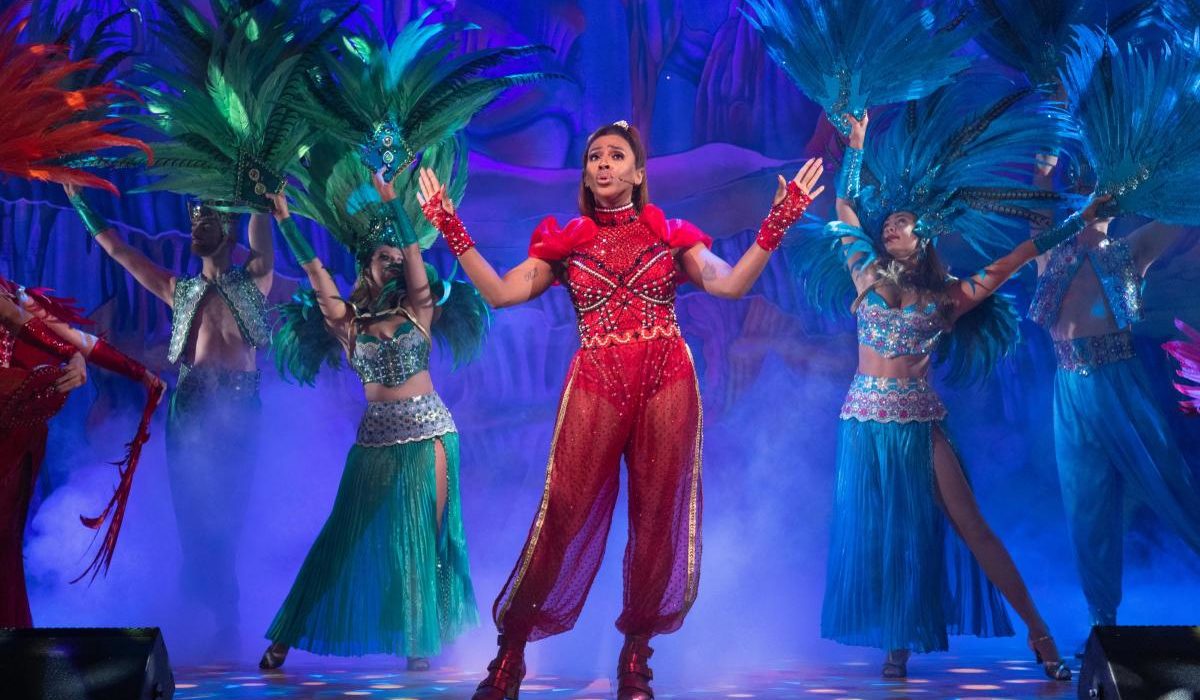 Let me begin this review by admitting that I don’t really like pantomimes. My mother might remind me that I loved them as a child, but that’s precisely why I don’t like them now: I am no longer a child.

Whilst I’m up for immersive theatre, I generally find audience participation awkward. I cringe at the bad acting – even if it’s good bad acting – and the crude British humour. I love the art form that is drag, but pantomime dames don’t always do it for me, and the Buttons-like character is your quintessential White man that is nowhere near as funny as he thinks he is – though maybe that’s the joke.

I saw this panto with three friends – and I was obviously the buzzkill. Ikra hates musicals but loves pantos, which ostensibly makes little sense, but I guess it’s because musicals take themselves seriously whilst pantos take the piss. I sent her to review the Opera House’s last panto, Snow White, with her housemate, Emilee – who also joined us for Aladdin, along with my friend Carly (who is up for anything). I was the big Bad Wolf to their Three Little Pigs, bringing down the mood as I complained about how much I disliked pantos.

So, why did I go to watch (and review) Aladdin if I don’t like pantos? Because Alexandra Burke is in it, of course!

I previously saw Burke in The Bodyguard. She absolutely killed it in the role made famous by the late, great Whitney Houston – and whilst singing Houston classics is risky, Burke totally pulled it off. So, I figured, if anybody could make me enjoy a panto, it’d be her.

I’m also a big fan of Aladdin. It’s the only representation I had as a kid – the only Arab/Muslim character who wasn’t a terrorist. Problematic in other ways, I know, but perhaps bad representation is better than no representation…

For all the problems I have with pantos, I actually really enjoyed Aladdin. As a critic, I try to put myself in the position of the intended audience, to be fair and balanced, for not all shows are made with 22-year-old, middle-class, brown boys in mind! Take Dirty Dancing, the worst show I’ve seen all year: I put myself in the position of a drunken, middle-aged woman who grew up with the movie and swooned over the hot guy with the big butt playing the role made famous by Patrick Swayze. I greatly disliked the show, but for those who like that sort of thing, that is the sort of thing they like…

So, I went into Aladdin as little me – a naive, uncultured lover of pantos – but I quickly realised that me me was actually enjoying the show. It was genuinely funny, with lots of relevant, adult humour to keep the parents dragged along by their children entertained – and those adults like me who went only to see Alexandra Burke.

I loved how Mancunian the panto was. The whole cast, minus Jafar and the Spirit, had heavy Mancunian accents, and the story was relocated from Arabia to Mancunia! The panto did suffer from some orientalism, but it was nothing too egregious – and other than that, the panto was progressive.

The show’s production value – set, costumes, etc. – was fantastic, but the panto’s real strength came from its solid script and its clever cast-members.

A humourless highlight was the introduction of Wishee Washee, played by Manchester pantomime mainstay, Ben Nickless, who joked that he’s Wishee Washee “this year”. Nickless won Best Panto Comic in the country a couple of years ago – which really is no surprise.

His opening song was a rap, in which he lambasted Tory politicians and praised the NHS, to stellar applause from the Manchester audience. I didn’t think I’d like Wishee Washee, but he gave Burke a run for her money as the star of the show.

As we recover from the dark days of the pandemic – and as we look set to enter more dark days – it was refreshing and cathartic to see the panto make light of it. Escapism is great – it’s nice to forget our troubles – but so too is tackling our problems with humour.

It was especially funny when Wishee Washee showed off his ventriloquism. He told his mother that the puppet wanted him to wear a mask, because they were less than two-feet apart. This allowed Nickless to say the puppet’s lines whilst hiding behind a mask, to laughter from the audience.

Ceri Depree, who played Widow Twankey, was a wonderful, quintessential pantomime dame – with more costume changes than seen at a JLo concert.

The title character was played by West End actor Matthew Croke, the second and final actor to play Aladdin in Disney’s Aladdin in the West End. I saw his understudy when I went to see the West End musical, but I later saw him perform at a pop-up, so I know how talented he is. This is not a role that allowed him to showcase his sheer talent, but it was nice to see him do something different – possibly something outside of his comfort zone.

Although he played the main character, he was often overshadowed by the hilarious Nickless and Dupree, neither a stranger to the panto. It’s not that Croke is too talented for panto, per se – for panto requires a different type of talent than musical theatre – but it was clear that his background is not in panto. That’s not a criticism, however: Aladdin being played by a “traditional” actor created a wonderful contrast between him and the more colourful characters.

Princess Jasmine was played by Rumi Sutton, who is from my area and recently starred as an understudy in Heathers in the West End. My friend Carly knew she recognised her, and she’s actually friends with one of our best mates, Sally – who was lucky enough to see her as Heather Duke in the West End.

Jasmine was likeable, and it was great to see her made an active heroine – heck, she’s the one that (spoiler) defeated Jafar – but the writing really let Sutton down. Her character, although the female lead, was quite forgettable – and that’s not just because some of the other characters were more vivacious, for Croke’s Aladdin was grounded yet memorable. Rather, the script just did not allow for Jasmine to be all that interesting.

Jasmine’s mother (the Supreme Leader of Mancunia) was played by Law & Order: UK actor Nicola Sanderson. She, too, was let down by lousy writing – in an otherwise fantastic script. Pantomimes rely on cartoon villains, and that worked well for Ebanazar (John McLarnon), but the pseudo-villainous Supreme Leader was a little boring and lacked real motive. It was nice to see Jasmine have a mad mother instead of a fierce father, for a change – the pantomime successfully modernised the art form.

The X Factor winner Alexandra Burke played Scherezade, the Spirit of the Ring, who appeared every time Aladdin rubbed his ring when in need of help. She was also a narrator at times.

She was also herself at times!

Nickless talked about Burke before he even met her character, and when the two finally met, he shouted out her name like a mad fan, which was very funny. Even better – he joked that the panto should have hired Leona Lewis instead!

During the first act, Burke treated us to a performance of her winning X Factor song, ‘Hallelujah’, to delight from the audience. During the interval, I bumped into my Studio Lambert colleague Jacob, who had been banging on about Burke since it was announced that she’d be starring in the panto. We were both thrilled to have seen Burke perform ‘Hallelujah’ but lamented that it was not ‘Bad Boys’. To our delight, she sang that bop during the second act – and then again during the curtain call. That was the highlight of the show.

Whilst breaking the fourth wall is a convention of panto, the cast messed up several times. Messing up is not necessarily a problem; it’s how you recover from it that counts. Nickless, Dupree and McLarnon all masterfully recovered from their slip-ups and improvised with great skill. This was perhaps most notable during the tongue-twister scene, when the actors messed up their lines – unashamedly.

Then there was the scene where Wishee Washee attempts to make an audience-member his girlfriend. Croke called the woman the wrong name before being corrected by Nickless, who told us that the name which Croke used was the name of the woman from the interval. There wasn’t actually an interval that day so that might have been a fib, but Nickless’ ability to think on his feet and make light of Croke’s mistake was on point. Interestingly, Croke stayed quite serious during this scene; there was a clear contrast between Croke and Nickless’ backgrounds and training: in musical theatre, you correct your mistake; in panto, you roll with it.

One of my favourite moments of the panto was the penultimate scene, a sort of breakaway from the main story. It came in between Jafar’s defeat and the wedding (which was basically the curtain call).

In this scene, Nickless, Dupree, Croke and Sanderson told us what they’d do for a living if they weren’t panto stars. The sketch involves person A telling us what they’d do, before person B tells us what they’d do twice, with person A repeating their line during person B’s second line. The lines are layered on top of each other, causing chaos onstage.

I’d seen a version of this skit when on holiday as a kid, and since then I’ve longed to see something similar. The first version I saw had more actors, but it was less wild and required far less skill and attention from the actors. In this version, there was two sets, so each cast-member told us two things they’d be doing if they weren’t in pantos. This meant the actors kept having to change positions, on top of getting their lines and movements right. Nickless, Dupree, Croke and Sanderson had clearly perfected this scene because a single slip-up could have ruined the whole thing.

I was a little disappointed by the genie, the most popular character in the Disney film. In this panto, the genie was just a giant puppet that appeared twice. Whilst this version of Aladdin differed massively from the Disney version, the genie was clearly modelled on Disney’s Genie, yet the character was sidelined. I’m glad, though, because the character was pretty terrible. In fact, I’m not sure what was worse: the puppet, the bad Mancunian accent, or the cringy jokes.

One last criticism – whilst the show was generally very funny, and Dupree was a real scene-stealer, her parody of Lady Gaga’s ‘Poker Face’ was an unnecessary cringe-fest. It felt like the writers just threw it in to make the panto even more camp, or because somebody loves Gaga (who doesn’t?). I know that pantos throw everything but the kitchen sink – and Widow Twankey owned a dry cleaners so we got the kitchen sink too! – but this scene killed the vibe. I also did not understand the jokes – why was the song renamed ‘Botox Face’?

Her introductory song, a cover of ‘It’s Raining Men’, made little narrative sense, but it was probably an attempt to give her introduction a Priscilla Queen of the Desert feel – and that it did! ‘Poker Face’, on the other hand, was entirely unnecessary.

Perhaps I’ve been too critical. It is just a pantomime, after all, and I shouldn’t compare it to all of the musical theatre that I see. But for all my criticisms, I really enjoyed the show – and I don’t even like pantomimes!

Aladdin runs at the Opera House until the 2nd of January.