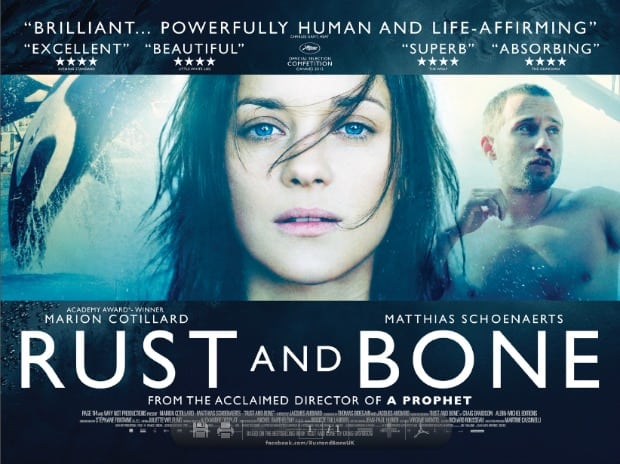 Marion Cotillard is arguably the most successful and versatile actress of the past five years.  Having won an Oscar for her searing, visceral portrayal of Edith Piaf in the French film La Vie En Rose in 2007, she has since then ripped her way through mainstream Hollywood with almost contemptuous ease, from Inception and Contagion to playing Batman’s near nemesis in The Dark Knight Rises. A pleasant surprise then to hear she’s back on home turf with her next film Rust and Bone. After all, French cinema is academy award-winning territory for her.

Rust and Bone explores the bond between single parent/boxer Ali (Matthias Schoenaerts) and Stephanie (Cotillard), a killer whale trainer who suffers from a horrific accident. I know, this looks about as implausible a plot as you’re ever likely to see, but trust me – Cotillard is very definitely in the “she’s never made a bad film” category, and Rust and Bone will be no exception.  Having wowed audiences and critics alike at Cannes Film Festival back in May, this month saw Rust and Bone arrive in London, where it was met with the same positive response at the BFI London film festival.

Don’t be put off either by the “love story with a difference” tag.  This one has genuine pedigree.  With Cotillard and Schoenaerts acting their socks off, the film is also written and directed by French director Jacque Audiard, who already has two Bafta-winning films under his belt: A Prophet (2009) and The Beat that My Heart Skipped (2005). As well as this, be sure to listen out for another score by BAFTA-winning and Oscar-nominated French film composer Alexandre Desplat (the maestro behind the music for such films as The King’s Speech and Girl with a Pearl Earring, to name but two). In short, this film brings together French film royalty with predictably regal results.

Like the headline to an article, a trailer can make or break expectations for a movie. The trailer for Rust and Bone will blow you away and the film is going to do the same. Looks like it’s going to be another French invasion at the Oscars this year, and good on them!

Rust and Bone is set for release here in the UK on November 2nd.