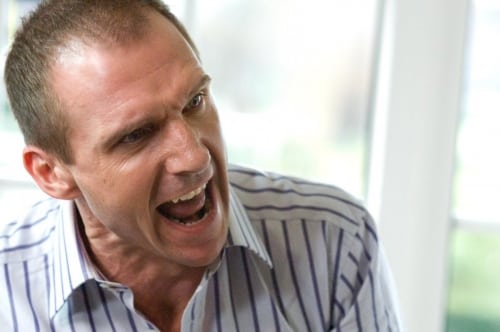 5. Happy Gilmore – Golfing newcomer Gilmore (Adam Sandler) is confronted by contemptuous pro, Shooter, before the beginning of their tournament.

Shooter: I eat pieces of sh*t like you for breakfast

Gilmore: You eat pieces of sh*t for breakfast?

3. In The Loop – Spin doctor Malcolm Tucker berates government employee Judy Molloy in one of his classic fits of rage.

Malcolm: Allow me to pop a jaunty little bonnet on your purview and ram it up your sh*tter with a lubricated horse c*ck

2. Casablanca ­– Rick Blaine (Humphrey Bogart) American businessman in Nazi occupied Morocco responds to a petty crook who turns up at his bar.

Crook: You despise me don’t you?

Blaine: Well, if I gave you any thought I probably would.

1. In Bruges – Crime-boss Harry (Ralph Fiennes) finds out his top hitman has defected and proceeds to violently batter his phone in a fit of rage. His wife enters.