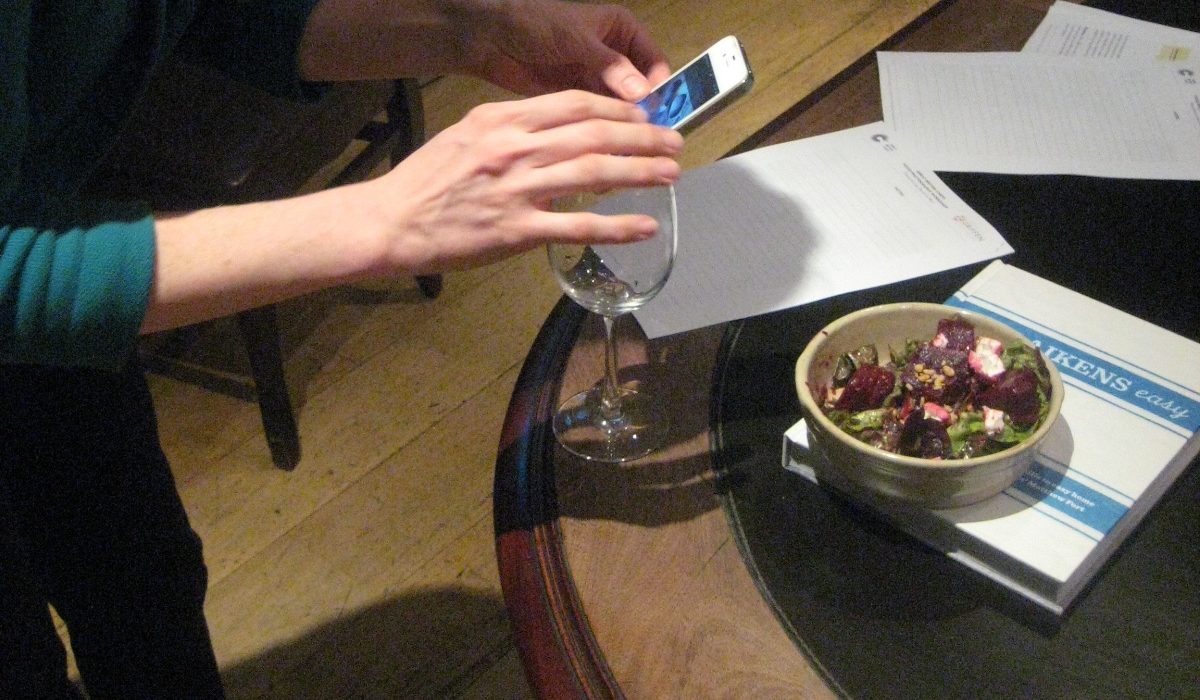 Amateur food photography has hit the headlines lately with the news that it has been banned in various establishments across New York City. Many restaurants have prohibited flash photography, whereas others have gone the whole hog and barred all types of camerawork. The basis behind this is that it can be off-putting to other diners, as well as to the chef, and that it can also be offensive to those that have served you as you sit and click away rather than gratefully tuck in. However, I think there’s more to it.

You must also enter into the mind-set that when it does look good, this does not render you immediately or necessarily talented. I think there is a lot of art to be found in food – through its colours and patterns or the connotations of deliciousness and indulgence – but it does not make you an artist.

Nothing more artistic than a close-up of an orange on a decorative mini plate. Photo: NKMphotos (scrapgeek) @Flickr

If your food photographs mark a celebration, then maybe you can be forgiven. Photos are taken with the very intention of capturing memories and sentimental moments, so if you post a picture of your Grandma’s 90th birthday cake, it should be given some respect. Food is a big part of many people’s lives and is often used as a means to come together, and is thus something that should only really be promoted.

Furthermore, you might be able to get away with it if it’s informative. No one wants to see a pile of unknown slush on a plate because it is irrelevant to everyone else and generally pretty disgusting to look at, but if you were to say that the pictured slush was the best scrambled eggs you’ve ever eaten and proceed to explain how it was made, then people might stop and think twice.

You can’t beat a bowl of slush complete with a suspect clove of floating garlic, especially when it comes with a fancy black border. Photo: Lablascovegmenu @Flickr

You’d be forgiven for thinking this was lemon on toast, but apparently underneath that ridiculously dull and dreary filter is a slab of salmon. Photo: tess_marie @Flickr

Nobody will ever really understand the concept of photographing and ‘Instagramming’ food, even though it’s something so many of us do on a regular basis. In the past, I have personally felt that I can get away with it because I’m a self-confessed foodie, but perhaps that was just an excuse. However, the phenomenon perhaps deserves some degree of defence, as long as it is done well. It sometimes works to the advantage of restaurants, as it can act as free advertising – but take a bad picture and it will have the adverse effect.

What you must remember is that you can’t polish a turd, and you also can’t use a pretty filter to make your food look appetising. Maybe just think twice about subjecting your fish pie to that unnecessary ‘70s filter, and please, please don’t ever degrade your food with a black and white effect.

…And one last parting image, just to really hit the message home: