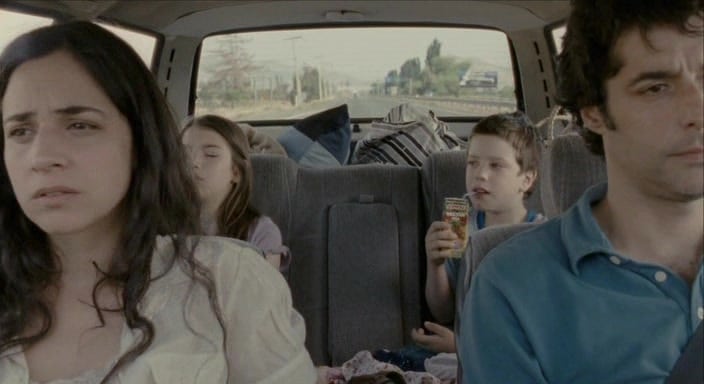 Dominga Sotomayor Castillo makes a directorial debut in this Chilean production, which translates into From Thursday to Sunday, one of the many films in this year’s iViva! Festival line-up.

The film follows a family on their road trip across Chile’s landscape, centering around the adolescent protagonist Lucia. The journey allows her, and the audience, a peek into the cracks of her parents’ marriage that become more visible as this outing progresses. It becomes apparent that this may be the family’s last adventure together as a unit when it is hinted that the couple have decided to go their separate ways, a detail that is initially lost on the little girl. The situation is not helped by the wife’s irritation at the husband picking up a pair of hitchhikers and the husband’s contempt towards an old acquaintance of his wife who seems slightly too close for comfort. Gradually, a playful and innocent Lucia diminishes into a wistful girl, as she uncovers more of the doomed adult world.

The film’s charm resides in the subtle string of moments depicting the realities of a road trip that we have all experienced at some point. Slumping around in the back seat, playing games, pit stops and seedy motels are all pleasantly reminiscent and familiar. A languid pace accompanies this fruitless trip, and unless you are a patient viewer, you may not necessarily appreciate the lengthy and lethargic shots. Unfortunately, another drawback of the film is its lack of plot. The venture is solely driven by the characters and their emotions. Though it seems Sotomayor is making an earnest attempt at juxtaposing a child’s blissful ignorance to an adult’s despondent awareness of life, the film is rendered dull in anticipation of some drastic turn of events. Alas, it’s not a lull before the storm, it remains a lull throughout.

Credit must be given where it’s due, and it’s the unique disposition of Lucia decoding her parents marital dispute conveyed through bitter glances and muted arguments. It becomes one of the film’s engaging elements. Another asset are the endearing performances, especially by the lead, a promising and talented Santi Ahumada. The radiant cinematography by Alvarez is a delight. Fortunately, the film does offer a blithe and mostly spontaneous soundtrack consisting of the car radio and sing-a-longs of Spanish classics by the cast that momentarily lift the plunging mood.