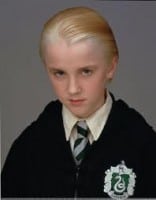 She takes the phrase ‘bitches be crazy’ to a whole new level. In probably the most effective anti-adultery campaign ever launched, Glenn Close plays an obsessive, determined mistress, who’ll stop at no lengths to get her man. Under different circumstances, this might have made a good romantic comedy. Perhaps without the bunny boiling.

Gold digger, murderer; call her what you want. She is pure, meaningless evil in the form of Joan Cusack. If you haven’t seen this film in a long time re-watch it and you’ll be amazed at how funny it is.

Of all movie serial killers you could be imprisoned by, he might just be the worst. You can’t be a serial killer without a sufficient level of creepiness, and this guys got it in abundance.

Not in any way inherently evil. He shouldn’t even be on this list, but it would not be complete without him. Magic or not, Draco is your stereotypical high school bully who dabbles in the dark arts. Who doesn’t love a good bully? He’s the magic version of Karate Kids blonde villain Johnny Lawrence; a true case for nature vs. nurture.

I was one of the few unimpressed by Javier Bardem’s caricaturish portrayal of a Bond villain. He seemed as though all he needed was a little persuasion and he would have abandoned his evil plan. His blonde wig was the most villainous thing about him.