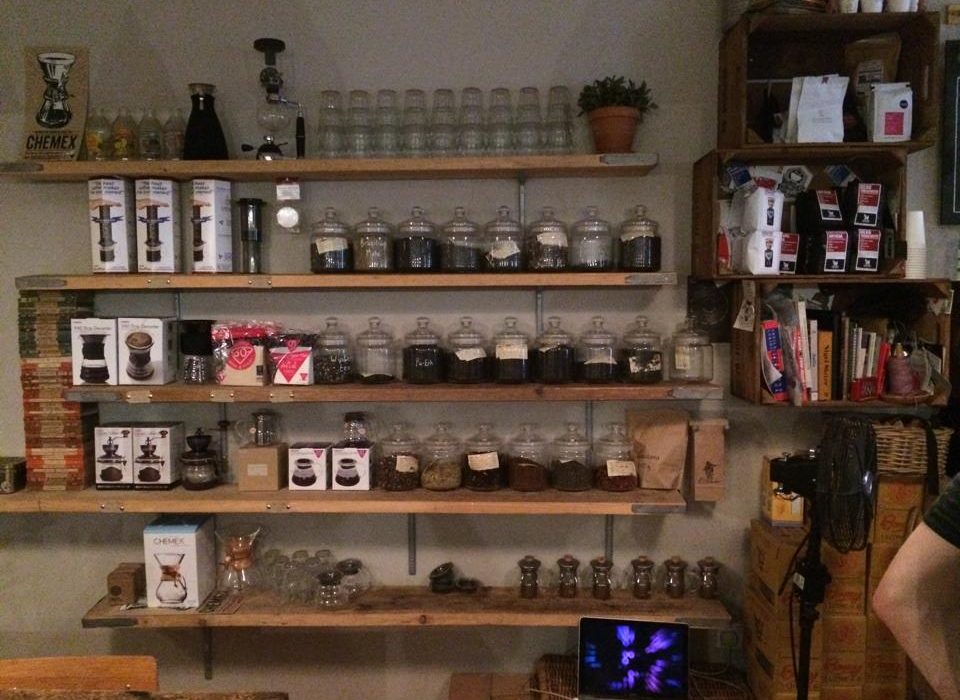 Having spent Saturday morning wandering aimlessly around town, accomplishing only a haircut, we traipsed into North Tea Power feeling very sorry for ourselves: hungry, thirsty and undeservedly fatigued. The café, conveniently nestled between ‘WOOD. Wine & Deli’ and ‘Simple’, offers something a little more casual and speedy than its neighbours. It isn’t the most obvious of places; a monochrome hanging sign ushers you up a few stairs onto a kind of raised deck where you see the shop front along with covered outdoor seating. I’m sure this is an excellent option in Manchester’s warm season, but as we had missed that miniscule window we opted for an indoor experience.

The interior of North Tea Power is unobtrusive and inviting. Upon entering, you are met by a vast glass cabinet containing sandwiches, cakes and other fresh produce. Behind this, the extensive tea and coffee menus plaster the wall, confirmed by shelves crammed with jars of loose teas, coffee compressors and books. Pared down furniture features all round. We spotted an empty table in a lamp-lit corner and made a beeline for it.

After nursing our feet for a few minutes, we headed up to the counter to check out the menu. I was impressed by the array of teas on offer, although logically it shouldn’t have come as a surprise considering the name of the place. I figured that they must be doing something right tea-wise to declare their prowess in this way, so out of curiosity I opted for a ‘Popcorn’ tea—a green tea mixed with toasted brown rice—which I was assured lived up to its name (again). My companion was a little less adventurous and went for an Americano, although upon further research I gather that North Tea Power is highly esteemed for its coffee as well. Both were up to scratch; mine was warm and energising with a nutty punch which reminded me of the cinema and the coffee was rich and velvety.

While at the counter we had ordered our food. I chose the frittata; freshly made daily and piled up high in thickly sliced wedges, it came warmed and served with generous helpings of both potato and bean salads. The frittata itself was well seasoned, with tender chunks of courgette, pepper and onion throughout. The beans were well dressed. But the real winner was the potato salad. Mayonnaise was unconventionally absent, instead replaced by a sweet and sharp citrusy vinaigrette which was nothing short of delightful. My companion ordered French toast; jammed with ham and Emmental cheese, and steeped in honey with a sprinkling of walnuts, it looked indulgent and potentially challenging. The first few bites were enjoyed, but the stodgy texture and overriding sweetness made the meal difficult to finish. No hard feelings to you guys at North Tea Power though; the customer in question is a bit of an idiot, ordering something covered in sugar whilst not having much of a sweet tooth.

Amongst the thriving network of bars, restaurants and tearooms which make up the Northern Quarter, North Tea Power makes a nice addition for those with a hankering for a good hot drink and something nice to nibble. Thirsts quenched and stomachs silenced, we watched the world go by before finally mustering the courage to get up and toddle home.