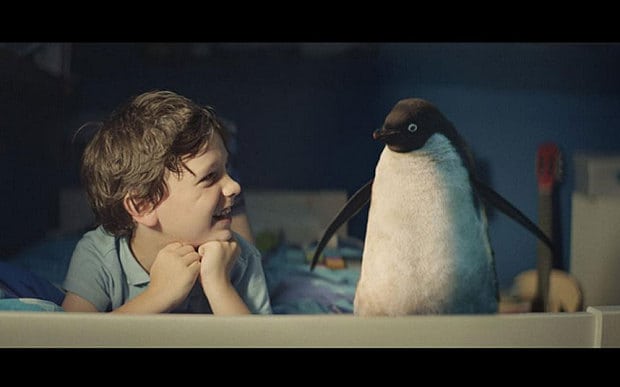 From Real Love to Real Change: Are John Lewis Ads Now Too Predictable?

They used to say that the countdown to Christmas could only begin once ‘that’ Coca-Cola advert started to appear on our screens. Within the last few years, however, we only seem to start to get into the festive spirit after we burst into tears at the John Lewis ads. This year’s offering of a story about a boy and his penguin companion has really taken off, which makes Monty the first penguin in the world able to do so. It’s made such an impact, especially in our house, that we decided to have penguin this year instead of turkey.

What I find most engaging about the ad is not the rather humorous realisation that a penguin gets a mail-order bride for Christmas, but Tom Odell’s beautiful cover of John Lennon’s Real Love that accompanies it. The John Lewis ad has become well known for featuring covers of well-known tracks. Ellie Goulding’s cover of Elton John’s Your Song was used in 2010, and Lilly Allen’s cover of Keane’s Somewhere Only We Know reached number one in the UK Singles Chart last year.  A similar situation could arise this time around, as Real Love is slowly creeping its way up the charts, and we haven’t even reached the end of November.

Thus far, we seem to have mixed views on Odell’s cover being selected to feature in the ad, with the ones who praise it as a triumph reaching to the conclusion that John Lewis have ‘nailed it’ once again, with the ones who aren’t so impressed feeling that his version is ‘so wet you could row a boat in it’. Odell’s treatment of the song is sympathetic and sincere, however I can’t help but feel that John Lewis has missed a trick. They run the risk of stagnating into the same old musical routine. We now expect John Lewis ads to have haunting, goosebump-raising vocals over lingering piano lines, is it possible to have too much of a good thing? We get the same, overly sentimental result every year, and it’s starting to become quite O-dull (sorry).

What strikes a chord, pardon the expression, with the John Lewis ads is the relationship of the music with what you can see on the screen. In a world in which we are dominated by marketing and advertising, the need for the right music to match the right brand is paramount. John Lewis ads with AC/DC or Led Zeppelin as a backdrop is about as likely as Chris Rea actually managing to get home for Christmas, or penguin testicles being a part of the Bushtucker Trials on I’m A Celebrity.  John Lewis would be wise to change things around musically, not thematically, in order to avoid complacency. For Tom Odell, only time will tell as to whether singing for an advert is a successful career move, but for the next six weeks, or at least until the dust/snow has settled, Real Love will be at the forefront of our Christmas repertoire.