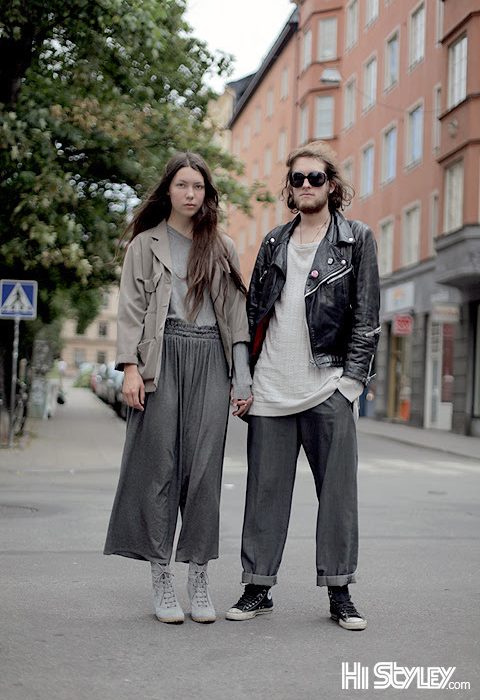 Scandinavian style is most famously synonymous with IKEA and H&M. These household brand giants have caused international tidal waves by offering affordable bites of Swedish style to replace everything from your sofa to your socks; IKEA has become the new buzz term for modern when talking lampshades.
Sweeping Instagram and the blogosphere with similar velocity is ‘Scandi’ style. So what characterises ‘Scandi’ style and where exactly is this trend surge originating from? The look is relatively simple and a basic palette consists of:

1. Monochrome; heavy on the black with the odd splatter of nudes and navy
2. Blurring of gendered shapes; Scandi favours boxy tailoring and unisex options
3. Simplicity over showy; avoiding loud patterns, explicit jewellery, or fussy hemlines
4. Flat footwear, with Nikes having a popular following in Copenhagen
5. Low-key hair and makeup, with straighteners and fake tan firmly unfriended

A portion of this recognisable look comes from the influence of Acne Studios, a premium design house based in Stockholm which enjoys producing frustratingly covetable but bankrupting coats. However there is more to Scandinavian style than an Instagram fad. Fashion in Copenhagen and Stockholm is far more diverse and adventurous than this standardised look. Members of the Uni’s Nordic society suggest the cities in Scandinavia are the originators of the most condensed frissons of international style influence. There exists a hotbed of young designers, with Swedish brands most prominent in showcasing crazy amounts of talent; see brands such as L’Homme Rouge, Cheap Monday and Filippa K for clues.

A new Instagram term approaches for what was arguably the once ‘Scandi’ look, and that is ‘normcore’. A mix of ‘hardcore’ and ‘normal’, it is a trend for average-looking clothing and had a heavy presence on New York SS15 catwalks. A mutant of ‘Scandi’ cool, the look is defined as ‘stylized blandness’. ‘Normcore’ does not mean adopting unfashionable clothes, or randomising choice by letting your dog choose from your wardrobe, instead it is choosing clothes which are in no way distinguishable, not even distinguishable by oddity. Average is now ironically a fashionable statement of anti-fashion.

Scandinavia continues to be the root from which the most innovative, edgy fashion talk originates, and credit must be paid to the large density of talented designers and bloggers, quietly producing some of the most widespread, talked about fashion in the world.