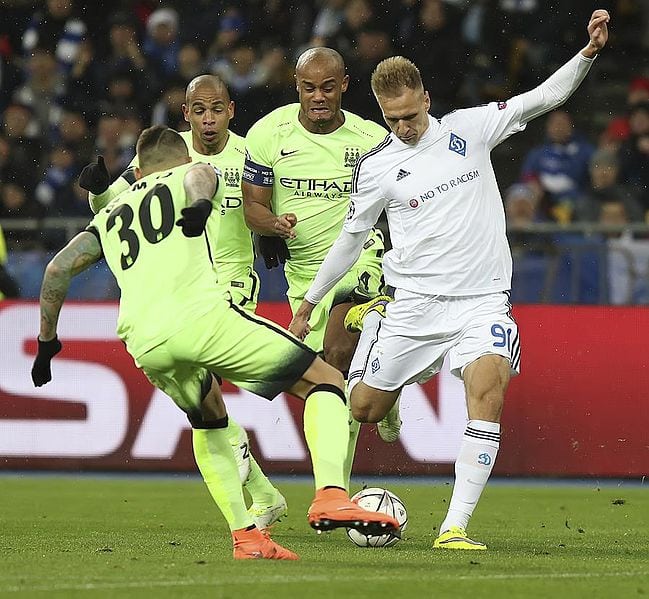 It may be the second consecutive goalless draw for Manchester City, but this one ended on a much higher note than their outing at Norwich at the weekend—City made history tonight. The Blues finished the game as 3-1 winners on aggregate and entered the quarter finals of the UEFA Champions League for the first time in their history. Although the game was not the greatest advert for the Champions League itself, the result will mean a lot to the City faithful.

The fall of the Berlin Wall, the Holy Roman Empire and VE Day have absolutely nothing on the history made by Manchester City today (okay, maybe I’m exaggerating). In recent years City have only made the round of sixteen twice, when they were dumped out of the competition by Barcelona. This year, however, there was a change of scenery for the Blues, as they finally got a more favourable draw. Dynamo Kiev were dispatched over two legs by City, resulting in this historic achievement. Fingers crossed now that Arsenal can beat Barcelona…

5th minute: INJURY. Vincent Kompany went to ground after pulling his calf again. Subbed off for Eliaquim Mangala, to a rapturous standing ovation. I have not seen a man look as gutted as Kompany since my Dad showed me his wedding picture.

22nd minute: INJURY. Nicolás Otamendi was the next to go, as the Argentinian made way for Martín Demichelis.

60th minute: POST. Yaya Touré played the ball out wide to Jesús Navas who struck it hard and low, but the ball clashed the far post.

86: PENALTY APPEAL. City got away with murder here, as a double penalty appeal was waved away. Fernando clumsily brought down a player in the box, which went unnoticed, and the resulting shot hits him on the arm. Kiev will have felt hard done by.

This was City’s first clean sheet in ten games in the Champions League. Onwards and upwards!

“When you have a new achievement, it is always important for your trust. I think that this season we are—I don’t know if the word is better prepared—but more experienced.” 

—Manuel Pellegrini on City making history, and whether they can go further.

Since his transfer in 2008, Vincent Kompany has gone from a cheap midfielder, to one of the best centre backs in European football, whilst most City fans consider him as one of the greatest players to have played for the team. It is because of this that it is so unfortunate that he has suffered so much with injuries in his time at City!

Kompany won City’s Player of the Month award for February, as he impressed since his return from a calf injury—but the problem has recurred again, as Kompany hobbled off after five minutes of the match. He will be gutted, but his pre-match captain’s notes in the match-day programme highlighted his personal battle with injuries, as he said that he will continue to fight.

When it rains—it pours. Kompany’s recent successful performances have come partly due to a great understanding between him and Otamendi, as both play better alongside one another. So, when Otamendi hobbled off with a muscle injury as well, City fans will have been doubly concerned, as it’s possible that there will only two fit centre-backs for the Manchester derby next Sunday.

Pellegrini said that Kompany will be out for a month at least, and that it is difficult to know if he will be out for the entirety of the rest of the season, however he noted that its possible Otamendi may be fit quicker and they will find out soon. Demichelis and Mangala are the only two official options for the team, however Bacary Sagna can also play centre-back and Mancunian Tosin Adarabioy would relish the chance to play against the city rivals.

Friday sees the all-important Champions League draw for the last eight. You’d like to think that City would be very happy with pulling out Wolfsburg or Benfica in the draw as these seem the easiest bets; however Manuel Pellegrini noted that “I think that when you are in this stage, any team is difficult.” He went on to say that all the teams at this stage are the same… except Barcelona, who he thinks is the best.

I’m sure Pep Guardiola will not be happy about that one.

After City’s second choice goalkeeper saved three penalties at Wembley last month to help the Blues lift the Capital One Cup trophy, the City fans have labelled Willy Caballero as a legend at the club! This will surely be enjoyed by Joe Hart, who has always had a great relationship with any back-up at the club before—but maybe he didn’t like one of the chants thrown his way this game.

Touré was back to his old self in this match, and showed what City missed from him in the weekend draw with Norwich. The Ivorian had a fantastic first half especially, as he made two surging runs throwing players to the ground in his wake. He always seems to look like he’s running much slower than the players trying to get the ball from him, and yet he manages to keep the ball and power through with ease. His quick feet are especially surprising for such a tall man.

Another man worthy of a mention is Sergio Agüero. The striker may not have scored, or even fashioned as many chances as he usually does, but his hold-up play was great and the skill he possessed a few times to get past the Kiev defence was mesmerising. A cheeky back-heel and spin saw off two defenders during the second half, and had City fans on their feet.