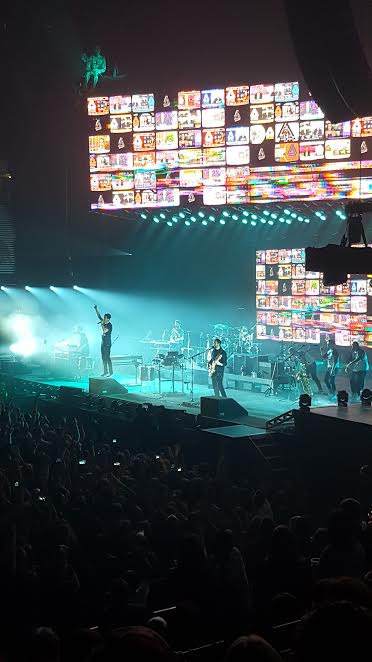 If I am being totally honest, when I first heard that Bastille were playing Manchester Arena I was a little sceptical. I had seen them perform at Reading Festival the year before and had been disappointed, it had lacked that electricity that ignites a crowd into being part of it. I enjoyed it, but I just did not really feel it.

Any doubts I had, however, dissolved the minute the foursome filled the arena with the invigoratingly joyful ‘Send Them Off!’ No time was wasted in pulling the seated to their feet and the standing into the air as the crowd and band threw themselves into the show.

Vocalist, Dan Smith, successfully captured every member of the audience no matter how far back from the main stage they were. During hit track ‘Flaws’ he walked straight through the entire standing crowd, and though this, unsurprisingly, impacted on his vocals the impact on the room was incredible.

One of the most unique parts of the show was the dystopia-inspired concept running behind it. A politician introduced the bands on screen, opening and closing the show and TV screens throughout showed ‘broadcasts’ from WWCOMMS, a corporation invented by the band and runs behind the theme of the entire Wild World album. It was intelligent, both captivating and unsettling and ultimately set to raise the standards of arena shows.

Bastille have risen to heights that so few bands do, and yet their performance at Manchester Arena made it undeniably evident that they are exactly where they deserve to be. None of this felt even remotely lost on the band either; I lost count of the number of times Dan exclaimed “Thank you so much!” throughout the set and joy seemed to emanate through every track.

They delivered tracks spanning across their career, from the recent ‘Good Greif’ to the defining and ever brilliant ‘Pompeii’. However, some of the greatest moments came from their lesser-known tracks such as the powerful ‘The Draw’ and ‘Glory’, the track Dan named as being the explanation behind the album concept.

It was a thoroughly enjoyable and truly exciting show that determined Bastille as a band set to define the standards of live performances from now on.