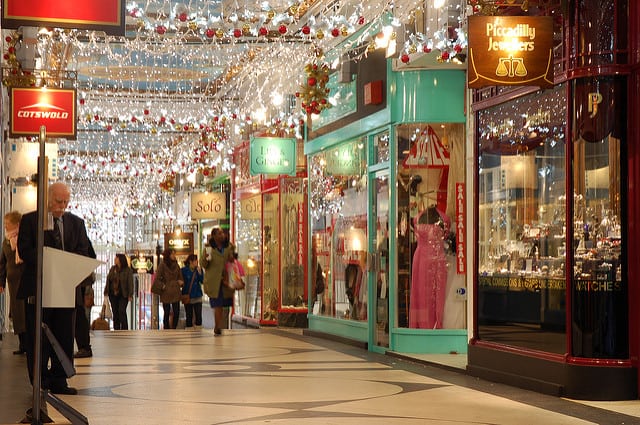 Retail staff, no need to be frosty!

Tap ‘working retail Christmas’ into any search engine and you’ll be hit by an avalanche of pessimism, from ‘the struggles of working in retail over Christmas’, to extreme statements such as ‘retail ruins Christmas’. Having worked in retail for three and a half years, I feel I’d be in a good position to write a novel on the bleak aspects of the job. I’m also guilty of being a glass-half-empty kind of person, even extending to the glass of Bucks Fizz on Christmas Day. I’ve counted each hour between clocking out on Christmas Eve and clocking in on Boxing Day, before realising that it wasn’t actually the job that was putting a damper on Christmas — it was my mind-set.

It seems that a preconceived disapproval is developing between retail workers and customers, to the point that workers now expect every customer to be rude, and customers anticipate unsatisfactory service. This is damaging to both staff and shoppers, and it’s time to snap out of the negative cycle in order to make the festive period a more pleasant experience for everybody concerned. Let’s focus on some of the positive aspects that can be drawn from working in retail over Christmas…

Working in retail means that we generally get the first peek of incoming Christmas products and a head start on festive fashion. I don’t know about anybody else, but there’s something about rearranging the gift sets and laying out fluffy pyjamas that makes me feel like I’m part of a Christmas film. As much as we all claim to hate the loop of Christmas music that repeats itself indefinitely, it is nice to be able, if not encouraged, to feel festive whilst at work. There aren’t many jobs where you can plan your New Year’s Eve outfit whilst fulfilling your role, whether you’re taking inspiration in the fitting rooms or tidying up the shop floor.

Speaking of planning outfits, you’ll definitely need a good one for that staff Christmas party. Due to the number of staff employed by large companies, we are guaranteed a great night out for the staff Christmas do, something that can’t always be promised in other jobs. Most companies also offer great staff discount on their clothing and products, allowing us to justify that new pair of shoes.

The Boxing Day sales may mean an early start and a day of arguing about the fact that you do not decide the price tags, but they do provide us with some stories to tell. Anybody would be lying by claiming there’s nothing amusing about watching customers argue over that bargain of a coat that you know has been lurking in the warehouse since summer 2011.

There’s also a chance to improve your CV by taking on retail work over Christmas. It takes resilience, confidence, organisation, and excellent interpersonal skills to work in such a fast-paced environment at their most crucial time of the year, which allows you to gain those often-mentioned transferrable skills. This experience will be invaluable for future applications and interviews.

I can fully appreciate how tiring it is to work in retail over Christmas, but the long shifts and difficult situations can be made a little easier by carrying a positive outlook. Also, when the snow starts to melt and the sales come to an end, you can breathe a sigh of relief and await an excellent pay slip to reflect all of your hard work and extra hours. Suddenly, it all seems worthwhile.