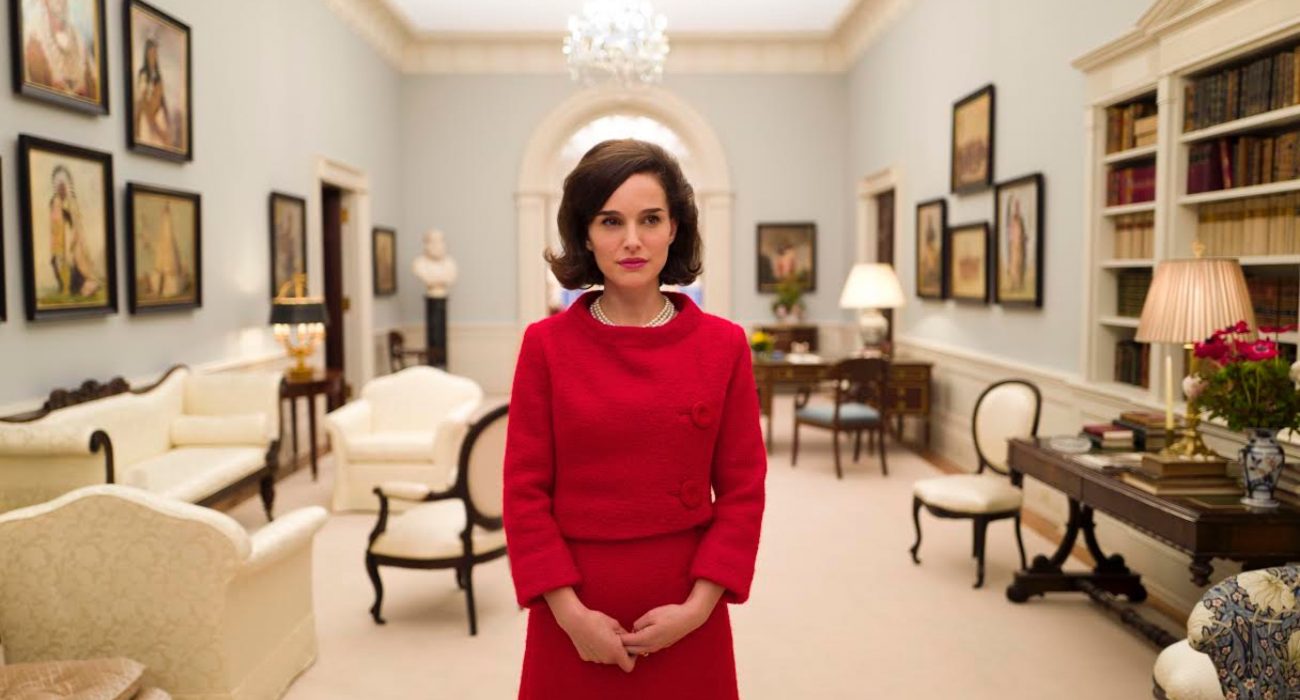 Jackie takes place in the weeks immediately following the assassination of John F. Kennedy and almost claustrophobically centres on his widow Jackie’s attempts to make sense of the tragedy that has happened and do right by her late husband. Indeed, the camera rarely leaves Portman’s fraught visage, and lets us know from the offset that this is a film both about and inhabited by the figure of Jackie Kennedy, rarely deviating from this intense focus.

The film is framed through an interview given by Jackie to a journalist eager to get his hands on the exclusive story from the former First Lady. However, Jackie is too smart for him and is keenly aware of the kind of story he wants to spin. From the off she lets him know that this will be her story and her history, and the journalist’s published article will be almost entirely the one she herself has crafted. It is a remarkable power dynamic which gives Jackie almost complete control over the narrative of the film.

What then entails is a series of flashbacks/flashpoints in which Jackie Kennedy goes about creating the myth of her husband how she sees fit, envisaging his legacy as one reminiscent of Arthurian legend. Recreated archive footage shows Jackie giving the first ever televised tour round the white house, and these moments reveal her singular, almost materialistic intent to cement her husband’s place in the pantheon of great presidents. Jackie wants the late president to be remembered in the same breath as previous titans such as Abraham Lincoln, and her uncompromising desire to memorialise her husband underpins the films best scenes; this is a woman who has just lost everything yet will bow to no one.

Portman’s Jackie is also a woman of remarkable vigour and compassion, refusing to bow to pressures, to shy away from the public eye as well as consoling her children in the way only a mother could. In one potent scene, she refuses advice to change out of her blood-spattered clothes, wishing to make her husband’s enemies realise the gravity of their crime, stepping off the plane into the public eye bearing the grim reminder of the tragedy that had occurred just hours before. This same motif of blood is then used in a later, crushingly vulnerable scene and demonstrates the films fine balance between the grief and resilience of its titular character.

However, despite the brilliance of Portman and wonderful writing from Noah Oppenheim (as well as an unnervingly sparse score from young composer Mica Levi) the middle section of the film does drag.

After the initial displays of intense, feverish grief contrasted with Jackie’s iron will and uncompromising attitude to those who would meddle in the affairs of her late husband, the film lulls, not finding enough to flesh out the intervening period between JFK’s death and the imminent funeral. Perhaps it shows a lack of empathy on my part in not being able to sustain my sorrow for this woman’s plight, but after constant scenes of chain-smoking and sorrowful conversations I noticed my sudden desire for her story to be resolved; I wanted her to just get what she wanted and be left alone to attempt to gain some modicum of normalcy back in her life.

However, the final act of the film was a glorious return to form, and showed Jackie at her most compassionate and acerbic. The funeral arrangements become her own personal crusade, and woe betide any who wish to dissolve her ‘Camelot’ myth. Her desire to do right by her husband (who she admits was not perfect) cannot be understated, and it is this singularity which drives the film and kept me in awe of this woman, an individual who I will freely admit I knew nothing about coming into the film.

Overall, the film delivers an Oscar-worthy (Oscar-bait? Cynical perhaps) performance from Portman, who imbues the character of Jackie Kennedy with enough nuance to carry the film forward and keep the audience enraptured by her. Credit should also go to Stéphane Fontaine’s camerawork, which if not focused on Jackie Kennedy’s face from the beginning of a scene will cleverly snake its way across the room and once again plant her at the centre of the chaos that surrounds the assassination. Although the pacing does suffer mid-way through the film, for anyone wanting to see a film about a neglected figure in American history, Jackie will leave you with an admiration for a woman you may well have known nothing about.