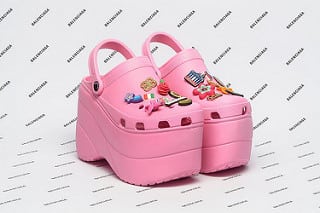 It appears that Balenciaga’s desires to create the ultimate ‘ugly’ shoe were not fulfilled by the most recent unveiling of the ‘Triple S’ sneaker, and as a result, renegade creative director Demna Gvasalia has since delved further into the mass of forgotten fashion horrors to revive footwear’s equivalent of marmite: the Croc.

For his Spring/Summer 2018 collection, the Vetements creative sent 10cm platform reconfigurations of the rubber clogs in hot pink and canary yellow, paired with Balenciaga branded Jibbitz in various designs and vibrant colours including European flags, butterflies, and rubber copies of the house’s own logo.

Following a collection Gvasalia admitted he envisioned to be ‘More Demna, less Cristóbal this time’ (Cristóbal Balenciaga being the original founder of the Spanish fashion house). It is apparent that this Balenciaga collection is one that lays much closer to the practices and designs which skyrocketed his own brand Vetements to global popularity, through use of mutilations of archetypal garments and tongue and cheek humour by use of nomcore objects. Yet this season doesn’t only share aesthetical similarities between the two brands, but rather Gvasalia’s use of ‘click bait’ or ‘meme bait’ is prevalent in this Balenciaga collection more than ever.

This isn’t the first time that Crocs have been paraded down the runway to create intentional outrage and ridicule. Christopher Kane collaborated with Crocs for two seasons in 2016. Both owned by the luxury Kering group, one may say that rather than sharing a love for the rubber clog, both houses’ collaborations encapsulate the current shift in fashion where social engagement and shares arguably take precedence to actual design.

Being dubbed ‘a blatant play for social reactions’ by HighSnobiety’s Alex Rakestraw, it is easy to see why this brash ‘ironic’ Croc move by Balenciaga has caused mass frustration throughout the fashion world. The need to create a social stir is for many, turning the design process on its head, trivializing it by making a final product ‘reverse engineered’ from its desired social media reaction and therefore making it ultimately meaningless.

In a fashion age driven by Instagram, ostentatious style drives the need to document it rather than a need to wear it. After uploading an Instagram of a hyped product, there lies its end purpose. There is no after thought to the legacy of such designs. Thus for many, the Balenciaga Croc marks a nail in the coffin for this stagnant street wear aesthetic, and sees a classic house morphing further into a sister of Vetements that subjugate actual products to the mass social hysteria which surrounds it.

On the other hand, Gvasalia is a genius who is challenging what consumers understand as ‘luxury’ in such a capricious industry. But the only thing that can be objectively said about the Balenciaga Croc and Gvasalia’s reimagination of the Balenciaga house is that the conversation fails to die, and by doing so, adds to the mysterious allure that has seen him become a central force in fashion within the last 3 years. Whatever your opinion, it is clear that Gvasalia’s ‘meme bait’ is here to stay.