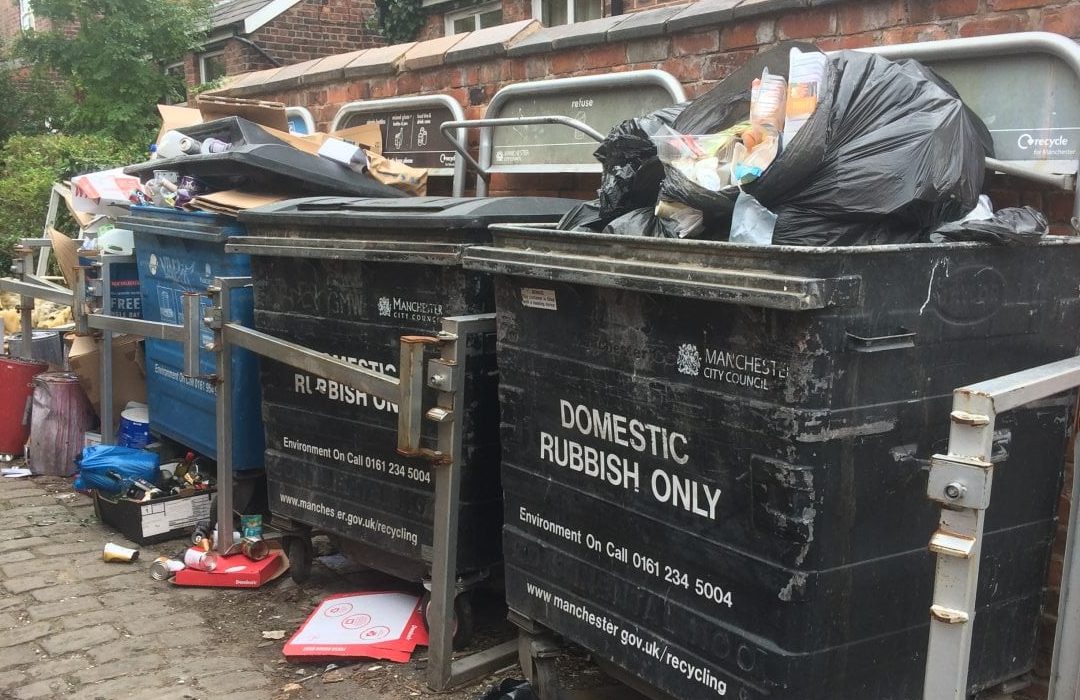 Pulling up outside our second year house for the first time, it was hard not to notice the skip just along from the front door, heaped full of rubbish bags, and surrounded by an overflow of cardboard and takeaway containers. As representations of the student waste issue go, it’s a pretty appropriate one. Recent studies have shown that those between the ages of 18-24 have a tendency to waste more than any other age groups, and this throwaway attitude can be seen in the streets of Fallowfield.

Earlier this year, Manchester hit the news following resident’s complaints of rubbish left in the streets after students moved out. Manchester Evening News even nicknamed the crisis in Fallowfield ‘binmageddon’ as streets became filled with rotting food and unwanted electrical items. Many blamed the landlords, labelling them as “irresponsible” for not providing enough information on waste collection in the area. Some residents noted that instead of charging students with a cleanup bill, they were simply moving the rubbish from inside properties on to the streets. But is it fair to lay all the blame on landlords, when it is our mess in the first place?

The mountain of waste produced by young adults is clearly not just an issue when it comes to moving out. Walk along most streets in Fallowfield and you will be sure to spot signs of student life thrown out onto the pavement — cans, cardboard chicken boxes, and laughing gas canisters are all good examples.

There is clearly a problem, and as the skip in the street illustrates, it is not just how much we are throwing away, but also how we are throwing it away. The focus is on getting rid of rubbish as quickly, and with as minimal effort as possible. It’s easy to assume that someone else will sort out what is fast becoming a key issue, but it is time to take responsibility ourselves.

In University halls, the presence of huge, clearly labelled bins makes recycling a lot easier. Once out of the gates of Owens Park, however, it is less clear what can be recycled, which bin it goes into, or even if there is a bin at all. The University and the SU provide information regarding recycling and waste on their websites but this is about rethinking our attitude to waste and our throwaway culture.

Looking back over the heat wave of the summer, it is easy to disconnect the memories of time spent in the sun in Platt Fields Park with the mountains of rubbish that were left lying around after everyone had gone home. The question is, how do we get people to accept responsibility for their own waste and clean up after themselves? 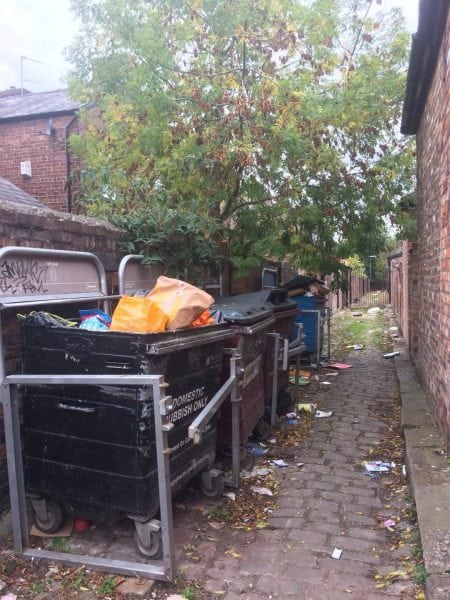 Food waste is one of the biggest issues among students, but it is also one of the easiest to reduce. So much of what we buy ultimately gets thrown in the bin. It doesn’t make sense to spend your student loan on food that doesn’t even get eaten, so it is about taking a more active interest in what we are buying, cooking, and wasting.

The Guardian reported that the average UK household wastes £470 worth of food a year — and it’s not just at home that food gets thrown out. ‘Humanity Giving Back’ is a scheme started in the university that attempts to reduce the amount of food going to waste by redistributing packaged food to those in need. This shows just how much of what we get rid of is still edible.

In response to how they attempt to reduce food waste, some students said that they use their senses to judge when food is still safe to eat, rather than always relying on the best before dates. Others recommended shopping for one or two days at a time rather than for the whole week. Admittedly, this is more time consuming, but it prevents buying food that will ultimately end up in the bin. The Students’ Union website also has tips for minimising how much food students throw away, and recipes for using up leftovers can be found easily online.

It is impossible to ignore the fact that being a student produces rubbish. There are going to be cans and bottles left over from nights out and pizza boxes from hungover Sunday afternoons. But it’s about making more of an effort to control what happens to this waste, rather than just moving it from the kitchen table to the bin, or throwing it in the street. The university is trying to increase the source separated recycling rate on campus, and even just using the correct bins for waste helps. Being a student doesn’t mean your rubbish isn’t your responsibility.