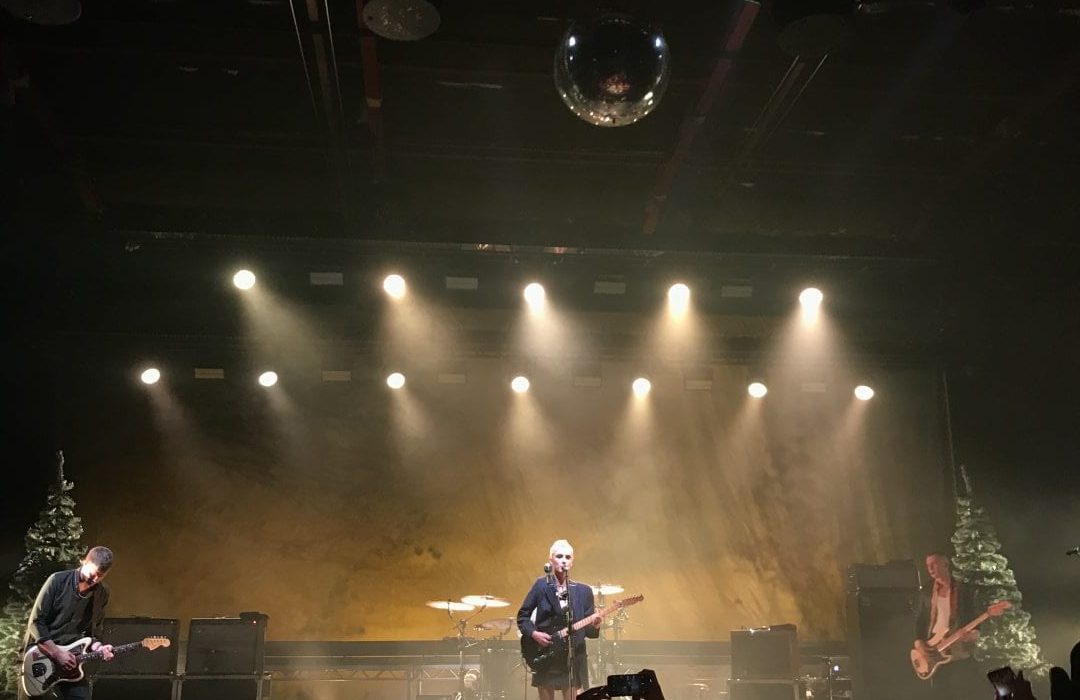 It’s been a hectic few months for the London alt-rock four piece, Wolf Alice. Since dropping their critically acclaimed sophomore record, Visions Of A Life, the band have been touring extensively across the world, cementing themselves, perhaps, as one of the genre’s most invigorating acts. It’d be easy for Wolf Alice to rest on their laurels, but this is a band who never do things by half measures – one of their final shows of 2018 sees them taking on Victoria Warehouse with all the frenzied passion that fans have come to expect, with a few tender moments thrown in for good measure

Wolf Alice are a band that have demonstrated their musical versatility repeatedly throughout their albeit brief lifespan. The early EPs were an eclectic mixture of folk, shoegaze, and fuzzy nineties-esque grunge, creating a rather idiosyncratic soundscape that the band have continued to twist and turn with each new release. Their beautiful debut, My Love Is Cool catapulted Wolf Alice to the forefront of the indie rock scene, and they’ve held on to this position ever since. Last year’s Visions Of A Life, the Mercury Prize winning record saw the band reach new heights, solidifying themselves as the unquestioned alternative zeitgeists of the decade. Those packed in to Victoria Warehouse’s cavernous expanse were in for a treat.

The performance is nothing short of a career-spanning masterpiece, a poised and well-balanced blend of tracks from both albums and a sprinkling of EP classics to create a coherent set. ‘Yuk Foo’, the glitchy, riotous single from Visions opens the night up, with ‘You’re a Germ’ hot on its tail, the crowd already splitting apart in preparation for the song’s impending countdown before the chorus. It’s a trend that is repeated over and over during the course of the show, with fan favourites ‘Visions Of A Life’, ‘Fluffy’, and ‘Space & Time’ all instigating a riotous atmosphere within the room.

A symbiotic relationship between audience and band is obvious throughout the show. The ever-abrasive Theo Ellis on bass is a seminal figure to watch during their live performances, seen frequently prompting everyone to go wild in between his frantic movements across the stage. Wolf Alice certainly feed off of the energy in the room to give an electric stage presence.

In between the moments of high octane power are some touching respites. The instant classic ‘Don’t Delete The Kisses’ (complete with glittering disco ball) sees friends and lovers alike link arms and sway in a rare moment of tranquillity. Tender EP track ‘Blush’ is delivered with such elegance from Rowsell that it’s hard not to be moved. Elsewhere, ‘White Leather’, one of the band’s most elusive, yet beloved releases to date is given a rare live performance much to the delight of the band’s long-time fans.

The omission of songs like ‘Sadboy’ and ‘Your Loves Whore’ in favour for ‘Sky Musings’ or ‘After The Zero Hour’ feel like a bit of a missed opportunity, but it’s refreshing to see Wolf Alice give some of their more slower, experimental tracks the opportunity to be played live.

In an industry that is frankly oversaturated with cliché, uninspired and downright dull guitar-driven bands, perhaps Wolf Alice are the genre’s saving grace. Rather than confine themselves to one particular genre, the band have the propensity for exploration and experimentation. Yes, there is undoubtedly room to grow, but Wolf Alice are more than capable of this. For now though, it’s time for a well earned break.