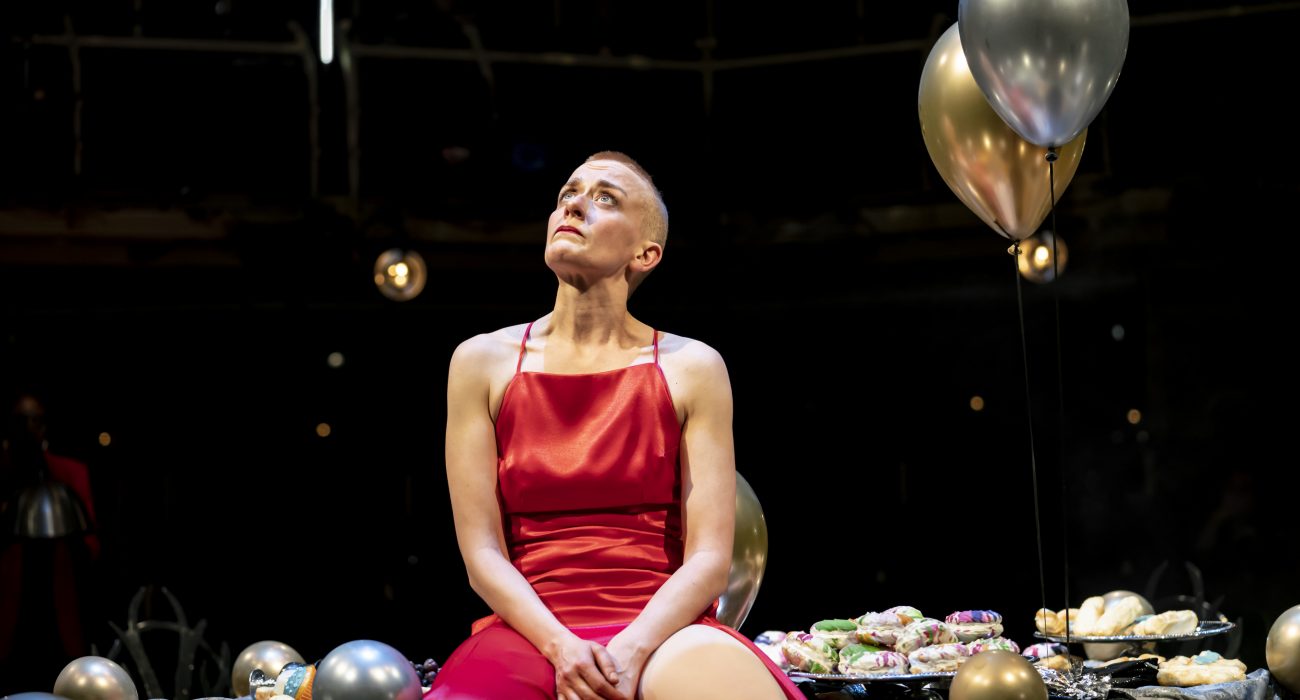 In what might be one of the only productions of Macbeth to cast the title role as a woman, the Royal Exchange Theatre takes on one of Shakespeare’s most famous works to explore ideas about what it means to be ‘masculine’ or ‘feminine’. Directed by Christopher Haydon, the production encourages its audience to think critically about gender roles both past and present.

The play actively invites the audience to question whether having a female Macbeth makes a significant difference to Shakespeare’s work, when the social background in which the play is set remains the same. Macbeth still exists within a traditionally masculine culture where conflict and power are the foundations of society. Given this, does a female Macbeth in a male-coded environment challenge the masculinity of such a setting? Does changing Macbeth’s gender but not the culture she exists within say anything significant about gender roles? What statement is being made if the outcome is exactly the same; that a female Macbeth falls victim to the same destructive ambition and thirst for power as a male Macbeth?

These questions are asked again and again throughout the play. By leaving in the original pronouns (such as when Macbeth loudly cries out “I dare do all that may become a man”), this production leads us to challenge the construction of gender both in Shakespeare’s original work and this re-invented version.

Another interesting component about this production was its portrayal of Lady Macbeth. One of Shakespeare’s most iconic female figures, Lady Macbeth harshly rejects femininity. It was refreshing to see how this played out in a world where women held significant positions of power. At times, this was more of a weakness than a strength. The famous line “Unsex me now” didn’t carry as much weight, and her fixation on the weaknesses of womankind seemed almost incongruous in a setting where women were only shown as figures of strength.

Despite this, Ony Uhiara was brilliant as Lady Macbeth. Acting alongside Lucy Ellinson (Macbeth), it was refreshing to see the casual intimacy and tenderness exhibited between the couple – and how that slowly deteriorated over the course of the play.

Ellinson’s portrayal of Macbeth was likewise captivating, possessing a natural arrogance when interacting with other characters, yet exhibiting a raw vulnerability in soliloquies.

Also noteworthy for his performance is Theo Ogundipe, who shone in the role of Banquo. He portrayed him with a laidback sort of ease that was gradually lost as the action of the play unfolded. The relationship between Banquo and his son, Fleance (Ayanda (Yandass) Ndlovu) was one of the highlights of the performance, the dynamic between them heart-warming and believable.

Staged in the round, Macbeth saw actors and audience combined. Props and cast-members were planted in the seats to shock and surprise audience members when they were revealed. The actors made their exits and entrances between the rows of audience members, climbed along the scaffolding surrounding the theatre, and even occupied empty seats within the audience. Royal Exchange’s production of Macbeth involved its audience by bringing us directly into the corrupted courts of Dunsinane Castle, giving us an intimate view from which to watch the tragedy unfold.

The set design (Oli Townsend) of the performance cleverly mirrored Macbeth’s descent. It was at first minimal but gradually became more and more lavish, culminating in the extravagant banquet Macbeth holds to celebrate becoming queen. Balloons fell from the roof, confetti burst from cannons, and strobe disco-lighting surrounded the characters onstage. The production felt chaotic, with an ever-changing set and a hoard of props that were continuously strewn about the room before being recollected for sombre moments. Given the chaos inherent within the play, this is perhaps fitting.

In his time, Shakespeare adapted his plays from the source material in order to make it relevant to a contemporary audience. It is therefore fitting that the Royal Exchange’s performance of Macbeth attempts to do the same. Above all, Macbeth is a tragedy about the danger of ambition and what happens when power corrupts. This production appears to make the case that anyone can become folly to these influences, irrespective of gender.

Macbeth runs at the Royal Exchange Theatre until 19th October.