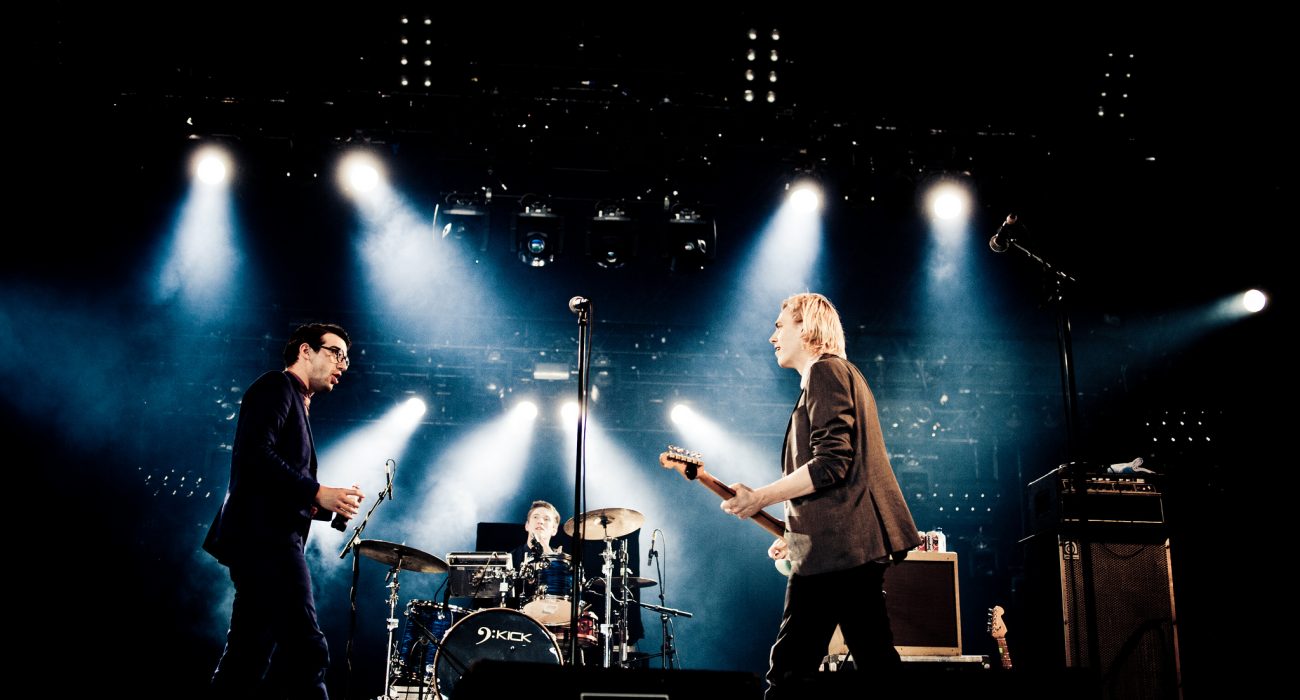 It is not often that the UK’s Prime Minister features in a rock band’s live set, but Spector are clearly an outfit with little regard for convention.

“I’d rather be dead in a ditch”, repeated Boris Johnson’s booming voice as lead singer Fred Macpherson, led the band onto the stage. Much to the delight of the youthful crowd, the Prime Minister’s wish had been duly granted, or, at least, for the sake of Halloween they could believe it. There he stood: Boris Johnson covered in blood and leaves, presumably having been dragged from the aforementioned ditch.

If Macpherson’s costume showed one side of the band, opener ‘Bad Boyfriend’ demonstrated the other. Driving instrumentals and self-depreciating lyrics saw the band offer-up their more introspective character, which was graciously accepted by a fixated audience. The band had effortlessly engineered full control over the room inside the first song. The tone was set.

It is fair to say that the average crowd at a Spector gig consists almost exclusively of die-hard fans. They are not a band who attract a passing interest. And from the dulcet opener to the high-octane follow-ups ‘Celestine’ and ‘I Won’t Wait’, they expressed their devotion in a series of increasingly volatile mosh-pits. The crowd knew every word and maintained their energy regardless of tone or tempo. It’s a wonderful feeling to be surrounded by a group of people finding one voice in such spectacular fashion.

Given Macpherson’s already blatant acknowledgement of the elephant in the room, it was inevitable it would be readdressed. Spector have never shied away from using their platform to convey strongly left-wing views, and in no song is this more prevalent than ‘Born in the EU’. Released on the day of the referendum as a love letter to the Union, the band have rarely performed it live. But considering this gig fell on the day the 50-year partnership was set to be terminated, the band could not resist unleashing it. This endures as one of the night’s more memorable moments.

As the night surged forward at breakneck speed, the crowd continued to lap up every minute. But rather to their disappointment, the show reached its climax just short of the hour mark. ‘Never Fade Away’ offered a rare break for the raucous crowd, allowing them to recharge for the long-term favourite, ‘Chevy Thunder’. The gig then finally reached the peak of its crescendo with the pulsing bass of ‘All the Sad Young Men’. The morose finale was relished by the audience, who turned the melancholic nature of the song into a sheer state of euphoria.

The band triumphantly left the stage to chants of “one more song”, but the crowd’s appetite was left unsatisfied. Despite the set’s excellent finale, spectators were left feeling that it came all too soon. For a band whose discography totals almost three hours, a one-hour set left a little to be desired. And yet, it did not detract much from the overall quality of the set.

A lot of bands are capable of reproducing a well-polished studio sound on stage, but Spector are able to go further than this. They perform every song with more energy and bite than could ever be captured by their endeavours in the studio. The synth-hooks are bigger, the guitar-riffs are packed with more flair, and the lyrics seem to resonate the way they did on the day of their conception.

Although it appears Spector have not gained many new fans in recent years, they again showed why they are deserving of the faithful support they have accrued over their eight-year career.