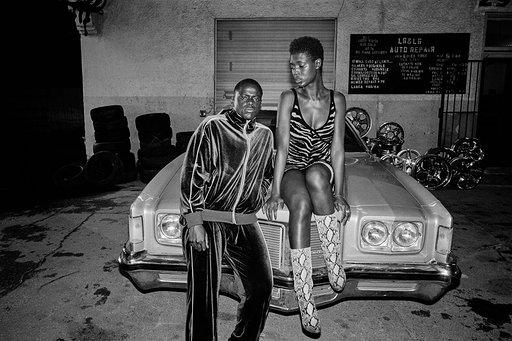 Queen and Slim may well go down as one of the most frustrating films of the last decade. It’s gorgeously shot, brilliantly acted, has a great soundtrack, and at least has a discussion of radical politics — but it just feels empty. It’s ambitious and clearly wants to start important discussions, but it doesn’t engage the audience emotionally enough to give any of those discussions a solid landing.

The story sounds interesting on paper; a young black woman and man (who remain unnamed until the end of the film so, for simplicity’s sake, I’ll just refer to them as Queen and Slim respectively) go on a Tinder date. It’s awkward and they have little chemistry, but they’re forced into working together after being pulled over by a racist police officer – who Slim kills in an act of self-defence – and the two hatch a plan to run away together to Cuba.

Over the course of their journey, they cross through Ohio, New Orleans and Southern Florida, meeting various characters serving to support and derail them along the way. It’s a solid premise but the film seems to fall apart around when the cop is shot. The biggest problem that undercuts Queen and Slim is that its titular characters have no chemistry, and their blossoming companionship and eventual romance feels completely out of circumstance. Take most similar road movies (Bonnie and Clyde, Thelma and Louise) and what makes those movies memorable is the chemistry between their leads and how the audience genuinely wants them to succeed.

By contrast, Queen and Slim feels shallow because the characters deliberately start as awkward and unfit for each other. She’s a tough-talking lawyer, he’s an easygoing religious type. From that point though, the film does very little to develop their relationship. That’s even before the film introduces side characters that seek only to represent political figureheads.

Jodie Turner-Smith and Daniel Kaluuya put their all into the lead roles, but the script just doesn’t give them enough to chew on. What makes this even worse, however, is how the film also wants to talk about modern issues that seriously warrant discussion. Police brutality and media coverage of anti-black violence are put at the front and centre, but anything the film has to say completely loses its impact when the characters just don’t work. At times you find yourself pining for Ava DuVernay or Spike Lee to at least inject some humanity into the thing and make it more thought-provoking.

The film isn’t entirely without merit; director Melina Matsoukas, most known for music videos, does a terrific job in creating a rich aesthetic for the film full of bold colours and terrific shots. While there are significant problems with the script, Lena Waithe clearly knows how to build tension as shown in many of the film’s more nailbiting sequences. While I think this film doesn’t quite hit the mark, there are at least interesting voices behind it that are worth listening to.