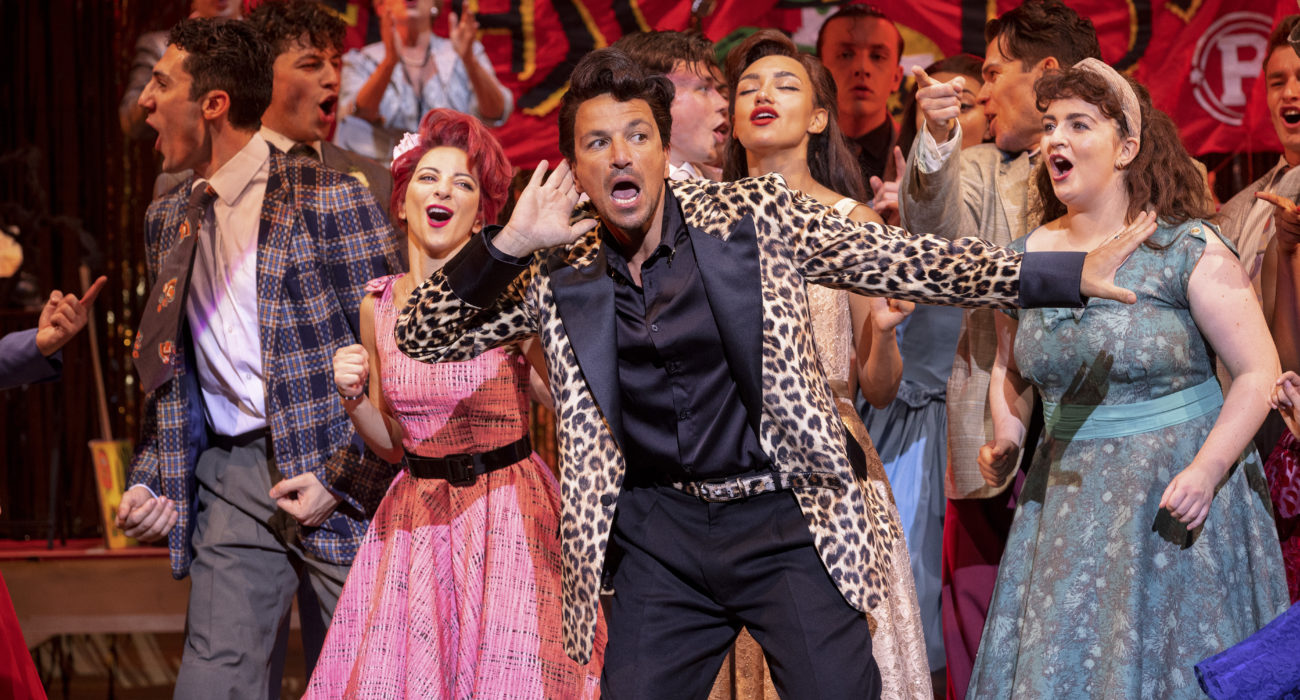 Yet another stage adaptation of a movie, you might lament, but no, for the stage musical Grease actually came before the film. Get it right, stud!

The last two ATG press nights I’d seen had been polar opposites: Dirty Dancing and Heathers. Not stylistically – for they are both camp stage adaptations of old movies with a love story at their centre – but in terms of art and talent. Whilst Heathers has to be one of my favourite musicals, Dirty Dancing is the only show I have written a bad review for.

This meant that I’d be judging Grease against one of the best musicals I’ve ever seen and one of the worst.

I hate to admit this but I was falling asleep during the first act – and during the second act, I couldn’t wait to get out of the theatre.

Now, this is not because I was not enjoying the show – in actuality, the show was fantastic (at least the parts I was awake for). Rather, I was operating on four hours sleep because I had been at The Circle‘s wrap party the night prior and then had a full day of work. So, I downed some Coke during the interval, which woke me right up; I was ready to properly enjoy the second act of this classic show. But the Coke went straight to my bladder; I desperately needed to pee!

I brought my best friend, Carly, along with me. It was her first press night, and she absolutely loved Grease – as did my colleague from The Circle, Megan, so maybe they should be writing this review.

But here’s what I do remember…

As I have made clear in previous reviews, I am a sucker for an elaborate set. Not every musical needs one but most do benefit from them; they add majesty and awe to the production. Grease’s set did not disappoint; it changed for every scene, transporting us from high school to a diner – to a fantastical dream world, inhabited pink-winged angels.

Although it was press night, Ellie Kingdom went on for Sandy; she is billed as “alternate Sandy”. I’m not sure if Georgia Louise was ill or if Louise and Kingdom take press nights in turn. If Louise was merely ill, I imagine it was quite daunting for Kingdom to have to cover on a press night. But had ATG not let me know about the cast change, I would have had no idea that Kingdom was the alternate.

Her sweet portrayal of Sandy garnered sympathy from the audience, and she absolutely blew us away with ‘Hopelessly Devoted To You’ – especially those high notes towards the end of the song.

When alternates and understudies get their moment, they go for it – and Kingdon went so hard, she almost blew off the roof of the Opera House!

Inez Budd also had to miss press night. Instead, Marty was played by Tara Sweeting, who delivered a beautiful rendition of ‘Freddy My Love’, a song which was criminally cut from the film adaptation. I first heard the song in an amateur production of Grease in Colne, Lancashire, and I fell in love; I could not believe that the decision was made to remove such a sweet song from the film.

‘Freddy My Love’ finally had its moment in Grease Live! back in 2016, where it was performed by the wonderful Keke Palmer. It’s not easy to compete with Palmer but Sweeting did not attempt to; she held her own, and did her own thing, delivering a beautiful ballad that soothed our ears.

Tendai Rinomhota’s portrayal of Rizzo was hit-and-miss. She played her very well, and though her nasally voice grated on me, it was part of the character that she had crafted – and she did a brilliant job crafting her.

But whilst she has a great singing voice, I was not particularly fond of her rendition of ‘There Are Worse Things I Could Do’. Whilst Stockard Channing and Vanessa Hudgens conveyed heavy emotion in their slow, soulful takes on the ballad, Rinomhota sang at such a speed that it kept me from being touched by her lamenting words.

Whilst her high-pitched voice worked well to make Rizzo annoying, it did not work so much in this song – Rizzo is not supposed to be annoying in this song; we are supposed to finally understand her – but, at times, I could hardly even understand what she was saying. Thank goodness I know the song’s lyrics off by heart…

I’m not sure why this version of the ballad was arranged to be sang so quickly – perhaps Rinomhota found it easier to sing the song quickly because of the squeaky accent she had to put on. I know that Rinomhota has a wonderful voice, and I hope to see her in a show where she gets to use her real voice.

Whilst the film version of Grease turns ‘There Are Worse Things I Could Do’ into a monologue, the stage version sees Rizzo singing to Sandy. The lines “I could hurt someone like me” and “but to cry in front of you” became all the more poignant and touching. I cannot fault the way in which Rinomhota and Kingdom responded to each other in this scene.

The star of the show was, of course, Peter Andre, who played Teen Angel and Vince Fontaine. I think I might have been more excited to see Andre than I was to see Grease, for whilst my mum grew up watching Grease – thanks to my mum, I grew up watching Peter Andre’s reality shows!

I think Andre surprised the audience with his sheer talent. I’m often a little disappointed by star performers who are there because of their name and not their talent but Andre’s acting and singing abilities both deserve great praise. His performance of ‘Beauty School Dropout’ was, quite possibly, the highlight of the show.

I did find it a little strange that he was at the back of the stage, pretending to play records, for such a great deal of the show. It was a little distracting – especially because I knew it was Peter Andre (not just an ensemble member) so I couldn’t keep myself from watching him instead of the lead characters at the stage front. It can’t have been great for him, having to stand there doing nothing for so long.

I was reminded of Toyah Wilcox’s performance of Queen Elizabeth I in Jubilee at the Royal Exchange Theatre – she had to sit on the circle for the entire show before finally coming down at the end to perform one of her hit songs.

Granted, Andre came and went, and he at least got to move around, but the show could have done with a little less of him in the background.

To go back to ‘Beauty School Dropout’ – whilst much of the cast gave great performances, even most of the leads were not the most memorable, but Marianna Neofitou played Frenchie to perfection.

Whilst the show was high-velocity, energetic and lots of fun, I was left a little disappointed by ‘You’re The One That I Want’. The same thing happened during the amateur version of Grease I saw; it just lacked the energy that I had been overwhelmed with throughout the rest of the show.

Given the sheer energy that this production requires, perhaps the cast are just a little tired by the end of the show, or maybe John Travlota and Olivia Newton John’s version of the song is just so iconic that nothing else could possibly compare. We must remember that they had many takes to sing and film their version, unlike those performing in the stage version; there is an instant audience response.

As much as I loved Kingdon in the role of Sandy, the way she walked on stage for this song lacked the sass and sex appeal that Newton John oozed in the film version. Kingdon just strutted onstage as if Sandy was not even trying to surprise and impress Danny. The song is supposed to showcase a new Sandy, but Kingdon failed to make a big enough distinction between the two. Still, her singing and dancing were fantastic, so we can forgive her for her walk.

The show ended with a medley of songs from the musical, lead by Peter Andre, of course – who came on stage as if he had been playing the main character. We were on our feet dancing, waiting for him to belt out ‘Mysterious Girl’, but sadly that moment never came.

Grease plays at the Opera House until 23rd October and then continues its UK tour throughout 2021, with Peter Andre playing at certain performances.