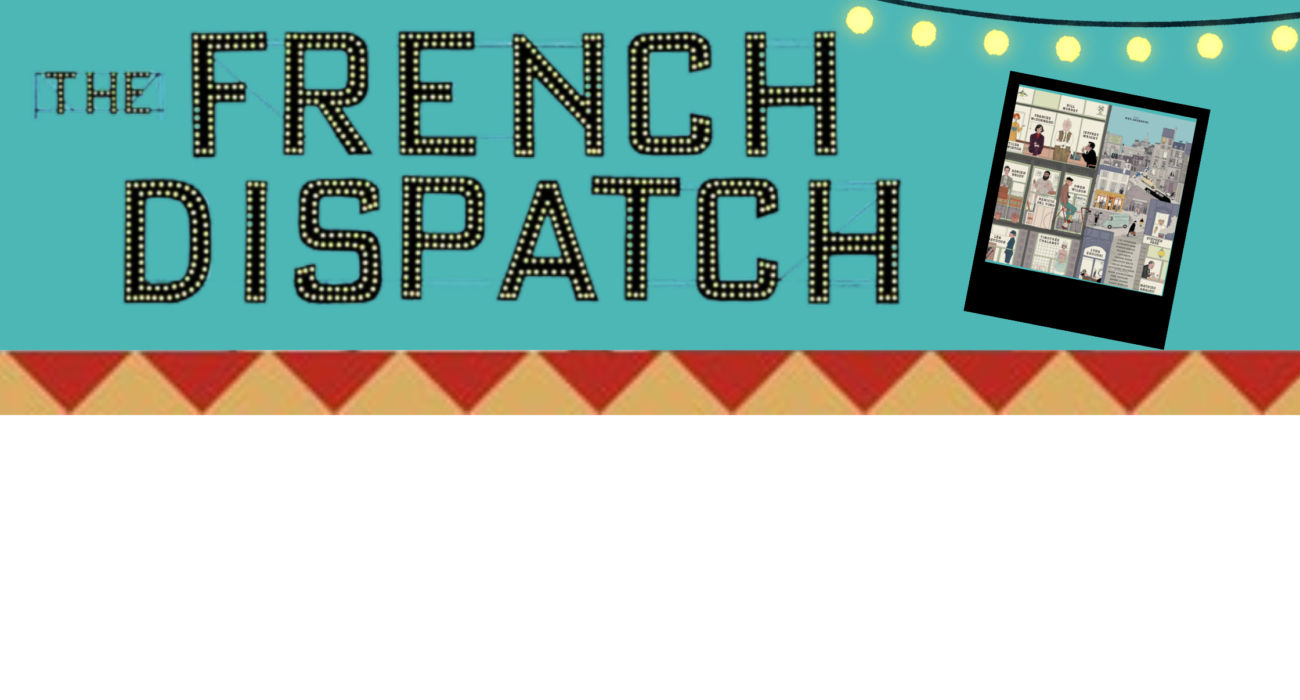 After a year of waiting, Wes Anderson’s new canvas of operatic sensation has erupted, in characteristically flamboyant style, onto our screens. Filled with Anderson’s classic precision camerawork, raspy and hectic score, and more rectilinear shots than one would care to imagine, the picture is not just a masterful ode to print journalism but a gargantuan display of cinematic complexity… or is it?

The French Dispatch begins in the office of Arthur Howitzer Jr (Bill Murray), the famous editor of New Yorker-esque paper The French Dispatch. Armed with his journalistic advice of “just try to make it sound like you wrote it that way on purpose”, audiences follow his team of trusty journalists in the three investigative stories (four if you include the much shorter Owen Wilson report in the first few ‘pages’) that make up the final edition of the paper.

Anderson seems to catch a wonderful impression of France, both stereotypical, as if he’d never visited, but also wholly accurate, the winding streets and genial sense of the place. Undeniably a lot of fun, it is fantastically scored, wonderfully acted, and unapologetically eccentrically aesthetic.

However, claims that this is the most Wes Anderson film of his career may be unfounded.

Behind his iconic visual experiments is sentimentality and touching human quality. More than anything, Anderson’s ‘style’ is to write rich and emotionally sympathetic characters in some of the most obnoxious people. Monsieur Gustave in The Grand Budapest Hotel springs to mind. Haughty and pretentious, Anderson somehow foregrounds the man’s fatherly side beneath his veneer of self-entitled bombast.

By virtue of its three distinct stories, The French Dispatch offers none of this touching depth. What is arguably the foundation of Anderson’s distinct style, the very thing that enables him to perform his eccentricity to the extreme, is the one thing absent in this new entry. And it shows. The stylised decor, the blunt humour so intent on not recognising itself as being funny, the wild haired charisma of its star-studded leads. All of it is there, but none of it has any meaning. The French Dispatch doesn’t give us long enough to get attached to its main characters, and whilst it does encourage fleeting moments of affinity, the emotional gravitas of his other pictures is glaringly lost.

The French Dispatch is therefore a strange film, neither here nor there, not quite truth not quite fantasy. As is common in these films, it celebrates loss, a sort of former glory that can only be reached through this unique style of filmmaking. A milieu of stories leads to a milieu of opinions. Whatever you think of Anderson, here are three reviews of the three main narratives for you to enjoy!

The First Instalment in The French Dispatch

Incarcerated for the murder of two men at a bar, Rosenthaler loses his passion for the arts, before meeting Simone, a prison officer whom he becomes quickly infatuated with. Inspired once again to pick up the paintbrush, Rosenthaler paints the abstract piece Simone, Naked, Cell Block J. Hobby Room. Fellow inmate and art dealer Julian Cadazio (Adrian Brody) soon convinces the artist to sell the piece and works to gain the tortured artist fame and recognition in the outside world. However, Rosenthaler’s stubbornness and refusal to churn out art soon cause problems for both men.

The Concrete Masterpiece explores the problems created when art is monopolised, and the effect that pressure can have on an artist, and the art they produce. Cadazio’s opinion of Rosenthaler’s art varies dramatically depending on how much money he thinks he can make off it. Whilst amusing to watch, it seems possible that Anderson is making a comment about his own ‘artwork’. That art is personal and loses its meaning when capitalised on in this way, is central to this episode.

The French Dispatch reaches new heights of symmetry and colour contrast. The effortless transitions from Anderson’s usual bright colour scheme to black and white shows a contrast that mirrors the French towns’ dingy past, and colourful present. The episode oscillates between these two contrasting colour schemes, enabling us to see both the vibrant colour of Rosenthaler’s art but also the figurative shapes once the image is placed in greyscale.

Wes Anderson clearly favours certain actors, with The French Dispatch being no different. Benicio del Toro gives a wonderful performance as artist Rosenthaler, bringing depth to the mysterious character whilst Adrian Brody brings an element of comedy to the piece. Every actor fits their role as if they were written for them.

However, the film and the episode can be particularly hard to follow at times due to how densely packed it is. Anderson is famous for his dialogue-heavy, yet boldly visual storytelling, although in this edition to his repertoire he may have gone too far. I believe that this film requires many viewings to be fully appreciated.

The Concrete Masterpiece is hilariously existential and will leave you pondering the meaning of art and the dark side of artistic fame, or will simply leave you laughing.

Revisions to a Manifesto

The second vignette in Wes Anderson’s anthology, Revisions to a Manifesto, follows a student uprising in the fictional French city of Ennui sur-Blasé. Frances McDormand’s stoical journalist, Lucinda Krementz, is sent to investigate the root of the students’ angst and in doing so becomes entangled with their passionate, chess-playing leader Zeffirelli (Timothée Chalamet). What follows is a chaotic, poetic, and occasionally melancholic tale about the affiliation between love and politics.

Anderson has often been criticised for prioritising style over substance and this certainly is a romanticised view of a world in which conflict can be solved by a game of chess. Although the story probes at some deeper themes of loneliness and the temporality of youth in the juxtaposing characters of Krementz and Zeffirelli, it never quite manages to get beneath the surface. Instead, Revisions to a Manifesto exists as a light satire of student activism and the myth of journalistic integrity.

Amongst the usual menagerie of familiar faces is Timothée Chalamet, who holds his own against McDormand (brilliant, as always) as the charismatic student Zeffirelli. Chalamet is almost custom built for the Wes Anderson universe, with a quirky moustache and hair to rival the guy from Eraserhead. Zeferelli would not look out of place in the Northern Quarter. He spends most of his screen time partaking in the eccentric hobbies such as smoking and writing a poetic manifesto on a typewriter in a French café during a revolution. Standard Anderson.

Zeffirelli and his peers are pretentious in a way that’s specifically fun when you’re only nineteen. Anderson captures that commitment to a cause in a frenetic, tongue-in-cheek script that despite never outwardly mocking its young characters for their political naivety, is very much aware of their youth. After all, students do love to protest and there’s a certain nobility in wanting to effect change in your surroundings, the intensity of which seems to fade with age.

The most fascinating aspect of Revisions to a Manifesto is undoubtedly the China-doll structure that Anderson implements. The structure of a story within a story (and at one point, a play within a story within a story) is a testament to Anderson’s ability as an auteur to delicately layer narratives over one another. The result? A rich, stylistically quirky tale with a host of well-renowned actors (catch the brief appearance from Christoph Waltz) dedicated to the optimism of youth.

The Private Room of the Police Commissioner

The Third, and final, Instalment

The colourful mosaic of lives portrayed in The French Dispatch lays its final feature with the vignette The Private Dining Room of the Police Commissioner. We follow the memories of Roebuck Wright (Jeffrey Wright), a food writer who has the ability to recall with extreme precision every line of every piece he’s ever written. The piece begins from the expedient of a live interview with a television presenter as the plot rapidly unfolds into the story of the police officer / chef Lt. Nescaffier, who saves the police commissioner’s son from a gang of criminals who had kidnapped him.

Ranked among one of the finest cinematic and thematic works in Anderson’s 25 years career, the last story reaches the apex of the visual experimentalism cleverly built over the course of the movie. Through transpositions of coloured and black-and-white frames, changes in aspect ratio, switches to animation and live-action scenes, and dynamic camera movements, the episode is a chaotic marvel.

The vignette is also surprisingly un-Anderson at times. At points of tension, the director abandons the use of wide lens and deep focus to convey a sense of psychological isolation of the characters from the frenzied events happening around them.

The episode displays two different narrative types: the comic (and almost grotesque) kidnapping and rescuing of the commissioner’s son and the sobering final message delivered by Nescaffier, about his desire to belong. This last bit is undoubtedly the most important of the whole story. While wrapping it up in a pensive and anti-climactic way, it also evokes a somewhat sweet morale. We therefore can’t help agreeing with Arthur Howitzer, editor of The French Dispatch, when he suggests to Roebuck Wright that he should keep it as a touching end to his article: it is, hands-down, the most engaging part of it.