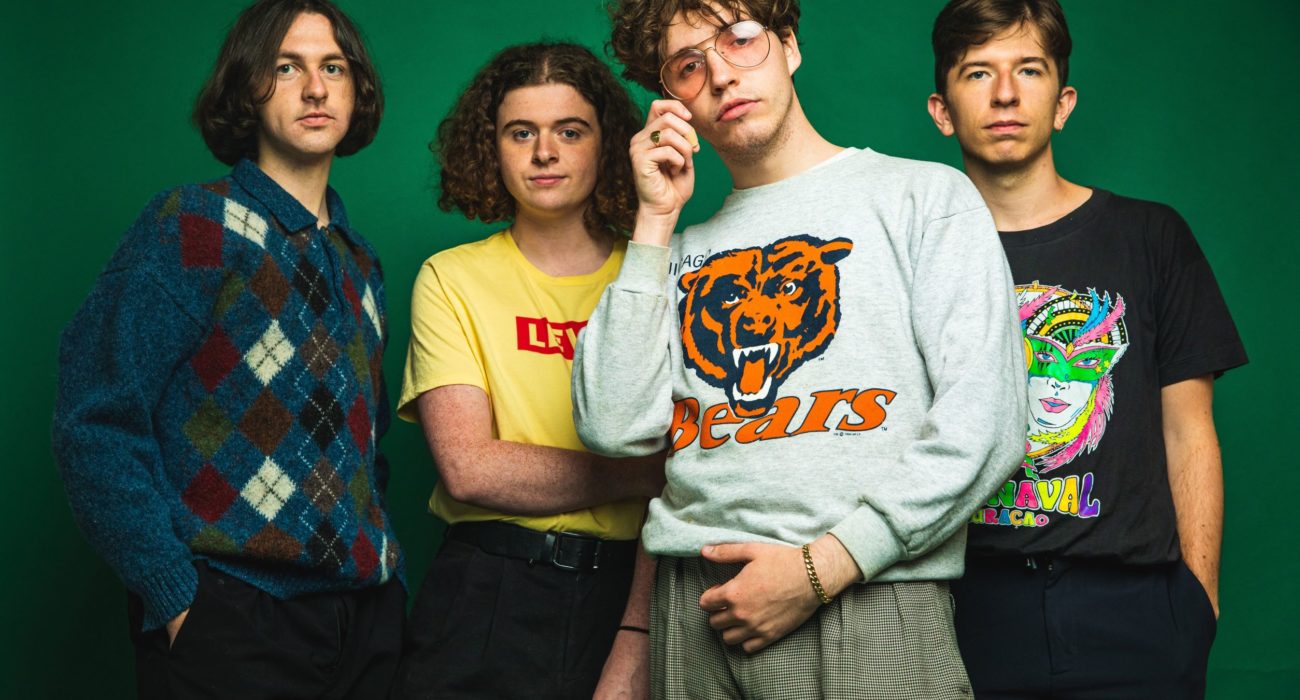 Liverpool four-piece SPINN have been enchanting audiences with their jangly indie-pop anthems since 2016. Their mixture of sunny instrumentals and shimmering vocals has set them apart from other bands of their scene. Having followed the band’s rise in Liverpool, from playing Sefton Park’s LIMF to headlining the O2 Academy, and even playing festivals such as Truck in Oxfordshire, it’s clear the band’s appeal ranges far beyond their hometown.

Their debut self-titled record was released to much acclaim in 2019, cementing their status as ones to watch. The highly anticipated sophomore record ‘Outside Of The Blue’ will be released on 4th February 2022, ahead of their UK tour. With this in mind, The Mancunion chatted to SPINN frontman Jonny Quinn about all things from mental health and politics to horror films and Christmas songs.

Hi Jonny! What can we expect from your upcoming album ‘Outside Of The Blue’? What’s the meaning behind the album title?

It’s named after one of the songs on the album. I had the instrumental lying around for ages. I had quite a bad panic attack and got on the phone to my girlfriend and it calmed me down. Brought me out of that blue type of area. I think the blue is things like depression and anxiety. Being outside of the blue is feeling good, knowing someone loves you.

Is that the main theme for the album, pulling all the tracks together?

The songs are kind of written from the perspective of being in and out. ‘I Believe In Love’ for example is outside. ‘Stargazing’ is about watching movies and feeling happy. ‘Getaway’ is more so in the metaphorical blue. Each of the songs are located in or out of that area.

You’ve mentioned the horror film ‘A Girl Walks Home Alone at Night’ as an influence on your recent track ‘Stargazing.’ Tell me about that.

I really like that film. I just decided to watch it one day and I loved the narrative. It’s set in a mad little village in [Iran?]. There’s a woman skateboarding round the streets at night in a hijab. She’s a vampire taking out all the criminals and then she falls in love with a guy who looks like James Dean. I thought it was really cool to switch it up and not have your typical villain like Freddie Krueger or Jason or something. Just some unsuspecting girl with a skateboard.

Do films inspire a lot of your songs?

This was more of a one off. I wrote a song about a poem once, by Arthur Rimbaud. It’s called ‘I’m In Hell’, inspired by A Season In Hell. It didn’t make the album though. Maybe I’ll release it though. Sometimes I draw influence from things I like. I’m actually working on directing a film next year with my friend Luca. We’re going to try and write a couple of short films.

Is scoring and making film soundtracks something you’d want to go into?

I would love to. I’m alright as a musician but I prefer writing lyrics to music. A lot of the instrumentals are done by Sean, the bassist. I’ve wrote about half the album, but Sean really helps. Sometimes my mind’s a bit scattered and I’m bad at structuring things. I think if I tried to write a film score it’d be done like 6 months after the film’s finish [laughs].

You’ve had a bit of a line-up change – how has that changed the group’s dynamic?

It’s just made it a bit easier. Luke is really chilled out. Him coming in has made things a lot less rocky. Over the years we’ve had 6 or 7 drummers, and now we’ve settled on Louis, and Luke as a lead guitarist. If people want to go and do their own thing, good for them.

You’ve talked a bit about how mental health has been an influence on the record. Can you tell me a bit about this and why it’s important for you to bring such an important issue to the surface?

It’s really important. People can probably say it better than I can to a bigger platform. But being open and honest is the only thing you can do. I’d never really spoken about being down in our music. That’s the main platform for the album. You know, there’s a mental health crisis in this country. The ‘other pandemic’ as people have been calling it. I think it’s important not necessarily to be a role model but to be honest as a musician so other people feel they can open up also.

Is it important for you to combine your art with your political views?

Yeah! In fact, the next single ‘People Should Know Better’ is about that. I like to stay informed but I don’t always like to preach too much from the band. We’re a pop band, so people aren’t always going to want to hear it. I think punk bands often say it better, that’s what they do. But with the way this country’s gone at the moment… The song’s just me kind of reflecting on people voting for Brexit, and for 12 years of the Tories. I can’t believe this is what the British public want. It’s really cruel and selfish that people vote for stuff that results in people dying and children starving. I got quite pissed off, so I wrote a political song. People should know better, and they should be kind!

Do you think where you’re from sort of seeps into the music? Like do you take a lot of inspiration from Liverpool?

Being from Liverpool you’re aware of what the Tories can do and how horrible their policies are. They haven’t treated the city kindly. Me, Louis, Luke, and Sean… we’re all very much left wing.

Has the music of Merseyside influenced you or are your influences more wide-ranging?

We listen to all sorts. For the first album, we wanted it to sound really Scouse. This album not so much. I was really into The La’s at the time. I still love them. The La’s and Cast, that jangly sound. We listen to a lot of American indie music too like Wild Nothing and Beach Fossils. Those New York and Brooklyn bands. We all started the band ‘cos we love that type of music. We’ve moved a bit toward that direction. ‘Billy’ sounds quite like that. In Liverpool, it’s easy to fall into a box as a Scouse band. You get a lot of approval from people in the city but also you don’t want to be trapped by your own walls. We want to reach loads of people.

Obviously, the tour’s been postponed to May alongside the release of the album. What songs are you looking forward to playing and where’s the Manchester show?!

You’ll have to come along to Liverpool. We might be working on adding a Manchester show. I’ve kind of forgot how it feels to play live. It’s hard to imagine the new songs in a live setting at the moment. But I think it’ll go down really well. We’ve still got the rock n roll spirit [laughs].

Any surprises in store? A mix of new and old?

I want to do a cover of Jonathan Richman. Our album’s getting released in Japan. For a Japanese exclusive, maybe we’ll do a cover of ‘That Summer Feeling.’ Maybe I’d play that live. Or people might think I’d lost the plot. My name’s literally Jonathon and… Who’s the person on the planet with your first name that’s the coolest? My answers Jonathan Richman.

(I answered either Sara Pascoe or Sarah from Girls Aloud, but Jonny suggests maybe “Sarah from Corrie”)

What can we expect from your live shows? You’ve got a big hometown headliner at the O2 Academy in Liverpool.

We want to get some good supports. Maybe Monks. They’ll be banging merch. And of course, me singing and dancing like an idiot.

What does the future hold?

Well, we’ve got the album and the tour. And the short films for next year. Oh and my dissertation [laughs]. We got the Momentum Music Fund from PPL. So we’ll be able to record a third album. I’ve got the first song down already. It’s about a guy who’s having a daydream about running away to Rio de Janeiro.

Have you ever been?

Describe the band in 3 words.

Do you have a standout show you’ve done?

In Manchester, Gorilla maybe. It was just the best gig ever. Liverpool’s always belter. But there’s more pressure. In Manchester, you can relax a bit more. We’ve done The Deaf Institute. It was amazing. Again, one of the best gigs we’ve ever played. That’s what I love about being a musician. The crowd were absolutely mental. The stage was vibrating. Maybe we can come back and do another show there!

I’m looking forward to Christmas. We’re doing a Christmas DJ night at Jimmy’s in Liverpool if any Manc students want to come down.

Would you ever record a Christmas song?

We spent most of the budget on recording the second album but now we’ve got the grant through. I wanted to do a Christmas song. But you have to record it in July [laughs]. Next year it’ll come out. It’s going to be sick. I think I’d just call it ‘Christmas Song.’ [sings a preview] It’ll be a bit swingy. I might go back to my old school and get the kids choir to join in for backing vocals. Hopefully we can make that happen next year! Been waiting so long. No one’s asked that before so I guess you’ve got a scoop for The Mancunion! [laughs] Good luck to all the Manchester Uni students with their dissertations! 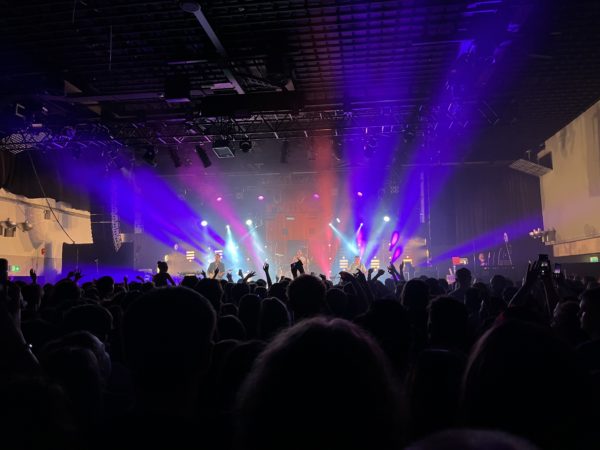 Live Review: “I’m back in Liverpool” and so are The Wombats 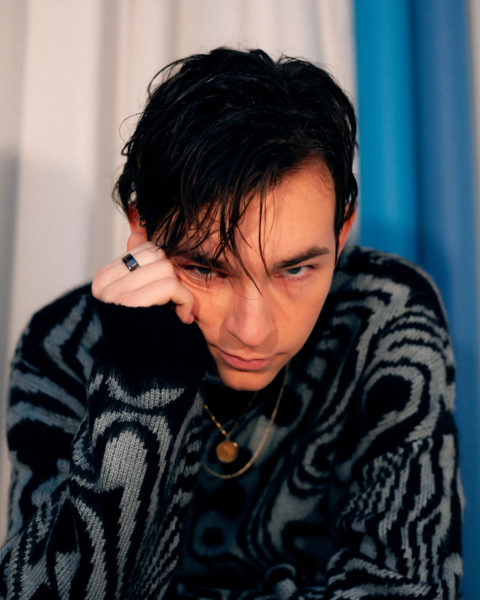