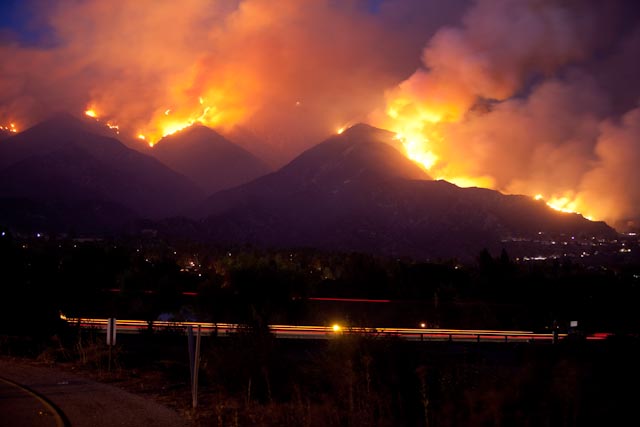 Jake Gyllenhaal shines in this suspense filled remake of the 2018 Danish thriller of the same title. However, this Hollywood-ised remake unfortunately falls short of the original due to its clumsy and poorly executed climax.

The film opens as huge screens illuminate the Los Angeles hills, ablaze with wildfires. And yet audiences spend the entire movie behind the desks and phone handsets of a drab office block. This strange contrast may come as a surprise, yet the tension of the ensuing 90 minutes is all the better for it.

Within this setting we are introduced to Joe Baylor (Jake Gyllenhaal), a 911 operator who is fighting his own personal struggles while begrudgingly dealing with drunks and petty crime as a responder. The opening scenes show Joe as a man falling apart, expertly portrayed by Gyllenhaal from start to finish. Joe’s frustration at the job changes when he receives a call from a woman called Emily (Riley Keough) who he quickly realises has been abducted. What ensues is a tense narrative woven with twists as Joe attempts to rescue Emily from his powerless position in the responder’s office.

The performances from both Gyllenhaal and Keough carry this movie as the action is almost all dialogue based. The frustrated powerlessness of Gyllenhaal perfectly compliments Keough’s terror and panic. Surprisingly high-profile actors play other roles. Ethan Hawke, Peter Sarsgaard and Paul Dano, all have dialogue in the movie but they are barely recognisable, let alone memorable. Regardless, Gyllenhaal is the star of The Guilty, and the movie is aware of this as he on the screen the entire time with seldom anyone else getting screen time aside from dialogue.

Director Antoine Fuqua, whose directing credits includes Training Day and the Equalizer franchise builds the film on palpable, anxiety-inducing tension. The close-up camera work creates a desperate, claustrophobic atmosphere throughout which, considering the film is set in what is effectively an office building, enables audiences to still feel as if the action is unfolding before you rather than simply being described. Apparently, the film was shot in 11 days, under rigorous COVID-19 restrictions which, despite its singular setting, is an impressive feat.

The elephant in the room is that this remake is a literal copy of the original, in many places replicating it word for word. This is nothing new as Hollywood often takes the original screenplays of foreign films and remakes them for English speaking audiences. The Danish original had a budget of approximately $500,000, likely not even enough to afford an actor of Gyllenhaal’s stature. Considering Netflix acquired the rights from an American production company who remade it for an enormous $30 million, it’s safe to say that Netflix could have just acquired the original, saving money and bringing popularity to the Danish film industry rather than simply remaking it in English.

As Korean director Bong Joon-Ho (Parasite) once stated, “Once you overcome the one-inch-tall barrier of subtitles, you will be introduced to so many more amazing films”. It is due to this barrier that Hollywood feels the need to remake original foreign films to bring them into the mainstream. Had Parasite not captured the attention of English-speaking audiences would we be seeing this Oscar winning film remade and starring Emma Stone and Timothée Chalamet as the siblings in 2023?

Regardless of the bigger issue The Guilty certainly has its strong moments. The performance of its two stars as well as Fuqua’s camera work make it a short but enjoyable thriller. The ending doesn’t quite have the pay off it was probably aiming for but doesn’t detract from the film as the twists in the third act more than makes up for it.

As a 90-minute long, Netflix available, engaging thriller, it’s worth your time even if its just for Gyllenhaal’s performance. However, in the unlikely event you can find a way to access the 2018 Danish original I would highly recommend stepping over that ‘one-inch-tall barrier’ to support a truly original movie which took a fraction of the budget and attention of the Hollywood remake.