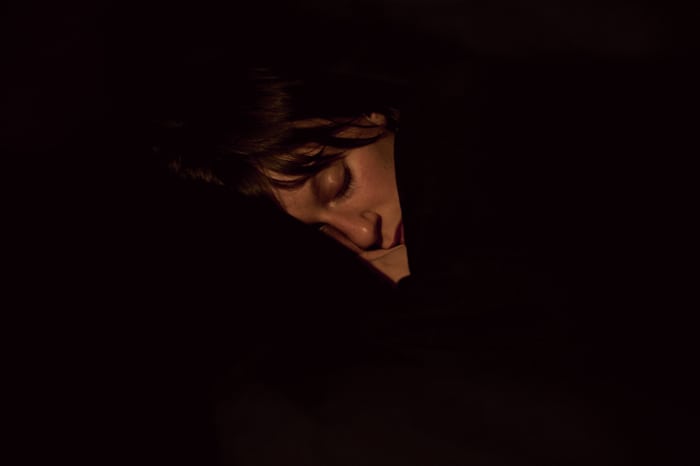 Review: ‘I’ – The Sleep Collection

Art exhibitions and creative spaces are not the natural grazing grounds of the Mancunion’s laziest contributors. However, living with the Arts editor does, at times, mean we have to bite our tongues and agree to attend such cultural arenas. Our first foray into creativity saw us attend ‘I’ – The Sleep Collectionat one of Manchester’s (sort of Salford?) most titillating industrial spaces, the Islington Mill.

Roshana Rubin-Mayhew installed a bed into one of the twenty gallery spaces at the Mill for two weeks from the 6th-20th November. Each night over the first week, members of the public were invited by Roshana to sleep over whilst they were being photographed falling asleep, during sleep and as they were waking up.  The resulting triptych of photographs were arranged together around the bed, made up with black sheets, forming the focal point of the exhibit.

Initially confronted by what appeared to be a potentially underwhelming set up, we opted to quell our boot shaking fear of the arts and embrace what we had been ordered to see.  In doing so, it became obvious that the image of someone sleeping carries far more cultural, emotional and aesthetic significance than may first appear. Lucy embraced her academic calling and Toby attempted to keep up as we embraced the restful yet challenging images.

Most of the pictures were composed of the subjects face, occasionally with a section of torso and/or arm. The ambiguous camera angles free the subjects of the constraints of the bed they’re in, suspending them in a state of timeless innocence.  In particular the central images of the triptych, depicting actual sleep, evoked the expanse of the dreaming mind or as if they were poised in space.

Although all compositionally similar, each image had an aesthetic beauty emphasised by subtle individualities. The sleeping self, that is to say ourselves at our most vulnerable, tends to be something belonging in the private sphere, a state only those closest to you would witness. Transferred to the public arena, we engage almost voyeuristically with the act of sleeping, and are for a moment gifted access to the private space of the individual. It is the sense of immediacy and intimacy that the exhibition so strongly conveys.

Although attending under duress, we both left the Mill with a more informed    sense of the capacity of photographs to convey truth and intimacy. There is an honesty in the exhibition in part due to the photographic medium but also reflected in the simplicity of the composition.