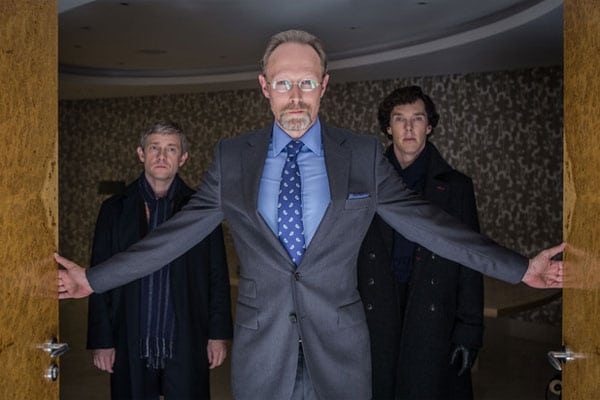 On January 9th 2014 millions of viewers tuned in to the finale of Sherlock series 3. But it wasn’t St Benedict or Mr and Mrs Baggins that caught the eye.  Not even Moriarty could steal the show.  It was the baddie – Charles Augustus Magnussen – suave and sophisticated, good and evil, a powerhouse of a character, blitzing Sherlock and catapulting another Danish star into our midst. Despite being flanked by two of the hottest actors on Earth (or Middle-Earth at least), Lars Mikkelsen dominated proceedings with seemingly effortless ease.  How do these Danes do it?  Denmark is quite simply becoming the epicenter of the world’s TV and cinematic talent in writing, acting and directing.

What’s the secret?  No secret: just don’t compromise, don’t patronise, and don’t stint.  Brilliance comes at a price, but the intricate storylines, the detailed characterisation and the often brutal and graphic honesty of the portrayals of human nature at its best and worst are not just something we can cope with, but something TV and film audiences have been crying out for. Danish-Swedish drama The Bridge is a classic example.  Blazing across our Saturday nights at the moment, it takes characters with a past to overcome and a future to face, and chucks them into the present to create a panoramic sweep of society with colourful characterisation that rivals some of the best TV dramas and novels. Fast-paced yet in-depth, subtle yet impactful, dark yet oddly comic in places, these TV series leave you feeling exhausted yet wanting more week after week.  And the acting is just brilliant too – check out Kim Bodnia from The Bridge, Lars Mikkelsen himself in The Killing and Borgen, or indeed his brother, Mads Mikkelsen best known for producing an incredible performance earlier this year in Thomas Vinterberg’s The Hunt – up for this year’s Academy Award for  Best Foreign Film.

What about directing? Fret not, this year the work of two Danish directors is going to hit screens and shows no wavering in the country’s quality control. Thomas Vinterberg’s The Hunt, having dominated the Danish Academy Awards last week, is also currently one of the Oscar nominees for best foreign film. Set in Denmark, it chillingly explores the power of a rumor, as a man’s life is plunged into nightmare territory by the words of a few children. With a visceral performance by Mads Mikkelsen, this film made a massive impression at Cannes last year, winning best actor and best director whilst being nominated for the Palme d’Or and its rein has lasted right on into 2014 – receiving nominations for a Golden Globe, BAFTA and Academy Award for best foreign film – and rightly so. Unfazed by his success Vinterberg’s next project is actually an English endeavor, directing David Nicholls’ (author of One Day) adaptation of Thomas Hardy’s Far From the Madding Crowd. The cast alone is testament not only to Vinterberg’s work as a director but to the impact that Danish film is having here in the UK and the world:  Carey Mulligan and Tom Sturridge team up with Michael Sheen and Matthias Schoenaerts, best known for Jacque Audiard’s Rust and Bone. Its an unusual yet totally intriguing choice of project for the director, and looks set to be absolutely incredible. Still not enough to convince you? Then simply google Lars von Trier’s Nymphomaniac Parts 1 & 2 out this year. Jens Albinus, Jamie Bell, Uma Thurman, Stellan Skarsgard, Willem Dafoe and Shia LeBoeuf. Good or bad – this film’s provocative title and high-profile director and cast list are going to be the talk of the town this year!

For a country whose population is only 5 million people, Denmark’s rapidly growing influence on the cinematic and television worlds is extraordinary and completely justified. Get stuck in before you miss the action, because you will, I promise, regret it!