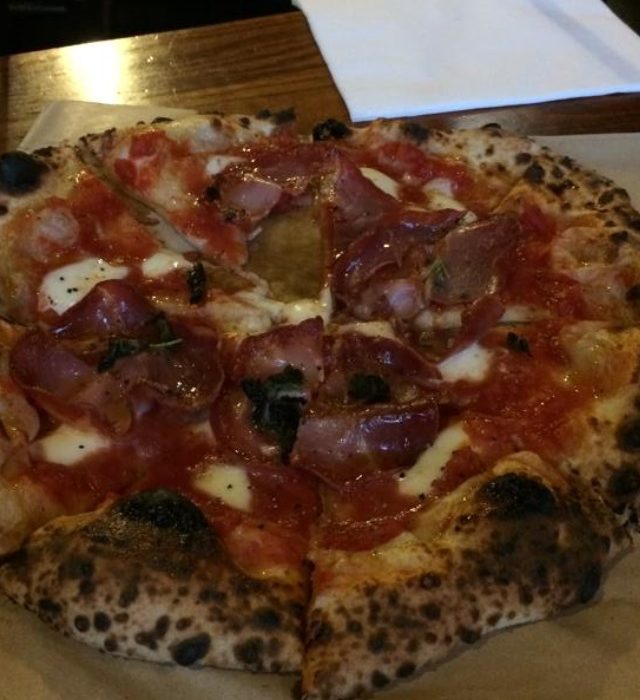 Rudy’s is a pop-up pizza phenomenon. Situated in the beer garden of Bar Fringe in the Northern Quarter, owners Kate and Jim can be found topping, cooking and serving pizzas from 4pm onwards on Fridays and Saturdays. Arriving at about 7:30 on a Friday night, the place was packed. The pub had a great atmosphere, as post-work colleagues and locals alike had found themselves starting the weekend there. The premises themselves are really cool—vintage and foreign beer ads line the walls, which also highlight the extensive list of artisan and continental beverages on offer.

We headed straight out into the garden to meet the chefs, who greeted us warmly and immediately introduced us to the company’s namesake, Rudy The Dog (apparently a pizza connoisseur). After some cooing, we perused the menu; short but sweet, with a weekly special, Jim later explained that the concise nature of their offerings comes from their firm belief in sourcing and serving only the best ingredients. The flour they use comes from a specific mill in Italy; their tomatoes and salamis are precisely chosen for flavour; their mozzarella is always fresh. Anyway, it makes sense not to overload the customer with options. When you’re relaxing with a well-deserved pint, a no-fuss, good quality pizza that promises to deliver on flavour and won’t break the bank sounds about right.

I went for the special: sausage, caramelised onions and chilli oil, and my companion chose ‘The Copper’. I am a very annoying eater, with a variety of dietary quirks which mean that unfortunately for me, a conventional crust is a no-go. While Rudy’s Pizza is looking into developing their own alternative, they offered to top any base I brought in. So after a bit of research, I fashioned myself one out of gram flour (chickpea) and sheepishly handed it over the counter. After a brief interval of reclining on the chaise longue we found in a warmly-lit corner of the pub, Kate brought our pizzas over, freshly sliced and served on brown paper bags with a napkin for mopping up. This straightforward way of serving blended really well with both the relaxed surroundings and Rudy’s Pizza’s quality-directed ethos.

It may be a risky business to lay a product so bare, but with the culinary world’s ever increasing use of gimmicks and props, the honesty of this venture is wholly refreshing. What’s more, the pizzas were damn good. Deep, rich tomato and oozing cheese was complemented—in my case—perfectly by the meaty sausage, sweet-yet-tart onion and delicate hint of chilli. Jim has a family history of baking, and it is evident that both passion and skill has been passed onto him. My companion informed me that the base was really well balanced—pillowy yet thin and crisp at the same time. I wish I could say the same for my chickpea substitute, but I can’t. It was weird; cakey and cloying and overwhelmingly chickpea-flavoured. Jim came over to check it out, and judging by the look of sheer repulsion on his face (despite a friendly attempt at congratulations), he will not be taking any notes from me.

Rudy’s Pizza at Bar Fringe does exactly what it intends to: serve simple but accomplished pizza that is fast, affordable and accessible. Crusts cleared away and faces wiped down, we enjoyed another drink—a German Weissbier and a local cider—and watched the weekend unfold.

See twitter.com/RudysPizzaMcr for updates on whereabouts and events. 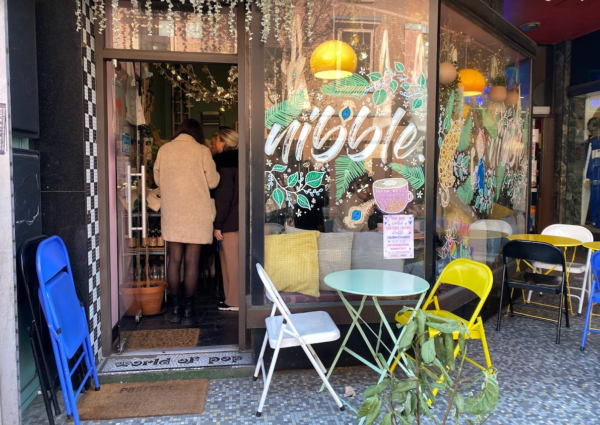 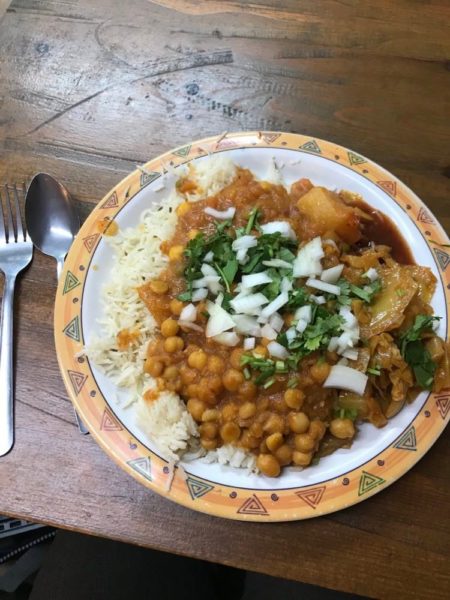