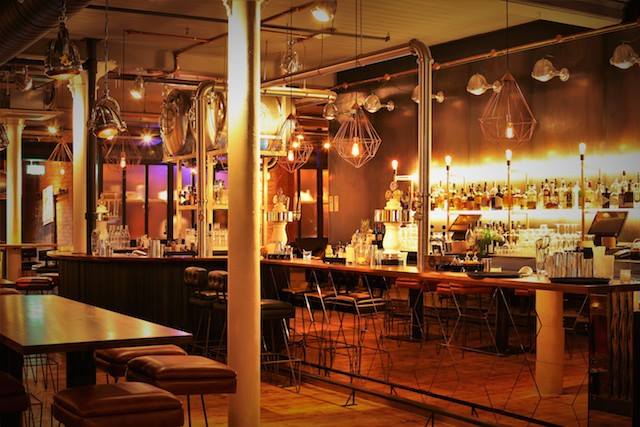 I recently read a review of Cottonopolis on the Manchester Evening News website, and it opened with the phrase ‘Sophisticated Asian eatery,’ which led me to wonder what makes a restaurant sophisticated? Perhaps, having a waiter gently graze your crotch when placing a napkin on your lap? Or, all the food arriving at your table under silver platters, cooked by tweezer-wielding chefs in tall hats. Or is sophistication determined by the number of 0s on your bill?

Cottonopolis certainly has an air of smartness in its decor, but I don’t think it was ever going for sophistication. The restaurant sits on the corner of Dale Street, above The Black Sheep Skate Shop. It’s a Grade-II listed building and former tailor’s studio, which leaves behind some wonderful architectural features like the original wooden floorboards.

Plain clothes waiters inject a casual air into an otherwise sharp setting, dimly lit by naked lightbulbs suspended in wire cages. It was only on stepping out of the restaurant, into the roar of the street, that my friend and I released how pleasantly escapist the Cottonopolis atmosphere was.

After being seated I recommended my dining partner, Mr. Schmidt, try a pint of Krusovice, a Czech beer from a town of the same name in Bohemia. Although I’m not opposed to liquid Wednesday lunches I had a lecture later that day, but someone had to try it. While I stoically sipped my coffee, Schmidt was sinking very nicely into his pivo.

The menu, devised by Joe Grant and Alastair Long, both of Australasia heritage, is split into four categories: Ice, Fire, Steam and Oil, a quintessentially Northern Quarterian vogue style of menu layout. Where Cottonopolis does buck the NQ trend is with its food. It is refreshing to see a new restaurant that’s not serving the standard pizza or tarted up American comfort food. The menu is a spectrum of Asian cooking, drawing largely from Japanese influences with dishes like sashimi, sushi, yakitori, and tempora. There is also a  Chinese element with a selection of baos, and a small Korean contingent with Kimchi on offer as a side.

We opted for one of each, yellowfin tuna nagiri, chicken yakitori with a sweet soy mirin glaze and a peanut sauce, pork belly bao’s also with a peanut sauce, and salt and pepper squid with Japanese seven spices, rather than the Chinese five.

The tuna wasn’t the best quality; we had two opportunities to try it, because a delay on our chicken resulted in a complimentary tuna sashimi. It tasted better over rice with wasabi and a few sesame seeds, but when standing alone it a left something to be desired. The squid was great, not in any way chewy, and a first time try for Mr. Schmidt, who inevitably had “a lot of time for that”. The bao was ok, not my best, not my worst, but it didn’t need the peanut butter-esque sauce.

When the chicken finally arrived it did benefit from the peanut sauce, and when squeezed over with the lemon and swirled in the glaze, the whole thing came together really quite nicely.

I’m all for more Asian food in Manchester, and especially more Japanese food. With ramen tipped as the next big thing, on #2016foodtrendwatch, and London ramen chain Shoryu set to open a branch in Piccadilly later this year, it looks like the sun in Manchester is very slowly rising in the east.

Coincidently Cottonopolis does offer ramen, but as a lunchtime special with ribs for £8.00. Ramen is something that requires meticulous preparation and deserves fresh noodles, and this lunchtime deal looked a little throwaway, so I didn’t risk it. Like ordering ramen at Wagamama’s, the Mcdonald’s of Asian food, you would always leave disappointed.

Having admitted that ramen, Japanese soup noodles, requires meticulous preparation and fresh noodles, I’m now going to reject all of that and tell you how to make budget, easy ramen broth.

With the stock cubes make up 1L of stock and pour into a large pot, bring to a gentle simmer then add the dried shiitakes. After about 35-45 mins remove the mushrooms and set to one side, these can be added to the dish later. Add the sesame and soy then simmer for a further 45 mins. When the broth is ready prepare some noodles and when they are al dente run them under cold water to stop them cooking, they will soften up more when added to the broth. At the same time, soft boil an egg for 6 minutes and 20 seconds, then run under cold water to stop it cooking before de-shelling and cutting in half. Finely slice a spring onion. When all this is done, pour a few ladles of the broth into a large bowl, place in your noodles then arrange the egg, spring onions and pieces of bamboo around the outside. The broth will keep happily for a week or can be frozen for later use.