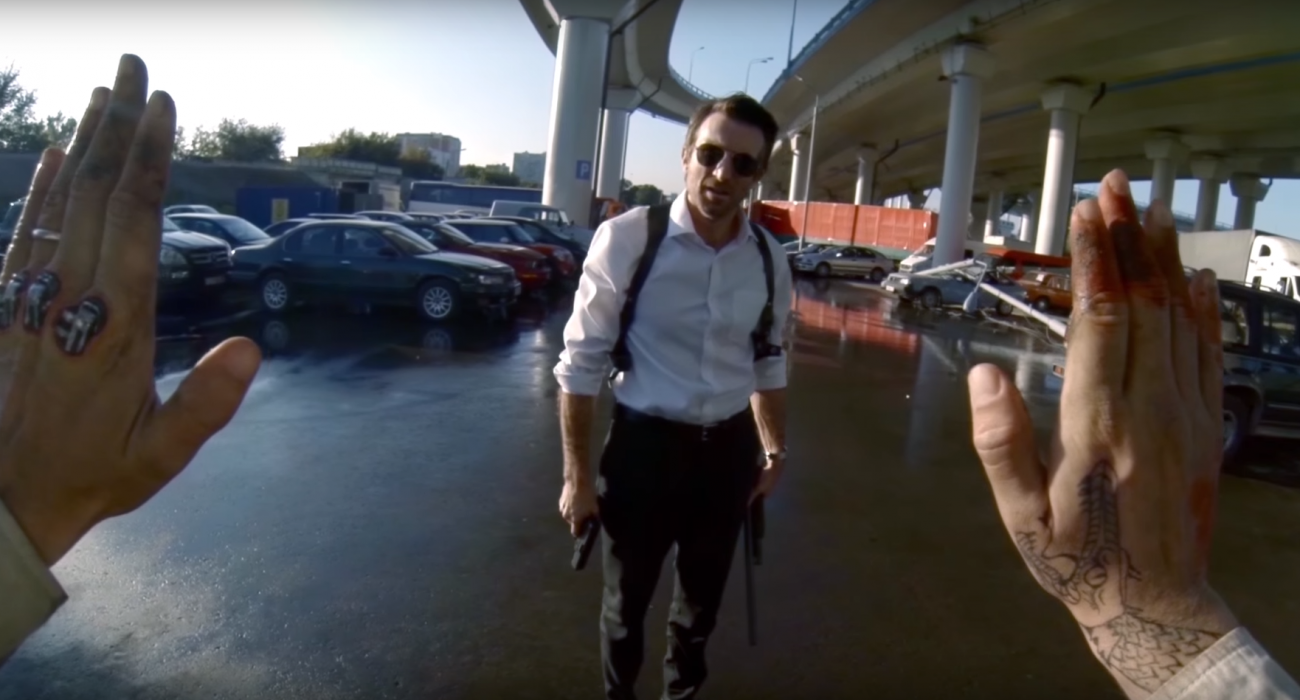 So we’re in Russia some time in the future and Henry is a cyborg and he’s on the run from an army of bad guys and he’s got this really hot wife who he’s trying to save and… oh, I don’t know. I really don’t know…

These were roughly my thoughts as I tried to grapple onto a storyline during the bizarre, enthralling Hardcore Henry after walking into the screening 15 minutes late. It was tough going for a couple of minutes. I had literally no idea why Sharlto Copley’s character kept getting killed but was able to respawn like Kenny from South Park, each time in a radically different guise. I had no clue why Henry (or as per the first-person viewpoint, I) had superhuman strength and an indestructible body, or why an albino telekinetic villain was trying to kill him(/me). I still don’t.

The funny thing, as I found out later, is that even if I’d seen the first 15 minutes, I’d have been none the wiser. Hardcore Henry makes no attempt to explain itself. There is no why. What’s more, however, is that this really doesn’t detract whatsoever from your viewing experience once you learn to let go of any hopes of enlightenment, which I did after about three minutes of intense and stunningly choreographed action. Unless you’re the type of person to agree to go on a rollercoaster only to complain the whole way through that it doesn’t contain enough subtext, you are going to enjoy this film. Hardcore Henry ploughs through all of its 90 minutes with such ferocity, velocity, wit and mischief that it obliterates the need for a narrative.

I’ve read reviews of this film bemoaning its lack of character development or plot cohesion, but who says every film needs those things? I’d hate to break it to Robbie Collin of The Telegraph or Jordan Hoffman of The Guardian, and I hate to name names (I really don’t), but a film doesn’t absolutely need a “plot or characters worth caring about” for it to be a success, and I don’t need to be an idiot to be titillated for an hour and a half by explosive action scenes, great one-liners, mesmerising camera work and an amazing soundtrack. But judging by both writers’ depressing and rather insulting write-ups, what I need is a good film theory course and a giant rod up my arse to put me right and ensure I don’t enjoy this kind of lowly trash anymore.

I prefer to focus on the positives. The only two performances of note in the film are both played with a devilish sense of fun. Copley, playing at least 12 different characters, enjoys the same hilarious freedom that Denis Lavant was given in Holy Motors, while Danila Koslovsky’s Scandinavian villain delivers a wealth of bad-guy-zingers with a delicious drawl. The camera-work is also pretty astonishing, managing to create something stylish and cinematic with GoPro cameras, which make for far smoother viewing than the alternative hand-held “found footage” style that otherwise might be used for the same effect. As with The Revenant recently, this is one of those films that will have you questioning just how the hell it was made.

The film is designed and structured to look and feel like a video game, and it does so thrillingly. It’s clearly sub-divided into different ‘levels’, with ‘checkpoints’ in between to space out the action, and dozens upon dozens of useless henchmen for Henry to kill in extravagant ways. There’s also a soundtrack to rival that of any video game (Tony Hawk’s Underground included), full of heavy techno or eclectic choices to accelerate or juxtapose the comically graphic violence (for instance, watch as Henry carves out the heart of another cyborg while Devendra Banhart plays overhead). Far from being a pale imitation, the film is a glorious homage to video games, which are usually far more creative than given credit for and hardly deserve to be treated with such snobbery. Nevertheless, the movie is no doubt far more enjoyable if you’re familiar with first-person shooter games and are able to spot the tropes. For those who are, nostalgia is everywhere—the sniper vision, those sweet clinking sounds of a reload. For those who aren’t, there’s plenty else to enjoy.

­So, before you read a predictably humourless review of Hardcore Henry in The Guardian, consider that the two major criticisms levelled at the film—its likeness to a video game and its lack of a substantial plot or proper characters—are well within its intentions, and consider how ludicrous it is to measure a high-octane thriller using the same metrics you’d apply to Schindler’s List. You can’t expect a fish to climb a tree, and you can’t expect Hardcore Henry to make you think too hard. If there’s one thing it did make me think, though, it’s this: film critics can be real saps.