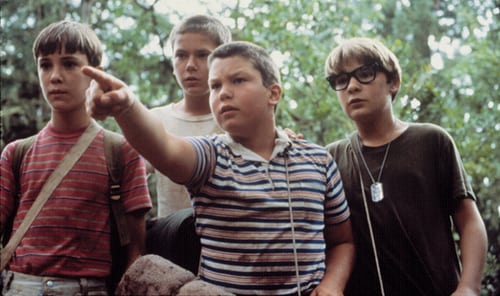 For those of you who have yet to experience the magic of Stand by Me, you really are saving the best until last. Directed by Rob Reiner, the film retells Stephen King’s novel The Body in cinematic form via the screenplay adaptation created by Raynold Gideon. The film takes the audience on a journey back in time as a writer recounts the year that four young boys named Gordie Lachance (Wil Wheaton) Chris Chambers (River Phoenix), Teddy Duchamp (Corey Feldman) and Vern Tessio (Jerry O’Connell) all went searching for the body of a missing boy near where they lived. On the surface, the film is simply about four young boys all seeking some mischievous adventure and wanting to be the heroes of their town but as the audience become immersed in the film, they soon realise that the story being told is a one of great sentiment and importance.

Stand by Me is a film about childhood, friendship, and nostalgia, which undoubtedly set the bar for ‘coming of age’ films during the fantastic film-making years of the 1980s. It has a gritty yet colourful use of aesthetics, which fits rightfully with the story, and messages of the film.  No matter how many times you watch Stand by Me, you are always left with that same feeling of emptiness while simultaneously overflowing with emotion; a quality telling of an all-time classic. A film that can make you feel something more than you do in day-to-day life, and make you consider things you otherwise wouldn’t is a film that will continue to live on years after its original release. That is why Stand by Me is still worshipped to this day as one of the greatest films of all time.

The portrayal of the four young boys by the actors is remarkable. For such young actors, they are all able to convey their respective characters with astonishing skill, and are able to charm the audience into caring for King’s lovable gang. With the help of the screenplay, they provide us with comedy, they provide us with despair and they provide us with hope. Wheaton’s and Phoenix’s performances are indescribable, in the sense that they somehow make the characters of Gordie and Chris appear to be two boys who are way ahead of their time, and present a friendship like no other. Phoenix’s final scene in the film has become fuelled with more sadness than originally anticipated over the recent years, as we now know that the young boy who leaves our screen has now left us for a  lifetime.

Thirty years has passed since Stand by Me was released in the USA back in 1986, but it still remains to be one of the most loved films within film history. Although Stand by Me was nominated for an Oscar and two Golden Globes, no prestigious award could ever represent the emotional impact it had and continues to have on its audiences. It has earned its place in so many people’s hearts, and is a film that has become to mean so much more over the years than it could ever have initially intended. Stand by Me is a film that will continue to live on just as the messages and morals that it depicts always will.