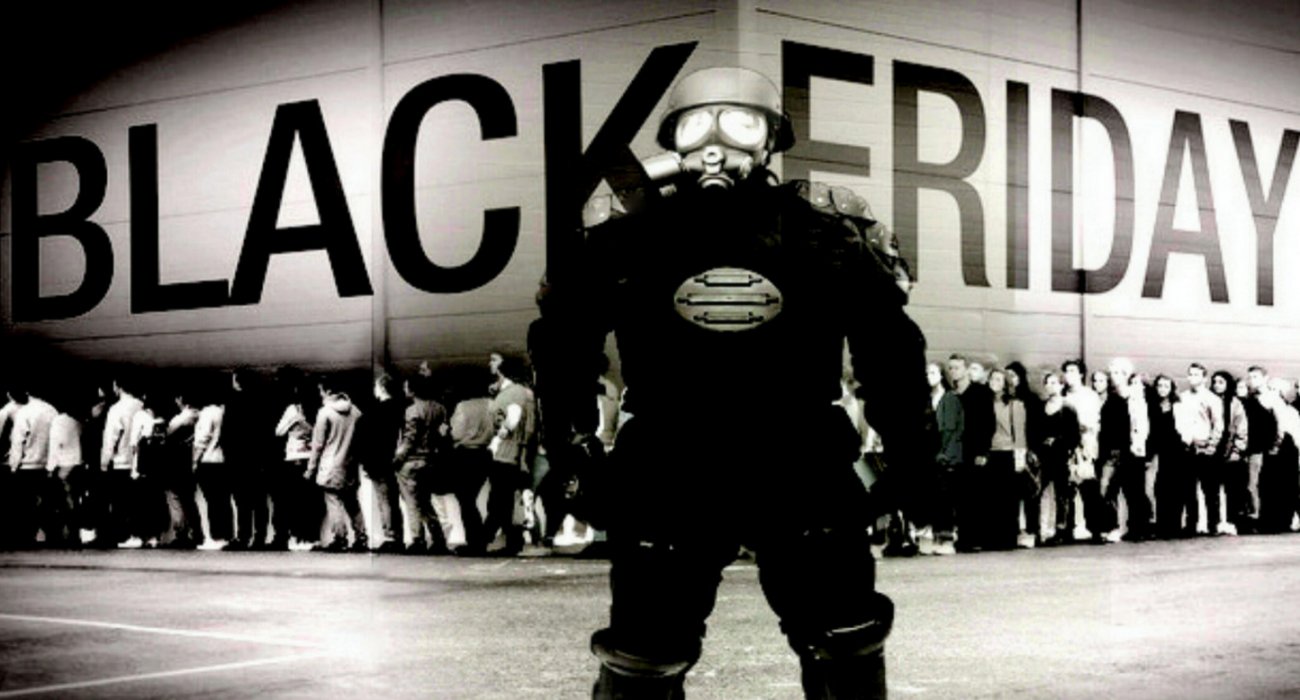 As November comes to an end, Americans celebrate Thanksgiving and “the day after Thanksgiving.” For some reason, so do we. Their four-day weekend makes Black Friday the perfect day to attract customers with low prices and crazy offers. Here in the UK, with no historical nor logistical reasons to observe this day, shops are having their very own Black Friday sales. On the either side of the pond, one thing is for sure: consumer culture is more alive than ever.

We were born and raised in the age of consumerism and ultimately, we know no other way of life. Hypocritically, our complaints have been  over-done by now. But, as time goes by, we get more and more sucked into this excessive lifestyle: Kylie Jenner has got us waiting on her lipsticks, Kanye West on his Yeezys, and Rihanna on her Creepers. Just last Saturday, customers waited outside of FootLocker from 8am to get the new Adidas Ultra-boosts. They sold out so fast that even an employee working there at the time did not get the chance to grab a pair — all this because Kanye wears them.

Producing limited quantities of celebrity-created, or even merely celebrity-endorsed, products for a limited amount of time almost makes the matter one of obsession. Out of personal experience, and after failing three times already, I am going to keep trying to catch at least one Kylie Cosmetics release.

There is something about the thrill of “winning” and getting the lipsticks in the six minutes before they sell out that makes you forget just how much your spending, or, more importantly, that you are getting really competitive about an over-hyped make up collection. It makes you feel like you are part of something bigger, that you are in a community with millions of others who share the same interests.

Apps such as Snapchat and Instagram bring celebrities so much closer to us, the images of their lives become far easier to relate to. It becomes an almost personal endeavour to support Kylie on her newest launch. Even these apps — which are, ironically, free — flood us with advertisements at every tap. It is a process of globalisation that reaches so far into our pockets, we don not even seem to notice.

Our obsession with celebrity lifestyle has even found its way into the recent US elections. After the results, many turned to analyse Hilary Clinton’s heavily reliance on celebrity endorsement to generate youth appeal. For example, Beyoncé often performed at Clinton’s rallies, casting a different light on the presidential candidate’s campaign. This aura of fake political legitimacy “yas queen slay”-ed Clinton all the way to losing.

Our consumerism, namely that of pop-culture, has crept its way into the political sphere, almost belittling it. The election was not a pure democratic process — it was a sad, drawn-out reality TV episode. The world has become so used to Keeping up with the Kardashians that America’s only way of keeping politics interesting was by electing a President who engages in constant Twitter wars with fellow celebrities.

And as much as Trump would like to deny it, this consumer culture is not just harming us, it is also harming the planet. In fact, the only shred of hope in this constant rise is that consumerism may be reaching the apex after which we can hope it will decline. With rising populations all over the world and the majority of us now increasingly living in urban areas, the dangers of our excessiveness have gone beyond potential threats — they are now a concrete reality.

Consumerism brings with it gas-guzzling cars, plastic water bottles, and takeaway menus. It necessarily displaces money into the hands of the wrong, rather wasteful people. The money we hand over to said-celebrities and designers — some more so than others — goes towards their animal-tested, toxic-waste-producing products. All the while, we advocate for recycling and reducing our carbon footprint, oblivious to the fact that our daily lifestyle is a threat to life itself. While we often cannot escape the over-powering consumerist narrative, we could at least be more conscious about where we spend our money.

For now, commercialised holidays are just around the corner. Christmas movies and songs are all the rage — all pushing us to show our loved ones we care in the only way we know: spending. It is not even December yet and I have already lost my chance of getting the Kylie Holiday Collection. Consumer culture has changed the holidays from a relaxing time with family and friends into a fast-paced survival-of-the fittest scenario, and we are too weak to do anything to resist it.

The world has not always been this way. Soon enough, we will realise that we do not need to be so blindingly impressed by big names — nor will we need the constant flickering on our social media accounts of the minute, day-to-day details of people’s lives that are so far removed from our own.