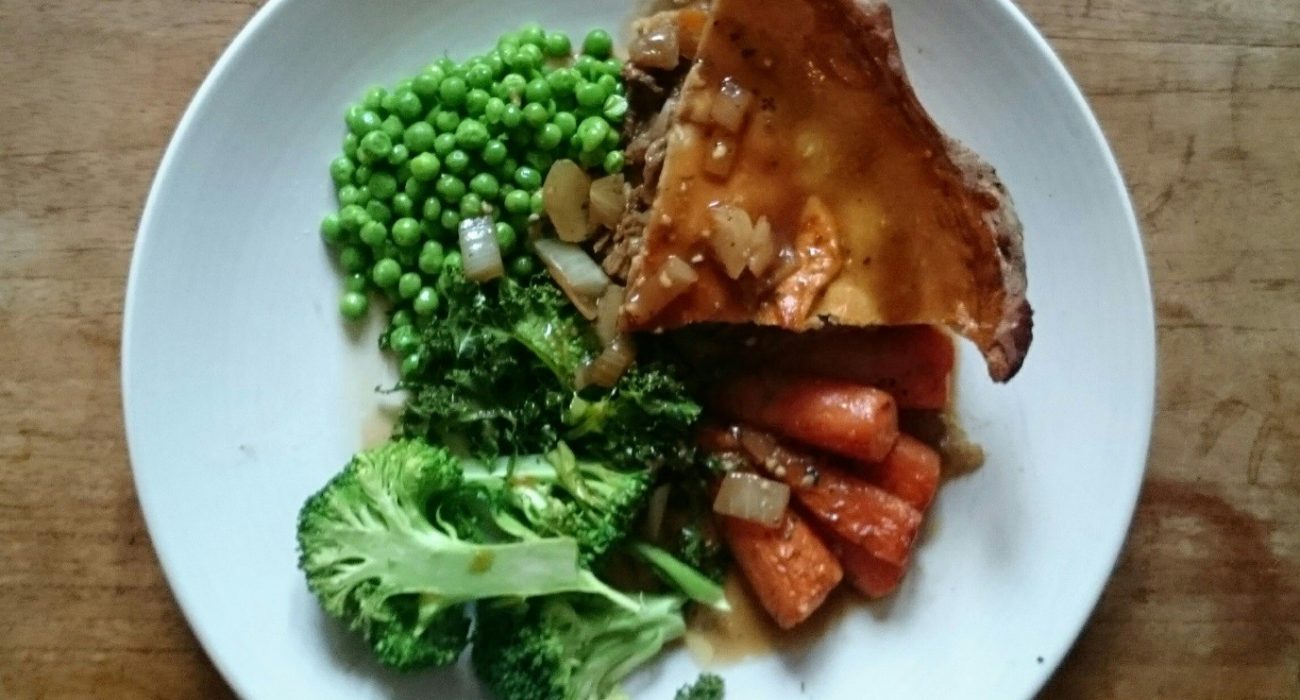 The Life of Karen and her Pi(es)

The Fallowfield Buy/Sell Facebook group has over fourteen thousand members, if you are one of those members you may well be familiar with Karen Everall’s pie delivery service or the pink wig she wears in her profile picture.  Karen has been using the Facebook group as a platform to promote her Deli and homemade pie delivery service to the student market. Last weekend I ordered a range of Karen’s pies and invited her in for a chat about her business.

Me: Do you have a background in catering?

Karen: Not really no, I opened my Deli back in December 2015, so it’s been running for just over a year. I used to work in housing before, but I’ve always been making pies, pastries, quiches, and things like that. Before I started the Deli I was mainly baking on request for friends parties.

Me: Whereabouts is your Deli?

Karen: It’s in Heaton Chappel in Stockport, about 3 miles down the road from the Fallowfield area.

Me: So do you always cycle the pie deliveries from your Deli?

Karen: Pretty much! Most of the time, I can get about a maximum of 4 pies in the basket of my bike. Occasionally I will get the bus if have an order bigger than that.

Me: What gave you the idea to use the Fallowfield Buy & Sell Facebook group, and get the student market?

Karen: Just before Christmas I started advertising on social media in the Stockport area, and I had about 50 orders for pies all over Christmas. So that gave me the idea to look at some other buy and sell groups from around the Stockport area, and I thought I’ll try the Fallowfield one. I tried other ones as well and didn’t get much response from them, but the Fallowfield group seemed to generate a lot of student interest.

Me: So is it just pies you sell at your Deli?

Karen: No I sell homemade bread and Lasagne as well, I do my own focaccia bread, and make focaccia sandwiches to sell at the Deli. I’ve also started to make quite a bit of Spanish, ‘Tapasy’ food for things like parties.

Me: What was the inspiration to leave housing and start your own Deli?

Karen: I got redundancy, they basically paid me lots of money, and I’ve always wanted to start a Deli, so I used the money wisely, or unwisely maybe to set up the Deli.

Me: I probably should have asked this earlier, but what is the name of your Deli?

Me: Do you have aspirations to grow the business?

Karen: I would definitely like to grow the business, the problem is that it isn’t that busy at the moment. I think Heaton Chapple is the wrong area for my Deli if I’m perfectly honest.

Me: There is definitely a large student delivery market in Fallowfield and Withington, which has potential to be very lucrative.

Karen: Yes, I might possibly look at moving my business, as I’m not getting the kind of footfall in Stockport I would expect at the moment. One of the various options I’m looking at is possibly running the pie delivery business from home.

Me: How many covers of pies are you doing a day, and which flavour is the most popular?

Karen: The most popular I would say is the lamb and roast garlic, most people are going for that. The amount of covers seems to depend on the time of the year, the pies were very popular around Valentine’s Day, I did about 15 covers that week mainly in a heart shape. But I would say it is normally about 7 pies on an average week. I’m expecting a surge around Mother’s Day and Easter, as people tend to have parties at these times of year, and everyone likes pies at parties for some reason!

Me: Do you have a favourite cook-book?

Karen: I used the Paul Hollywood bread book when learning how to bake bread, but when it comes to pies I’m open to trying any new recipes. Lots of customers come to me with ideas for pie fillings, a recent suggestion is the butter pie which is a Lancashire delicacy apparently, something I have never heard of before, it is basically just potato and butter in a pie! Really, really basic, apparently the recipe comes from Preston.

Me: What is the inspiration behind focusing your Deli on pies?

Karen: I just love pie! It’s because I just absolutely love the taste of pies, and there are so many different flavour possibilities to experiment with. I also like the slight romance of decorating the tops of pies with pastry lettering, I can take requests to put names on top of the pies.

Me: What would your Desert Island Pie flavour be?

Karen: I think I would have to keep it classic and basic, as I really like the cheese and onion as it is so different from all the meaty flavours. My personal recommendation: Chicken, Leek & Mushroom. Someone else has been requesting a feta, roast squash and roast veg, which I haven’t made before but am planning on trying.

Me: How big is the oven that you have in the Deli?

Karen: It is just a standard size oven, but I have a stone pizza oven I can use as back-up if I get a rush.  But normally I’ll just run the pie business out of the standard size oven, and a slow cooker to increase the flavour of the fillings. For the Christmas surge, I was up till 2 in the morning baking pies on the night before Christmas Eve and then set my alarm at 5 the next morning as I had 4 more pies to bake.

Me: Are most of the deliveries to student houses?

Karen: For Fallowfield its all students houses and halls, in Stockport it’s families that are ordering the pies, and I get quite a lot of orders of the smaller, two-person pies from elderly people.

Me: Are you running the Deli on your own?

Karen: I do run the Deli on my own at the moment, I have help a couple of days a week, or if I’m running pizza parties for kids or kids cooking sessions, so if there’s anything like that going on I’ll get a bit of help. The Deli is running three days a week at the moment, as early in the week is generally really quiet. I’ve actually got a part-time job back in housing, working for a private landlord to put some money back into the Deli, so that I can get it fully running and more profitable on the busy weekend days.