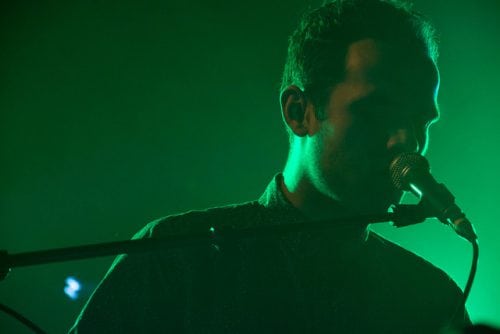 Jordan Rakei makes for easy listening. Soulful but not heart wrenching, jazzy but accessible, nostalgic but modern, yet translating the smooth sound of Rakei’s music into a live set proved an uncomfortable transition.

Gorilla was a solid setting for the gig. The sound system seemed to muddy some of the clarity Rakei’s recorded work is perforated with, but for an understated act like Rakei, the intimacy Gorilla provides is always welcome.

Before the meat of this review is fleshed out in it’s rotting core, it must be noted that the music was of unquestionable quality. The band was capable and tight-knit, providing clean instrumental passages between songs, sprinkled with pretty melodies and tidy riffs.

We remain fans of Jordan Rakei’s recorded music. He provides the odd track that if played at a mate’s house will convince them you are Fallowfield chic.

Now, onto the rot…

Whispers of “Is that him?” followed Rakei’s discreet and unceremonious arrival on stage. From this point onward Rakei failed to grab the audience. Methodically switching between more chorus focused tracks into longer and less known cuts left the set feeling robotic, failing to hypnotise or galvanise the crowd, and finding an uncomfortable limbo somewhere in between. That being said, the quality of musicianship kept the show palatable.

Rakei’s distinctive vocal delivery was sharp as ever, yet as a live performer, he and his band seemed to lack charisma. The closest thing to passion came from the occasional screwed up face of the guitarist at a jazzy lick and the bouncing heads of the drummer and bassist. It was reserved, to say the least.

The night ended with a flaccid encore. Rakei upped sticks without playing his most famous song ‘Sorceress’. A light natter arose in the crowd, more a feeling of “Is that it?” rather than a chant of “We want more!” After an awkwardly short five-second absence, Rakei was back.

The encore is a regular element of a live set, but Rakei’s music is not and never will be rousing. A set which emphasised musicianship with less robotic planning would have better played to Rakei’s strengths.

He is a talented artist, but not a performer.