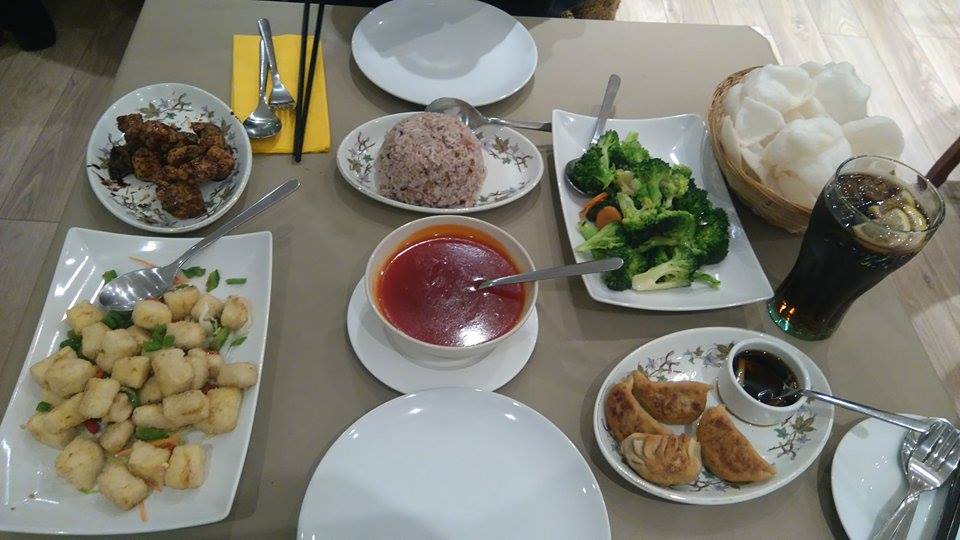 On the rainy evening of the 14th of February my friend, the meat-eater, and I, the vegetarian, hopped on the magic bus for a much anticipated meal at Lotus restaurant.

Although it took us 20 minutes or so to get there, the bus dropped us off right in front of the restaurant which was very handy. It opens at 5 pm and we reached there at 5.45 pm without any prior booking. The restaurant was already packed yet we still managed to get a table as the staff seemed reluctant to keep customers waiting.

The restaurant wasn’t extravagantly large yet the staff demonstrated a real enthusiasm for hosting their customers. The restaurant was obviously themed for Valentine’s Day and a pleasant ambience was created with heart shaped balloons tied to the chairs.

Once we were seated, the waitress came to ask for drinks and also handed us two roses, which was a really nice gesture.

After settling down, we sifted through the never-ending menu. As this restaurant is 100 per cent vegetarian and vegan, we expected a limited number of dishes on the menu but surprisingly it had quite a few choices.

These included soups, starters, mains, noodles, side dishes, rice dishes, noodle soup dishes, vegetables, and tofu dishes, drinks, and desserts. After much contemplation and discussion we finally ordered two starters of grilled veggie dumplings and sesame seed veggie prawn toast, three mains of sizzling veggie beef in black bean sauce, veggie chicken in Kung Po sauce, and veggie meat strips in peking sauce. Upon ordering our food the waitress also asked us whether we wanted our dishes to be vegan or vegetarian — yes there is a difference!

My hard-to-impress meat-eater friend said that the texture of the chicken was good and the dish was a convincing replacement of the real deal. The Kung Po sauce was blended with peanuts and gave the vegetables and the chicken a juicy flavour. Next, with the right amount of crispness, the sesame seed veggie prawn toast satisfied my taste buds to a whole new level! It was not too oily which felt moderately healthy and really enhanced the flavour. All in all the portion sizes were generous and the food was delicious, I can not recommend enough!

Then came the ‘sizzling’ veggie beef in black bean sauce, which was nice and hot. It was a creative mix of cauliflower, carrots, mushrooms, veggie beef, and black bean sauce. We then tried the grilled veggie dumpling together with a ginger flavoured filling, unfortunately ruining the overall taste of the dumpling. The dip which accompanied the dumplings was disappointing and we had to request a different one instead.

Veggie meat strips in peking sauce was the last dish on our list. As it was marked spicy on the menu, we expected it to be fiery and blazing. To our frustration we found it sweet and although it had a good texture and flavour, it was not a convincing substitute for meat.

To our surprise, we received a complimentary dessert at the end of our meal! We were served two heart-shaped black bean jellies and a sweet potato flower cake — so romantic! The tasty black bean jelly melted in the mouth. However the sweet potato cake had an usual taste.

Once we were done, we paid our bill by cash — no cards accepted. I plan to go back to Lotus to try more of their tasty dishes. It is very reasonably priced so it’s apt for students and a must-try for people who don’t eat meat, who are trying to quit meat or even those who love eating meat!