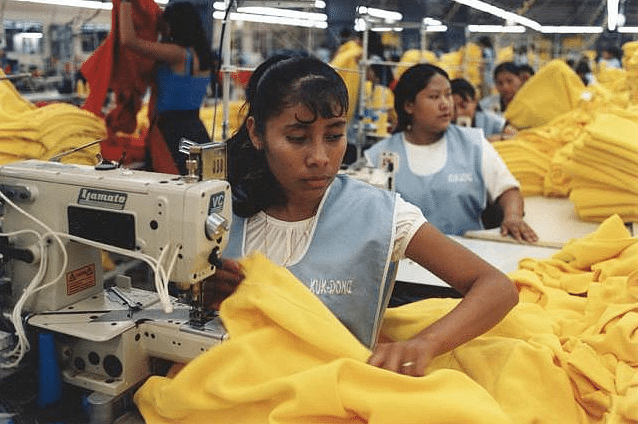 Ethical Fashion: What it says on the label?

Have you ever experienced that niggling sense of guilt when you fill your Primark basket full of cheap £5 buys? Not least because you really shouldn’t be spending the last remains of your student loan on two new pairs of leggings and four more tops that you could easily live without. But is that guilt really because you are aware of the outrageous conditions in which these products are made and by loading your wardrobe with cheap clothes, you are participating in the underbelly of the fashion industry? That is the world of sweatshops, of below living standard wages and of the waste that is involved in fast fashion.

Primark’s low prices point to the obvious fact that somewhere down the manufacturing line, most likely right at the bottom, someone is losing out on the income that is rightfully theirs. There are not many high-street retailers, however, who have a clear conscience. Even the Organic and Fair Trade ranges of certain retailers cannot claim to be that much more ethical than their standard counterparts. The Ethical Consumer’s study of the social and environmental records of companies only award New Look Organic Clothing a rating of 10 out of 20, compared to scoring New Look’s normal clothing range 9 out of 20. Sainsbury’s TU Fairtrade clothing is marked as an embarrassing 3 out of 20 whereas Tesco F&F Fairtrade range only scores 2 out of 20. How can we be responsible shoppers when we are presented with information that is not wholly truthful?

More expensive companies are no more innocent. A report by the International Textile Garment and Leader workers Federation, comprising of 83 factories in Indonesia, Sri Lanka and the Philippines, reveals the working conditions of labourers for top high street brands such as Abercrombie & Fitch, Ralph Lauren, GAP, Nike and Forever 21. It was found that on average 10-40 hours of overtime a week was undertaken, workers were subjected to verbal and physical abuse by supervisors and management and not one factory paid a living wage. Furthermore strikes and unions are banned. In less developed countries, where living conditions are so poor and chances of finding a better or even another  job are slim, employers know they can capitalise upon this situation by exploiting as much output from their labourers as possible.

So why don’t high street retailers do more? Whose responsibility is it? Attitudes of ignorance (or is it avoidance of the truth?) will always be more common when our own pockets are running dry. When there is a choice between a £10 jumper and a £45 Fairtrade jumper, the morality of this decision often goes by the wayside. It becomes a question of reasonability. Is it us the consumers who must act, by boycotting certain retailers for their lack of ethical trading? Or is it solely the reasonability of the retailers to support their workers and to promote and create long term improvements in living standards for their labourers? However, with lack of understanding and knowledge on which retailers uphold good standards of pay and labour care, how are we expected to make responsible decisions?