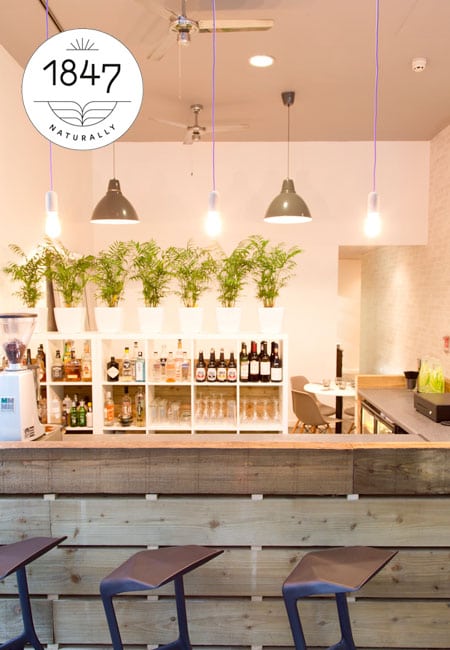 The debate between omnivore and vegetarian can be likened to that of Christian vs. atheist and left vs. right. It is ongoing and often inconclusive. When I’m being meat-shamed by a vegan, I tend to remain passive, but sometimes I’ll play the devil’s advocate. Hypothesising that the life of a carrot is equal to that of a pig; sentience is not a factor.

My current diet isn’t as meat-centric as it used to be. I, like many others, have been driven towards a vegetarian diet because it’s cheaper. There has been a noticeable shift in the perception of vegetarian food, even in the last five years. Chefs like Rene Redzepi and Yotam Ottolenghi will champion the cauliflower over famous cuts of meat.

Damien Davenport, the owner of the vegetarian restaurant 1847, operates in the same vein. What initially attracted me to his bistro, nestled in the shadow of the Manchester Art Gallery, was the re-appropriation of classic dishes for a vegetarian audience. For example; Beet Bourginion.

I went for a Thursday night dinner with the charming Mr Kean, a political commentator and musician. To our surprise, the drinks menu was not a list of grass-based smoothies, but a pretty eclectic mix of beer and wine. Meantime London Lager, from a Greenwich-based brewery, delivers something akin to a German pils. I opted for a wonderful glass of American Merlot.

The atmosphere is just shy of sterile, lots of white paint and glass. A large mirror leans against one wall. Small, leafless trees float from the ceiling. I suppose the diners provide the colour.

I started with the Crispy egg, which I ordered out of curiosity more than anything. A soft-boiled egg coated in panko breadcrumbs. Really excellent, easily one of the top-five eggs of my life—a much deliberated list. It came with a celeriac and pearl barley risotto. The texture was perfect. My companion had the onion bahji, which was authentic and what you would expect from a good bahji and raita.

‘Fish’ and chips substitutes a real fish with lightly ginger ale-battered chunks of halloumi. Perhaps a subtle middle finger to the hypocrisy of pescatarians? It was delicious, accompanied by serious triple cooked chips and pea and basil emulsion. The whole dish was tied together by an inspired savoury lemon curd. Mr Kean’s Merguez and Mash was our least favourite. The merguez sausage was replaced by a lentil spring roll, the puy lentils lacked in flavour. But the turnip mash and red onion gravy did provide a rich, hearty garnish.

After being lectured, by my friend, on the pitfalls of the pudding dogma rife in today’s dining society, we declined to see the dessert menu. I did notice some pears being ferried to a nearby table, seeing as we are right in the middle of pear season, this provides some evidence that the winter menu is to some degree seasonal. A lot of restaurants claim seasonality because it is rather on trend, but only occasionally shuffle things around and keep favourite dishes on the menu for months.

The meal came to £23.50 a head. A very reasonable price for two courses and a drink, and the amount the average student will blow on a rather inconsequential night out without even blinking.
This meal certainly changed what I think about vegetarian cuisine. Despite being so accustomed to meat or fish as a focal ingredient, I didn’t for an instant notice their absences. What’s more, you leave the restaurant feeling full, yet relatively light. Unlike limping out of a steak house feeling sluggish and dripping with meat sweat.

1847 was the year in which the Vegetarian Society was founded here in the North West. It is not a stretch to see Davenport as a continuation of that legacy, and his success speaks volumes with additional locations in Birmingham, Bristol and Brighton. With V-Rev, a vegan diner, set to open in the new year as a continuation of their current Oldham Street location, there seems to be an interesting future for vegetarian cuisine in Manchester.